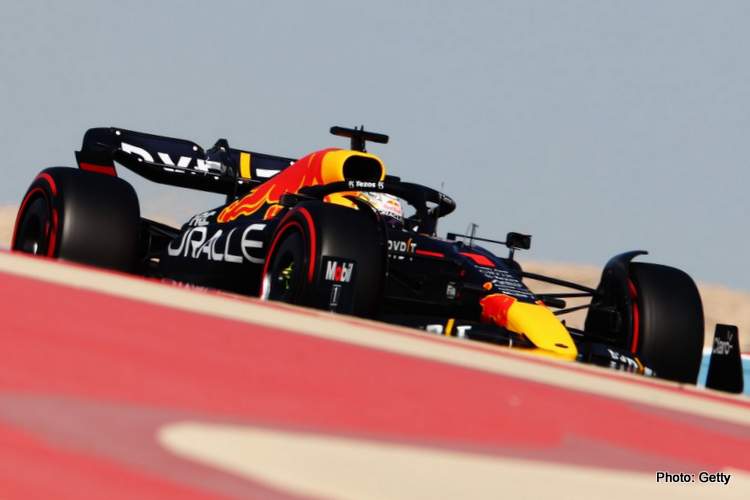 Max Verstappen remained in good form at the end of the final practice session in Bahrain taking top spot with a lap time of 1:32.544.

The important thing from FP3 was that Mercedes showed improved form, and was not looking as bad as they did on Friday. Have the Silver Arrows been given an antidote to “porpoising”?

Charles Leclerc survived his mid session spin to take second behind Verstappen 0.096s off the pace.

With FP3 done and dusted, we drew one step closer to finding out the real pecking order of 2022 F1, with qualifying being next, and there is no hiding then. Every team will set out to get the best grid position for Sunday’s race, no sandbagging, no mind games, nothing but 20 drivers on the limit in their brand new cars.

As usual, FP3 is the last chance for all the teams to do the final setup work on their cars, try to find that performance sweet spot to go into qualifying.

Notably from Friday’s running, other than the obvious Mercedes performance problems, was the fact the all Mercedes cars were down on top speed at the speed traps, with Alex Albon the fastest of the Mercedes-powered brigade at 312kph.

With Mercedes’ “porpoising” issues, it would be likely that the team have turned the power unit down to avoid the bouncing, but having Mercedes-powered teams in the lower half of the order on top speed is something worth noting, with Grandprix247’s Mark Kay saying: “I suspect there is an E10 performance issue.”

Moving on to FP3, it was a slow starting session, as with over ten minutes gone, only the Alfa Romeo drivers, Valtteri Bottas and Zhou Guanyu, were the drivers to register timed laps.

Mercedes were reported to be testing the DRS on George Russell’s car, as the system was proving troublesome on Lewis Hamilton’s car on Friday.

McLaren’s Daniel Ricciardo was delayed as well and was in action with 42 minutes remaining, as the team was still working on the water leak in his MCL36 which occurred on Friday, the team opting not to break curfew to fix it.

Almost halfway through the session, Ferrari’s Charles Leclerc had a scary moment, while on a timed lap, at Turn 11, but managed not to hit any barriers, and also drove out from the gravel trap without any assistance.

AlphaTauri’s Yuki Tsunoda who received a reprimand from the stewards for blocking Leclerc during FP2, did not take part in FP3, as his AT03 suffered from hydraulic issues that prevented him from taking part in the session.

The Mercedes due enjoyed a brief moment at the top of the time screens, Hamilton going fastest at one point, the Russell, before relinquishing their top spots.

As mentioned it was Verstappen who took the top spot as we come closer to qualifying, albeit with a best FP3 time 0.608s slower than his best time in FP2 on Friday.

Charles Leclerc showed that he is still in the chase with second place 0.096 slower than the Dutchman.

Charles Leclerc spins at Turn 11, where he went off on Friday

He is able to keep his car rolling and get back on track#BahrainGP #F1 pic.twitter.com/1PUQIPBriC

Sergio Perez came closer to the fight at the top with third place, the Mexican 0.247s off the pace of his teammate, as George Russell put Mercedes in fourth place almost four tenths shy of the best time.

Not good enough maybe in Mercedes’ standards, but definitely better than Friday’s showing. More speed in the Mercs’ armory?

Fifth place went to Carlos Sainz in the sister F1-75, the Spaniard having a best lap of 1:33.053, and was followed by Lewis Hamilton who was 0.068s down in Sainz, over a tenth slower than his teammate Russell.

Zhou Guanyu was over a tenth adrift of his teammate in ninth place, as Aston Martin’s Lance Stroll rounded up the top ten 1.376s off the benchmark time.

McLaren remained outside the top ten with Lando Norris 11th and Daniel Ricciardo 15th, while the Alpine pair were left languishing in 16th with Fernando Alonso and 18th for Esteban Ocon. 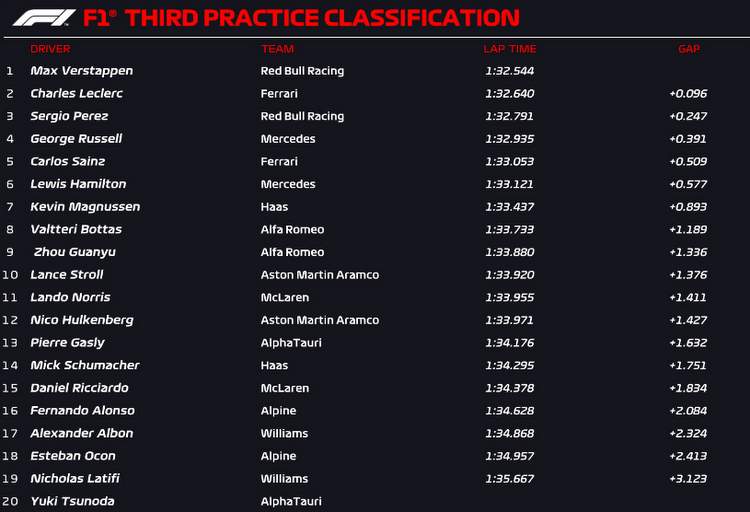