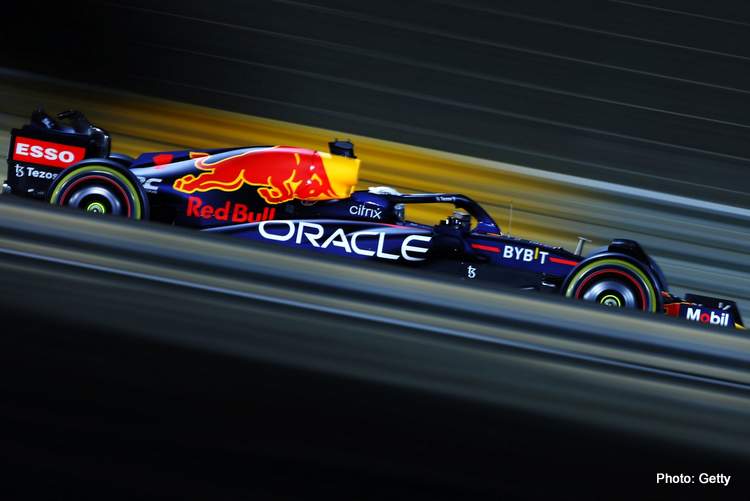 Friday’s running of the 2022 Formula 1 Bahrain Grand Prix weekend was concluded, with FP2 in the afternoon, as Max Verstappen topped the timesheets with Leclerc chasing.

FP2 was always going to deliver some more insight into where each team stands, as they would be running the soft tyres, possibly revealing some of their cars’ ultimate pace, especially since the afternoon run was in more representative conditions identical to those in qualifying and the race.

Unlike FP2, nothing could be read into the times and running from FP1, as the teams still seemed to be getting to grips with their 2022 machinery.

Red Bull did not feature anywhere near the top in the morning session, but the Ferrari pair looked good yet again taking second and third, the Scuderia’s performance impressing Martin Brundle yet again.

The former F1 driver saying to Sky Sports F1: “At the front we didn’t see true runs in soft and medium but Ferrari, as ever, every session, Barcelona, Bahrain test and now today, right towards the front of the times.”

Karun Chandhok agreed with his colleague saying: “I think Ferrari will be pleased, in every condition we’ve seen the Ferrari has been competitive. Second and third, they’ll be pleased with that.”

Also making a return this year is the onboard helmet, which was fixed to Zhou Guanyu’s helmet in FP1, then with Lando Norris in FP2.

Valtteri Bottas had the issue with his misfiring power unit sorted between the two sessions and was back to normal running in the afternoon, without needing to change his troublesome unit.

So with all teams running the softest of compounds, the new cars were put to the test, and with the times that have been recorded at such an early point in the season, the 2022 F1 machinery impressed compared to their predecessors, with more performance set to be unleashed from them in the coming months.

The standings at the end of FP2

Max Verstappen took the top spot in FP2, the reigning Champion clearly leaving some more pace in his armory, to be unleashed on Saturday’s qualifying.

Charles Leclerc in the Ferrari F1-75 was second fastest 0.087s off the Dutchman’s pace, the Monegasque having a moment at turn with Yuki Tsunoda, the incident to be investigated after the session. Not a smart move by both, especially during practice.

Carlos Sainz was third fastest in the sister Ferrari the Spaniard 0.497s off the pace of his teammate, and was followed by George Russell, the faster of the Mercedes pair, in fourth 0.593s off the top time.

Fernando Alonso was in the top five in FP2, the veteran almost 1 second off the marker laid by Verstappen.

After a disappointing morning session, Valtteri Bottas had a decent session in the Alfa Romeo going sixth fastest and 1.015s of the ultimate pace, and ahead of Sergio Perez who was seventh and over a second slower than his teammate.

Eight went to Mick Schumacher in the Haas, the German 1.149s slower than the top time, but nevertheless impressive for a team who was languishing at the bottom of the grid last year.

Lewis Hamilton could only muster ninth on the afternoon, the seven-time World Champion complaining about “porpoising” at one point of the session, then about brake problems on another. Hamilton was around six tenths slower than Russell in the other W13.

On board with Hamilton and just look at how much his head is moving in the car 😬 pic.twitter.com/TDyQoju1EG

Kevin Magnussen made it two Haas cars in the top ten, as the Dane took 10th, less than one tenth slower than his teammate.

McLaren failed to make it into the top ten for the second session in a row, with Lando Norris 11th, and Daniel Ricciardo 18th.

After topping the morning session, Pierre Gasly was only good for 13th, with Tsunoda 14th, and 0.168s slower than the Frenchman.

The Aston Martin pair were 16th and 17th with Lance Stroll only one tenth faster than Nico Hulkenberg, filling in for Sebastian Vettel in the last minute after the four time F1 Champion contacted Covid-19. Not bad for the Hulk. 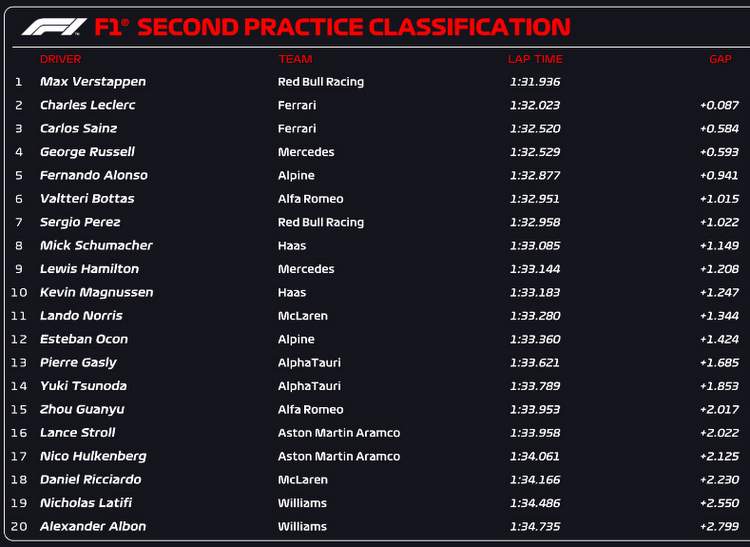