Bahrain GP Qualifying: Leclerc nips it from Verstappen and Sainz 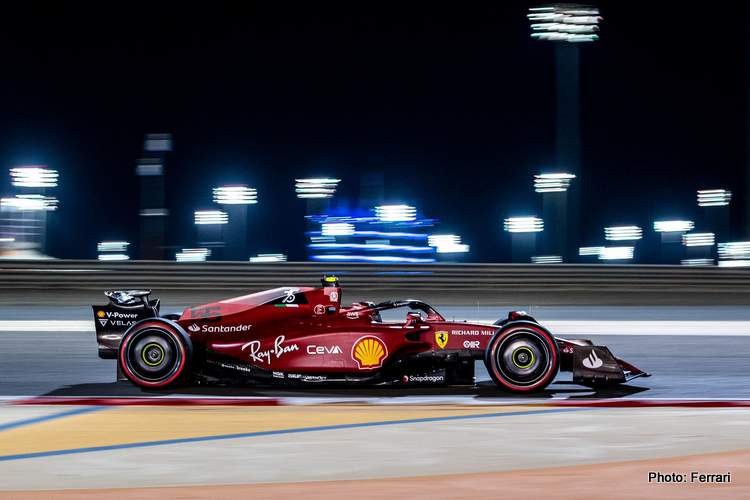 Qualifying for the 2022 Formula 1 Bahrain Grand Prix was mega, as Charles Leclerc reigned supreme to take the first pole of the season.

That was it, all the masks were off. No more talk of “ground effect”, “porpoising”, or Mercedes’ “zero-pods”, as there was no more place for anyone to say anything, except for the stopwatch that had the final say on Saturday afternoon in Bahrain.

And what the stopwatch did indeed say is that Charles Leclerc was the fastest driver to go around the Bahrain International Circuit on Saturday afternoon.

Finally we got the see the beautiful new generation of F1 cars run flat out for the first time, with the 20 best drivers in the world wrestling them around the Sakhir circuit of Bahrain, and that made for a glorious affair.

With everyone tipping Max Verstappen to take the first pole of the season, but it was Charles Leclerc who took the honors from the Dutchman with a pole time of 1:30.558.

Speaking after Q3, and elated Leclerc said: “It feels good! We were quite hopeful that this would be an opportunity to be back in the front. We’re starting from pole, so I’m very happy!”

The reigning World Champion had to settle for second when the flag was waves and found himself 0.123s off the Monegasque’s time.

Verstappen had this to say after losing out to Leclerc: “I think we have a good car and a good race car. It was a good start to the new era. It was a really close battle with Carlos and Charles.”

Carlos Sainz seemed at some point good for pole, but was good for third in the end of the first qualifying shootout of 2022 0.129s off pole, and only 0.006s off Verstappen’s time.

The Spaniard commented: “I’ve been more than half a second behind all weekend, so to be even fighting for pole position today was good news for me.”

Sergio Perez took fourth with a 1:30.921 making sure the front rows will not feature a Silver Arrow on Sunday’s starting grid.

With Mercedes saying that their deficit to Red Bull and Ferrari was in the region of eight tenths, Lewis Hamilton outqualified his teammate George Russell to fifth and was 0.680s off the pace, a slight improvement there fir the World Champions.

Valtteri Bottas took a superb sixth on his first race weekend with Alfa Romeo, behind his former teammate and over three tenths slower than the Briton.

Another excellent performance on Saturday afternoon in Bahrain was credited to Kevin Magnussen, called in the last minute to replace Nikita Mazepin, the Dane proved he has still got what it takes and made himself at home immediately, beating his teammate into seventh 1.250s off the top time.

Fernando Alonso drove his Alpine to Q3, the Spaniard taking eighth position but 1.637s off the pole time set by Leclerc, but a decent effort from the Spaniard.

George Russell could not do better than ninth on his Mercedes debut, despite being ahead of his teammate at some point in Q1 and Q2, but he fell prey to this few tenths Hamilton unleashes in Q3, and his time was 0.978s off his pace.

Pierre Gasly continued his habit of mixing it up with the big boys, making it into Q3 in a great effort, but could not make it higher than tenth. The Frenchman was 1.780s off the pace.

The second “batch of five” to have an early end to their qualifying session was lead by Alpine’s Esteban Ocon who took 11th with a time of 1:31.782.

Next was Mick Schumacher in the Haas who was 12th, as his teammate Magnussen went through in Q3, the German clocking a 1:31.998.

Lando Norris might have made it out of Q1 but couldn’t make it into the final part of qualifying and had to settle for 13th and was a mere 0.01s off Schumacher.

Alex Albon did well to outqualify his teammate on his Williams debut, but not well enough to make it to Q3, nevertheless a decent performance by the British-born Thai to take 14th.

Zhou Guanyu took 15th, not bad for the rookie who had his best lap time deleted for violating track limits. 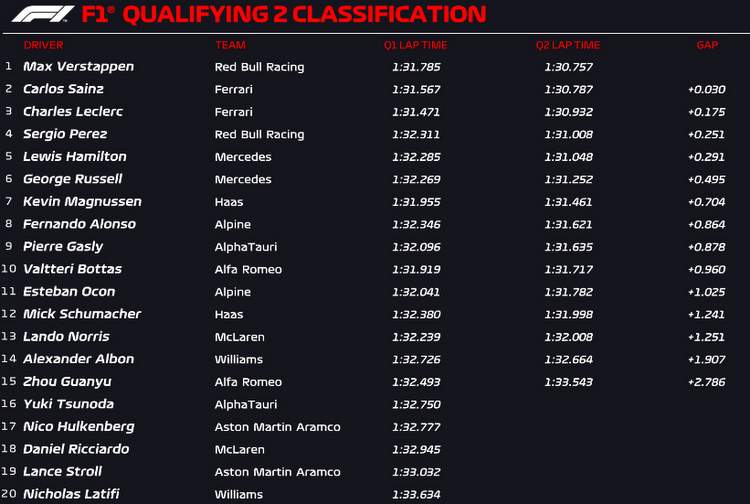 First of the drivers off to an early shower was AlphaTauri’s Yuki Tsunoda who was only good for 16th with a 1:32.750, and was followed by Niko Hulkenberg in the other AMR22.

The German 0.027s off the Japanese driver and beating his better prepared teammate Lance Stroll who was 19th. Credit to the Hulk there. 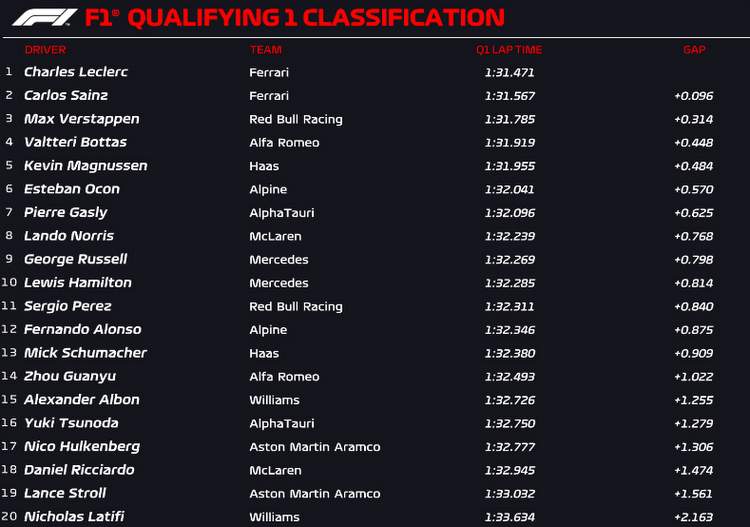