Hamilton: Everyone can figure out we are not quickest 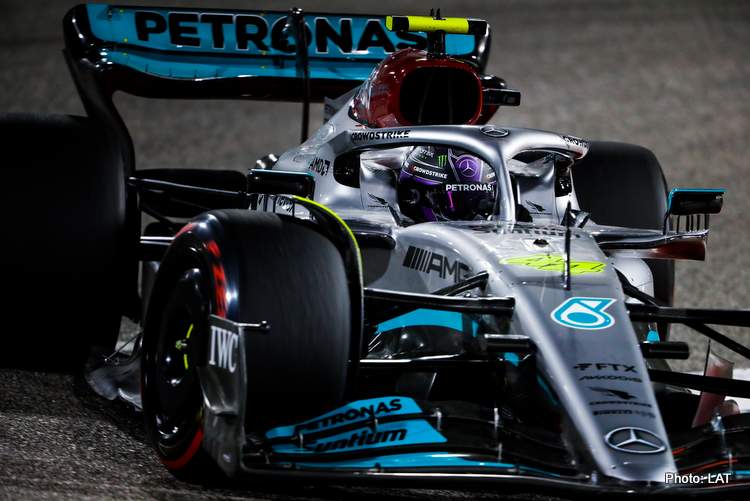 Lewis Hamilton is still pushing the narrative that Mercedes are struggling with Formula 1 testing concluded in Bahrain, claiming it’s a known fact they are not the quickest.

“We have some hurdles to overcome and obviously next week we’ll get a much better showing of our pace,” the seven-time F1 World Champion said in the team’s press release.

“I’m sure everyone can figure out that we are not the quickest at the moment. There is potential within our car to get us there but we’ve just got to learn to be able to extract it and fix some of the problems, which is what we’re working flat-out on.”

Provided the Mercedes W13 didn’t look good on track in Bahrain, with the lap times the drivers extracted from it backing up Hamilton’s claims, but it remains a fact that Mercedes always downplay their chances in pre-season, before they show up at the first race and blow everyone away.

Which means, everything coming out of the Mercedes camp might as well be taken with a pinch of salt, since even if they are struggling with the W13, they are more the capable to dial it into a race winner. Remember 2021?

“I think everyone struggled out on this bumpy track and we come out of testing knowing that we still have a lot of work to do,” Hamilton added. “There’s a confidence within the team that we can always work through whatever problem we’re facing and that’s what we’ll do. I have all the faith in the men and women back at the factories to get on top of our issues.

“One thing is for certain, we’ll be bringing our fighting spirit to the first race next weekend,” Hamilton concluded.

George Russell’s feedback from the last day of testing in Bahrain did not differ a lot from his teammate’s, the younger Briton saying in his team report: “At the moment, we seem a step behind our rivals and we have a lot of work to do between now and next week to better understand the car.

“There’s a lot of potential in the W13 and I believe our guys are going to get to the bottom of it, we just need to find a way to unlock our performance.

“It’s been a productive few days and very intriguing at the same time, with so much to learn about these 2022 cars and tyres,” he added.

“We got through our programme with few reliability issues so great from that perspective. We were trying to get every last bit of performance out of the car and push the limits and when you’re doing that, you’re bouncing around a lot! It’s not the most comfortable but I don’t really care about comfort as long as the performance is there.

“The bouncing is affecting our ability to put the car in the right window and the team are working incredibly hard to find solutions for this.

Mercedes will be back in Bahrain in less than a week for the 2022 Bahrain Grand Prix, and the F1 world will finally find out how fast or slow their radical W13 is.

“This is a long game and I do believe our performance is there, we’ve just got to find it,” Russell concluded.

This time next week we’ll know who’s on pole for the Bahrain GP! 🤩 pic.twitter.com/G2UgAsOqpL