Hamilton: I don’t think we’ll be competing for wins 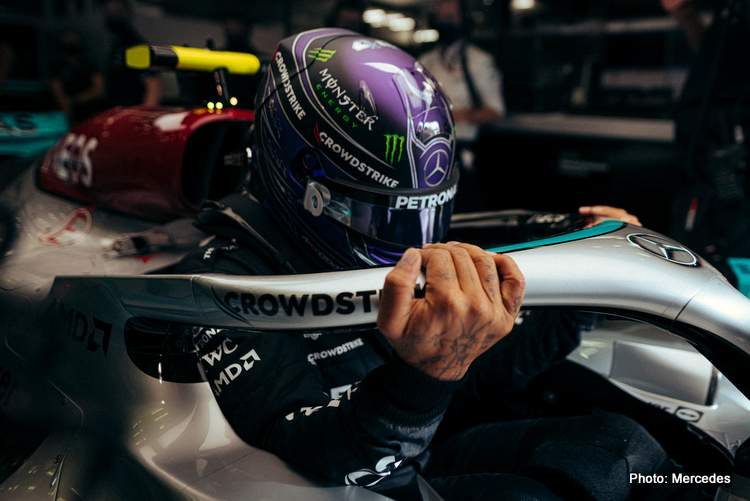 Lewis Hamilton painted a grim picture about his team’s 2022 Formula 1 chances, claiming they won’t be competing for wins at the moment.

The seven-time World Champion is adamant that his team – kings of the sandbagging – are not the best on the grid now, not even with the radical “zero-side pods” W13 that debuted in Bahrain’s pre-season test.

Instead Hamilton is running with the same narrative everyone is pushing, and that is Ferrari is best right now, and said to the media in Bahrain: “At the moment we’re not – I’m sure everyone can kind of figure that out – we’re not the quickest at the moment, I think Ferrari look to be the quickest and perhaps Red Bull and then maybe us or McLaren – but we’re currently not at the top.”

Mercedes not in a happy place

Watching the testing, it has to be mentioned that that W13 does not look to be in a happy place yet, and some images from the Mercedes garage do not show a happy team, so is that the case, or is that a poker face the team are putting on?

“At the moment I don’t think we’ll be competing for wins, but there is potential within our car to get us there,” Hamilton admitted in the press conference in Bahrain on Saturday.

“We’ve just got to learn to be able to extract it and fix some of the problems, which is what we’re working on,” he went on. “We have some hurdles to overcome and obviously next week we’ll get a much better showing of our pace, but I think people will be surprised, maybe, because people keep talking about whether we’re talking ourselves down or not, but it’s a bit different this year.”

Comparing this year to last year, when also Mercedes seemed to be in trouble, Hamilton revealed: “It feels a lot different. It’s not as good. It’s not going to look as good as it did last year.

“I think we have far bigger challenges this time and they’re not one-week turnarounds, I think they’ll take a little bit longer, but from what I’m told, we have a significant amount of pace to find,” the Briton insisted.

Red Bull’s Christian Horner is not buying the Mercedes-is-in-trouble narrative and insists the World Champions are sandbagging,  saying:”A year ago we were pretty happy. Then came Mercedes, they were very strong and won the first race.

“That shows: testing is testing. And there are only points in a week,” the Red Bull boss insisted.

Horner however agrees with Hamilton’s assessment of Ferrari: “There is only one constant: every time the Ferrari is on the track, the car looks competitive. When the McLaren is driving, it is the same.

He reiterated that he believes Mercedes “hasn’t shown everything yet” despite the W13 being “a bit difficult to drive”, and even believes Williams is capable of a surprise, which looks “quite competitive” especially over the distance.

In all cases, the Bahrain Grand Prix season opener is just around the corner and very soon we will find out who is hot and who is not.