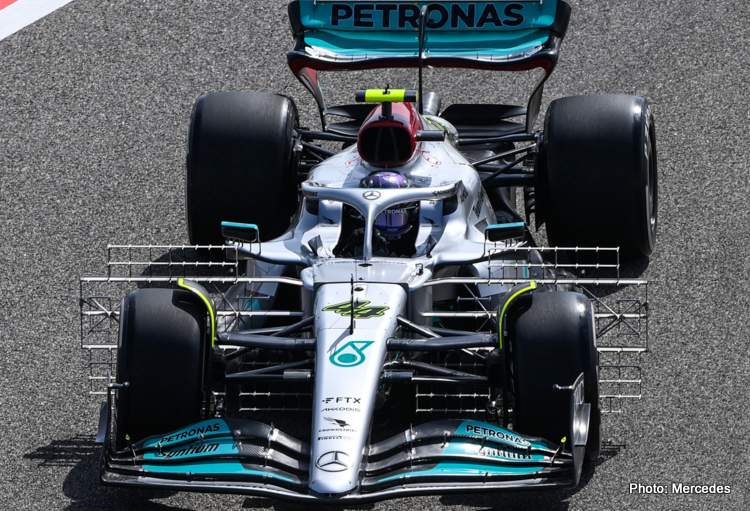 The radical sidepod-less Mercedes W13 unleashed today on the first day of Bahrain F1 Testing has set tongues wagging with Red Bull questioning its legality and then denying it in a statement.

Mercedes have thrown a cat among the pigeons with a concept that has stunned the F1 world, so much so that when respected Auto Moto und Sport sought reaction from Red Bull team boss Christian Horner, he appeared unhappy with what he saw this morning.

Referring to the wing-like extensions that secure the mirrors to the main body of the car, Horner said: “Those are not mirror-mounts, but two wings. They also have vertical baffles built on top. They have nothing to do with the mirror mount.

“From our point of view, Mercedes went a step too far. That does not correspond to the spirit of the regulations. For us, these wings are illegal,” added Horner who was seen watching TV screens with Max Verstappen.

Watching and discussing as Lewis Hamilton circulated in the new car, which is clearly the hot talking point in the paddock and sure to set the internet alight.

Red Bull: Any quotes being attributed to Christian Horner this morning are incorrect

However not long after the AMuS report, Red Bull put it on record that they were not protesting the W13 at this stage with Sky quoting a statement released by the team: “Christian Horner has not given any interviews regarding Mercedes’ car. Any quotes being attributed to him this morning are incorrect.”

Not long thereafter, respected AMuS reporter Michael Schmidt insisted for the record that he indeed did get the quotes from Horner.

To which the Red Bull boss responded on Sky F1: “I was slightly surprised to be reading comments I’m supposed to have been making, but there we go

“I haven’t paid a great deal of attention to [the Mercedes]. It’s obviously a fairly different concept, but that’s for the designer guys and aerodynamicists to get into Let the guys digest it and understand it,” Horner added.

Meanwhile, Hamilton was on duty in the morning driving the vastly different version of their 2022 car than the one that rolled out in Barcelona last month.

The Barcelona version was an early phase of the W13’s development, awaiting these new bodywork parts which are now in the public domain and sure to be studied intensely by rival teams.

Testing in Bahrain continues tomorrow and throughout Saturday, ahead of the season-opening Grand Prix at the venue on 20 March.