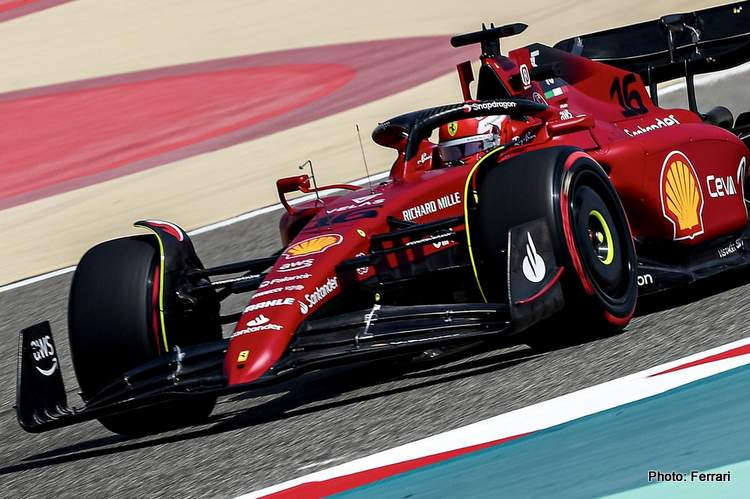 Formula 1 was back in action for the final three-day Bahrain F1 Test for the all-new 2022 cars, with the Mercedes W13 and its ultra-slim side pods stealing the show but Ferrari topping the timesheets.

The F1 teams were back at it in Bahrain for the three-day pre-season testing, the official one this time, after being back at their factories analyzing the data from Barcelona, and working on the upgrade packages for their cars that will be run in Bahrain, keeping in mind that the 2022 season opener will be at the same track, the 2022 Bahrain Grand Prix.

The team that seems to have achieved a lot over the break since Barcelona was Mercedes who brought an unrecognizable W13 to Bahrain, the upgraded car having such small side pods that you cannot blame the previous reports that said it will have none.

Mercedes fire a warning shot, and so does Horner

It is such a powerful statement from the team who many thought would have been distracted by the intense Title fight of last year that went down to the wire. But Mercedes have proven again that they are still the benchmark in terms of innovation.

Excellent comparison of new and old version of the @MercedesAMGF1 W13 from @AlbertFabrega: pic.twitter.com/1T29ug4311

Now it remains to be seen of the bold design of the W13 will work, but credit has to be given to the World Champions for pushing the envelope yet again, but will the competition be happy about that design direction?

Seems not, as Red Bull Christian Horner was quoted by Auto Motor und Sport saying: “The new Mercedes violates the spirit of the regulations. For us there are some parts that are not legal.”

But a Red Bull statement said: “Christian Horner has not given any interviews regarding Mercedes’ car. Any quotes being attributed to him this morning are incorrect.”

Interesting to see how that develops, but speaking of Red Bull, they seem to have come to Bahrain with the RB18 not sporting any major changes. But Adrian Newey was telling Auto Motor und Sport that updates for the RB18 will be arriving on Day 2 or 3 of the test.

In all cases, with Newey on board, one can confidently say that the energy drinks outfit will be a force to be reckoned with, as the F1 world awaits in the likes of Ferrari and McLaren to see if they have found some silver bullet in the new regulations that will out them in contention this year.

Another major story in the paddock was Haas re-hiring Kevin Magnussen to the team after breaking all ties with Nikita Mazepin and his Uralkali sponsors, with Haas reverting to a black, red and white livery, with the Haas Automation logo featuring on the car.

Pietro Fittipaldi was around for testing, as well as Kevin Magnussen, the Dane preparing for his debut at the Bahrain season opener, which we must say is a challenge for the 29-year-old as he has no experience whatsoever with the VF22 that will built under the new regulations.

On day one of testing, Mercedes had Lewis Hamilton was at the wheel of the W13 in the morning session, with George Russell set to take over for the afternoon, while Red Bull opted to field Sergio Perez all day in the RB18 with Max Verstappen taking over for the next day.

Charles Leclerc kicked off Ferrari’s testing efforts in Bahrain with Carlos Sainz taking over for the afternoon, as Lando Norris replaced an unwell Daniel Ricciardo at McLaren for the whole opening day of testing in Bahrain.

McLaren Racing will change its driver line-up for day one of the test. Daniel Ricciardo is feeling unwell therefore Lando Norris will be in the car for the opening day here at the Bahrain International Circuit.

Alpine also split the roles on day one with Esteban Ocon driving first, as Fernando Alonso will jump in the A522 in the afternoon, as opposed to AlphaTauri who has a one-driver-a-day approach, Pierre Gasly starting first in the AT03.

Sebastian Vettel began for Aston Martin on Thursday morning, with Lance Stroll waiting on the sidelines to get his turn in the AMR22 in the afternoon session, while Alex Albon was on driving duty for Williams for the full Thursday.

Alfa Romeo will be hoping for a better test in Bahrain, having revealed their 2022 car in full after Barcelona, with rookie Guanyu Zhou being the first to drive striking C42 first, Valtteri Bottas taking over in the afternoon.

Pietro Fittipaldi was scheduled to do the running for the full day with Haas, but the issue the American team faced with their cargo meant their running was delayed, as Haas confirmed that they will be running in the afternoon, as the morning session was spent building the VF22.

A reminder that, due to freight delays out of our control, we will not be running in the first session of today’s Bahrain Test.

Good progress is being made on the car and we’re still on track to have @PiFitti on track for the second session, at 3pm.#HaasF1 pic.twitter.com/GQyWUjx2xT

At the end of the morning session of Day 1 it was Charles Leclerc who went fastest for Ferrari followed by Alex Albon in the Williams in second.

Third fastest was Sebastian Vettel in the Aston Martin, the German sporting a special helmet design against the war in Ukraine, his AMR22 featuring an updated floor.

Fourth went to Red Bull’s Sergio Perez, with Lewis Hamilton in fifth for Mercedes, as Esteban Ocon went sixth fastest in the Alpine.

Seventh and eighth were Guanyu Zhou in Alfa Romeo and Lando Norris in McLaren respectively, with McLaren saying they were investigating an issue on the MCL36 that limited the team’s running.

With Fittipaldi not running, the slowest of the runners was Pierre Gasly in ninth for AlphaTauri.

First morning in the F1-75 complete! Here’s where we’ve done in the first part of #F1Testing 👇 #essereFerrari 🔴 pic.twitter.com/9HmzediVBV

How many laps did they run? 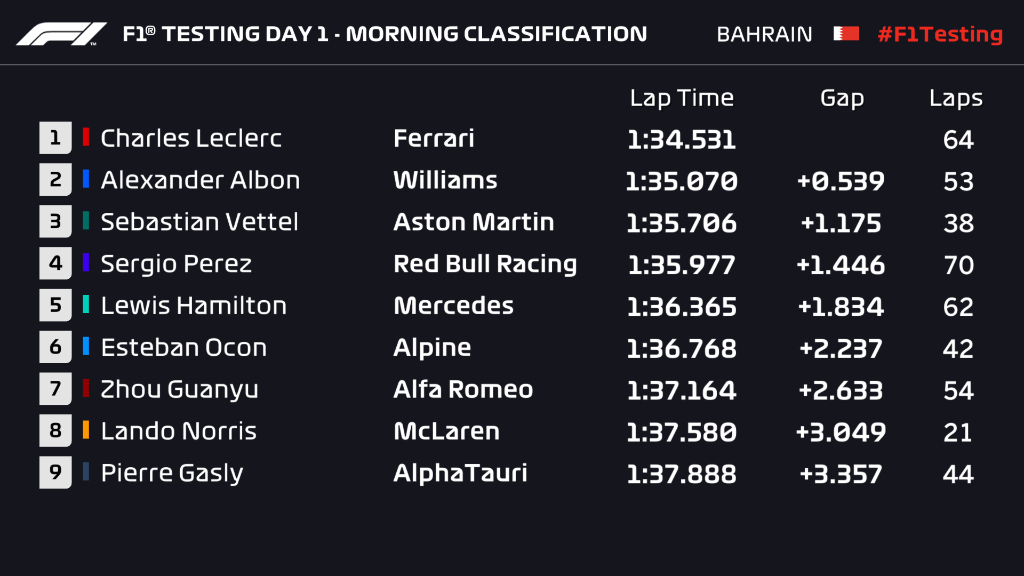