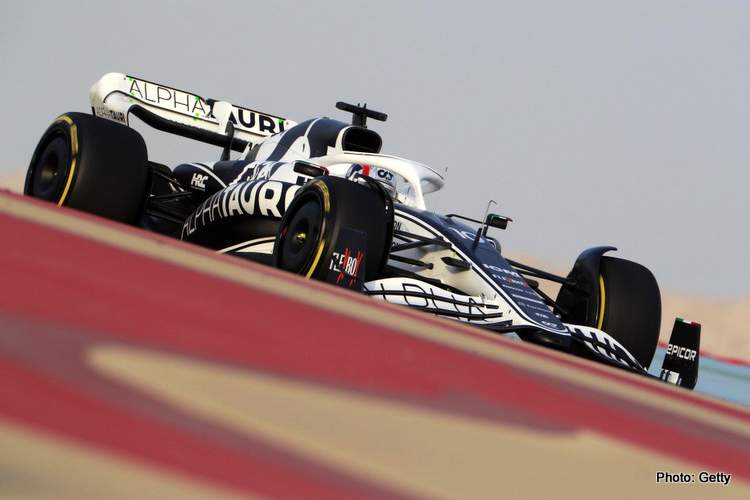 Bahrain’s Formula 1 action resumed, after a one-hour-break, as the F1 teams took to the Sakhir track for the afternoon testing run to try and hone in their new machines.

Pierre Gasly set the fastest time of the day in the afternoon session, ahead of Ferrari’s Carlos Sainz, the Spaniard over four tenths slower in second, with his teammate Charles Leclerc relegated to third overall after finishing the morning session fastest.

Aston Martin’s Lance Stroll was fourth fastest ahead of Alex Albon in fifth, the Williams driver stopping at 104 laps after facing steering issues. The Canadian brought out the Red Flag, 45 minutes into the afternoon session, as the aero rake along with some car body parts snapped off the AMR22 and needed to be retrieved. Stoppage lasted under ten minutes.

McLaren’s Lando Norris was sixth fastest the Briton having a troublesome day not running more than 50 laps, and was followed by Valtteri Bottas in  the Alfa Romeo in seventh.

Sebastian Vettel was eighth overall at the end of the day after going third fastest in the morning session, with George Russell in ninth place.

Sergio Perez, who spun his RB18 with 10 minutes of running remaining, bringing up the Red Flag and bringing the session to a premature end rounded up the top 10.

A rundown on the morning session

The morning session was all about Mercedes and their “zero-side-pod” W13, one the names now being used for the ultra-slim side pods they introduced, that are surely set to make waves of discussions and controversy around the F1 paddock.

Toto Wolff, the Mercedes team boss does not seem to be worried about the legality of his team’s car, and said to the media in Bahrain: “The process is very clear, when you go in a specific development direction with your team, having the FIA as part of scrutinising it, you’re exchanging CAD data and making them part of the process.”

Ferrari had a strong morning running reliable and fast over 64 laps, with Charles Leclerc topping the timing screens, while Mercedes ran 2 laps less than the Scuderia keeping their powder dry, and not going for any headline-grabbing times, as Lewis Hamilton finished the test fifth.

Haas were back in action in the afternoon session with Pietro Fittipaldi at the wheel of the hastily assembled VF22, the team delayed due to their cargo arriving late in Bahrain. The team ran their revised livery that had all hints referring to their previous sponsor Uralkali being removed, as the team announced that Kevin Magnussen will be re-joining in place of Nikita Mazepin.

What is interesting about the running in the afternoon testing sessions, is that the conditions will be identical to those in qualifying and racing at the 2022 season opener, the Bahrain Grand Prix on March 20.

Not all teams changed their drivers for the afternoon session, but Mercedes had George Russell on duty after Hamilton’s morning run, with Carlos Sainz taking over from Leclerc in the Ferrari.

Lance Stroll took over the AMR22 from Sebastian Vettel, with Fernando Alonso driving for Alpine instead of Esteban Ocon, while Valtteri Bottas was driving the Alfa Romeo C42, taking over from teammate Guanu Zhou.

See who will be in the cars for this afternoon’s testing session in Bahrain 👇 pic.twitter.com/n7TufzMscc

Lando Norris who remained on duty at McLaren was looking to rebound from the troubled morning session he endured, suffering what was reported as “brake problems” on his MCL36, hoping to run more that mere 21 laps he did in the opening session, where he was drafted in the last minute to replace an unwell Daniel Ricciardo.

Ferrari and Mercedes took their time to hit the track with major setup work being done on the F1-75 and W13 respectively, the former reportedly replacing the floor on the car with Carlos Sainz taking to the track with a little under one hour of the session gone by. Mercedes was out on track after one hour of running.

Red Bull on the other hand were out on track earlier, to start adding up to their impressive 70 laps Sergio Perez ran in the morning session, where he finished fourth fastest.

Russell worried about Ferrari, Verstappen not worried at all

Max Verstappen and George Russell spoke to the media at lunchtime, the 2021 F1 World Champion unperturbed by the radical W13 Mercedes brought to Bahrain.

“We can only focus on ourselves,” Verstappen said. “I said this so many times last year and that’s what we’ve got to do again this year. Even if the car looks different, there are so many unknown things still that we need to learn about. So I’m not worried at all.”

George Russell on the other hand spoke of his radical ride: “It looks interesting… but it’s not about how it looks it’s about how fast it goes. It obviously caught a few people’s eye this morning. But we need to see the times.”

Russell added: “I don’t think it’s advantage anyone at the moment. As Max said earlier they have a few things coming, and at the moment Ferrari look globally the strongest in every low fuel run, consecutive laps, they look very, very solid. And if you look at their sidepods, they’re quite drastically different to what we have at Mercedes, and what Max has at Red Bull. Time will tell next weekend, it truly is unknown.”

Haas allowed to test further in the evening

Haas, who missed the opening session in Bahrain in Thursday due to delated cargo, have requested to be allowed to test in Sunday morning instead, after the conclusion of the Bahrain test on Saturday, citing Force Majeure.

However, their request was rejected on the basis of limiting the test to three days.

“We were denied the testing on Sunday,” Haas team boss Guenther Steiner told the media in Bahrain. “Nine minutes before we went out.

“We can make up four hours of testing but we need to make it up at the end of the day,” he added. “But we can’t run on Sunday.

“We can run an hour later, four hours – in total, over the three days, four hours in the evening,” Steiner revealed.

The first day of #F1Testing in Bahrain is over 🇧🇭🏁

His fastest lap ⏱️ 1:37.422 places him P15, but he only ran on the hard & prototype tires today.#HaasF1 pic.twitter.com/KaKcNbhiZG

Impressive as it may be, Mercedes’ W13 does not seem to be a plug and play car, according to Martin Brundle who was watching trackside in Bahrain and speaking to Sky Sports F1 on the subject, the former driver admitting he expected the World Champions to have an immediate impact with their revolutionary design.

“We don’t know what power they’re running, we can assume they’re running a lot of fuel, but it’s not a plug and play car that looks like it’s right at the front of the timing sheets come what may, like we saw in 2014 and 2015. They’ve been struggling a little bit to slow it down, so work to do there.

“I thought with all that new body work on it, from what I was hearing, it might have turned up and spoiled a lot of people’s days.” 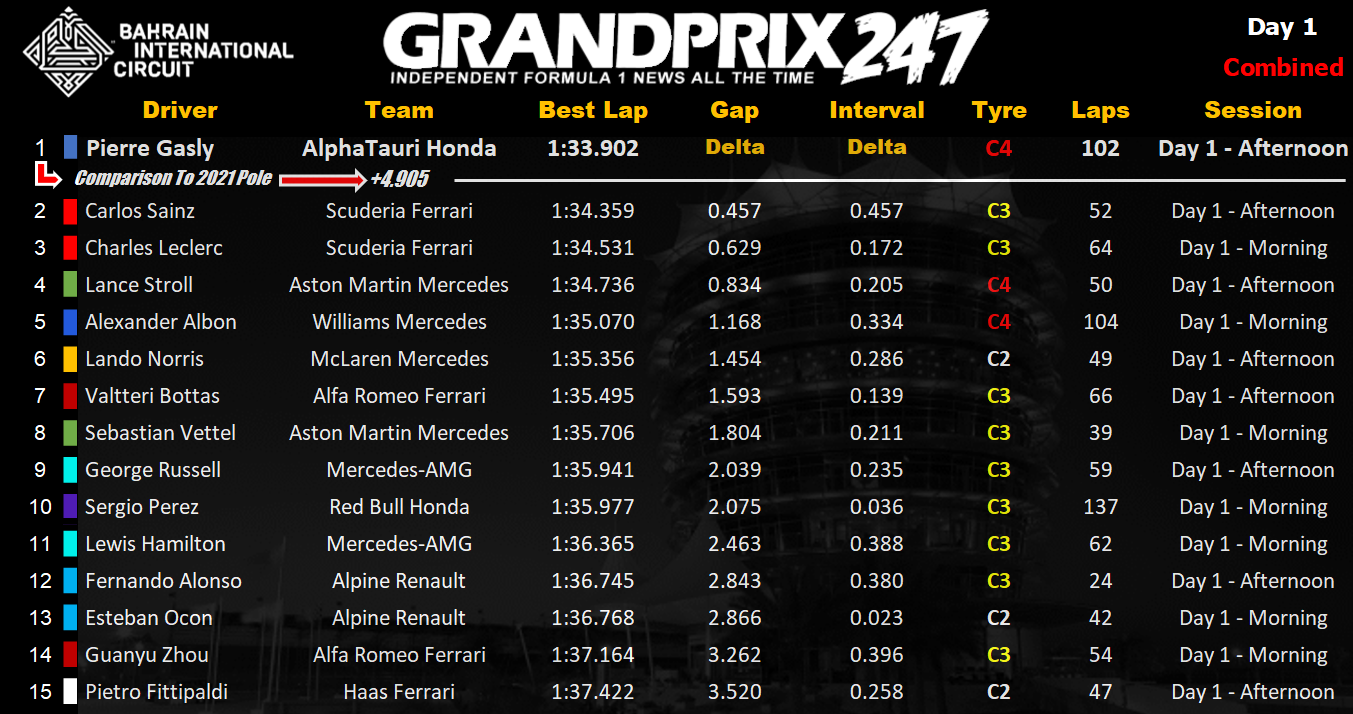