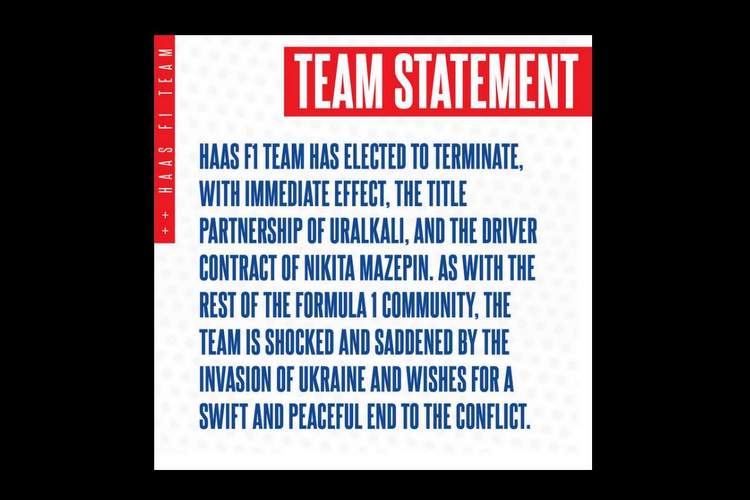 Haas F1 team have confirmed today that Nikita Mazepin will not race in Formula 1 World Championship this season, terminating the contract between the team and the driver’s sponsor Uralkali.

The Gene Haas-owned American team, led by Guenther Steiner said in a statement on Twitter: “Haas F1 Team has elected to terminate, with immediate effect, the title partnership of Uralkali, and the driver contract of Nikita Mazepin.

“As with the rest of the Formula 1 community, the team is shocked and saddened by the invasion of Ukraine and wishes for a swift and peaceful end to the conflict.”

The departure of Mazepin means the team has a seat with several candidates in mind, top of the list – acfcording to Steiner’s earlier remarks – appears to be unproven Pietro Fittipaldi, while suggestions of a call to Kevin Magnussen or Romain Grosjean may be on the cards are a long shot as both drivers are committed to their programmes in the USA.

Mick Schumacher will welcome a new teammate, his toxic partnership with Mazepin a thing of the past

Also available is veteran Nico Hulkenberg as an outside chance. Another option would be to give Ferrari-backed Antonio Giovinazzi a crack, while Oscar Piastri and his minders are keen to get their hotshot into the seat.

Whatever the case, Mick Schumacher will have a new teammate, which is a blessing in disguise because, with Mazepin in the sister car, the young German (son of legend Michael Schumacher) had no barometer resulting in a toxic partnership between the two youngsters.

It can’t get worse for Mick, in fact, it might just get a whole lot better for him if Haas play their cards well in filling the second seat.

As for Mazepin – his forgettable F1 career could well be a thing of the past with the ban on Russian sports, sportsmen and sportswomen looking to be a long term thing – the son of billionaire oligarch Dmitry Mazepin may have to join the army (like hundreds of thousands of lads his age) as Ukraine are not crumbling to the Russian aggression as the invaders expected.