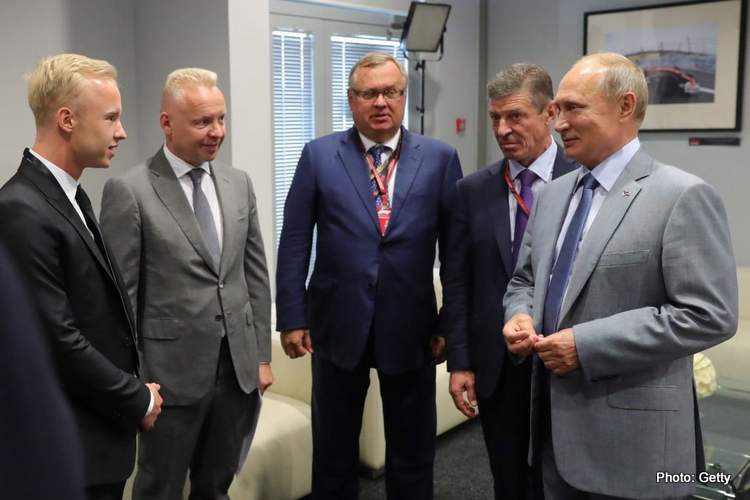 The World Motor Sport Council meeting on Tuesday, chaired by FIA President Mohammed Ben Sulayem, concluded with the decision of preventing Russian drivers and teams from competing in FIA sanctioned events while running the Russian flag.

Ever since the Russia commenced its military action against Ukraine, and everyone in the world was talking about the unfortunate chain of events that has been put in motion, the repercussions of which will surely spread outside the geography of the two countries.

Formula 1, was bound to be affected by the developments, especially because there is a Russian race on the F1 calendar, and a Russian driver – supported by a Russian sponsor – competing on the grid.

The first signs of things changing was the cancellation of the 2022 Russian Grand Prix, followed by Haas removing the Uralkali Branding from their VF22 F1 car, with the fate of their Russian driver Nikita Mazepin hanging in the balance.

Uralkali is a potash fertilizer producer and exporter, owned by Dmitry Mazepin, Nikita’s father, with the sponsorship money it brings to the table securing Mazepin junior’s race seat at Haas F1 Team.

The FIA’s latest decisions on the matter provides Mazepin the loophole required to abide by the conditions laid down after a special World Motorsport Council meeting chaired by FIA President Mohammed Ben Sulayem, which are:

This means that Nikita Mazepin may race without flying the Russian flag, otherwise, he cannot set foot in an F1 car, or even be around an F1 paddock, is that fair?

Mark Kay: Why do the Russian people need to be held accountable for Putin’s action?

“Quite simply, I believe that the Russia-Ukraine invasion is Vladimir Putin’s personal war, and not that of the Russian people.

“It’s is a country of 145-million people, and the reality appears that the vast majority have neither had any input in the decision-making process to invade Ukraine nor support it. Under those circumstances, I find it difficult to rationalise why the Russian people need to be held accountable for Putin’s action on a personal level.

“In the context of Nikita Mazepin, his role in the Haas F1 team, and his father Dmitry’s business ties in supporting the team, I agree with the removal of the Uralkali branding on the cars, but I feel it would be unjustified if Nikita was precluded from competing in this year’s Championship because of his Russian nationality.

“As Uralkali’s revenue is derived from the Russian economy and Putin’s policies, as well as the well known and obvious ties between Dmitry Mazepin and Putin, precluding the commercial and personal interests of Uralkali and Dmitry from involvement in F1 and Haas for now mitigates moral compromise.

“However, for Nikita on a personal level, not only has he already proven that he is qualified and experienced enough to compete in F1, but he has also made no personal statement in support of Putin’s actions, and to me it would be unfair for him to be held accountable purely based on the country in which he was born, and quite frankly had no say in, anyway.

“Nevertheless, there is one point I find curious in the whole Mazepin/Haas/Ukraine issue. Haas F1 Team is a privately owned team that carries the family name of the owner.

“What is Gene Haas’s position on the issue? To me, the complete vacuum of any statement from him is complacent at best, and weak at worst.”

Sean Stevens: Punishing an individual over your country leader’s actions achieves nothing

“I’m sure Nikita’s father will continue to pump the money in… if he can. Making the transfers may be difficult going forward. Lack of visibility on the car will not be the problem.

“Gene Haas is pretty public about not wanting to put money in, so someone with a wedge of cash could jump in and supplant Mazepin’s seat.

“An easy, albeit weak excuse to drop him. I think there is better PR for Haas by standing tall morally and supporting the guy. He (Gene) didn’t mind taking the cash when Putin was killing civilians in Syria.

“Punishing an individual over your country leader’s actions achieves nothing other than victimizing an innocent party – especially if the individual has not publicly supported it.”

Jad Mallak: Why did Mazepin senior’s money so suddenly become ‘dirty money’ to F1 and the FIA?

“In my opinion, world politics should not be allowed to infiltrate into sports, but unfortunately that is not the case, and I find myself reluctantly having to write about the Russian/Ukrainian events and how they have been affecting Formula 1.

“First of all, whatever the hell is going on between Russia and Ukraine is the typical embodiment of global powers playing their endless games of power struggles and I, the mere mortal, can have no impact on what is happening or will happen in that regards, so I try to focus on what I can somehow control, that is doing my job well and taking care of my family, while feeling sorry for the pain of the innocent people affected by hostilities worldwide and not only in Ukraine.

“Having said that, being an F1 editor, and most importantly an avid F1 fan, I have to state my feelings about the situation that Nikita Mazepin finds himself in, in the wake of the latest FIA decisions concerning the Russian/Ukrainian events.

“Let me start by saying that I am no Mazepin fan whatsoever, and I loathe the fact that he can pay money to drive an F1 car, while many other drivers with loads of talent – Oscar Piastri pops up as a fresh example – have to be sidelined because there aren’t enough F1 seats on offer.

“I do not believe he has what it takes to make it in top flight, his results against a ‘not-yet-up-to-speed’ Mick Schumacher more than proof of that. But does Nikita deserve to be pushed out of F1 because of this? Definitely no.

“Regardless of the Russian/Ukrainian war, Dmitry Mazepin has always been a member of the Russian oligarchy, and being so is what helped him amass his fortune.

“Furthermore, the regime in Russia has been there for years, and that somehow did not stop F1 from having a Russian Grand Prix, nor Russian drivers with wealthy Russian sponsors bringing in the money for Bernie Ecclestone before, and now, America’s Liberty Media.

“So was that all fine before, as long as the money was pouring in without any moral pressure or consequences of the war? Why did Mazepin senior’s money so ‘suddenly’ become dirty, blood money?

“That is not the case, and Nikita should not pay for the decisions that he did not make. If F1 wants to be on a moral pedestal, young Mazepin shouldn’t have been allowed in from the first place, not because of where he comes from, but because money should not be an alternative for talent.

“And that is why I have a problem with what the FIA have decided, which applies to other Russian athletes in other sports as well.

“One more thing, maybe Michael Andretti should pick up the phone to call Gene Haas. Maybe he would sell now?”

Paul Velasco: I have a feeling Nikita won’t be racing while the war is on

“Formula 1 has a tendency to paint itself into a corner of – damned if they do and damned if they don’t – controversy; case in point being the Russia issue aka Nikita Mazepin’s future in Formula 1.

“Many feel the FIA were limp wristed in offering Russian/Belarus drivers/ teams the ability to compete in FIA sanctioned events provided their allegiance to Russia is not manifested, in other words, renounce their country.

“I beg to differ, for any man that is a huge ask. Is not carrying the Russian flag and colours enough to keep Mazepin in a drive at Haas? Will he want to race under those conditions considering the origins of his father’s fortune?

“The problem there lies in that the only reason the 22-year-old is racing in F1 (as arguably the worst and least deserving driver on the F1 grid) is because of Daddy’s money which flows from Uralchem through Uralkali owned/chaired by Dmitry Mazepin, who notably is no stranger to sit-downs with Russian President turned warlord Vladimir Putin.

“With European sanctions on Russian corporates, parastatals and oligarchs going into immediate effect, how will the funding of Mazepin’s career continue?

“Probably from the family coffers, in a common ‘Dad-pays-for-son-to-race-from-own-pocket’ style, rather than financing from the Uralchem/Uralkali marketing budget. It will be chump-change for multi-billionaire Dmitry. The money will always be there but does it buy everything?

“In closing, I will throw it the other way with a couple of questions that need to be asked:

“Pure speculation on my part but I have a feeling Nikita won’t be racing while the Russia-Ukraine war is raging. But what do I know?