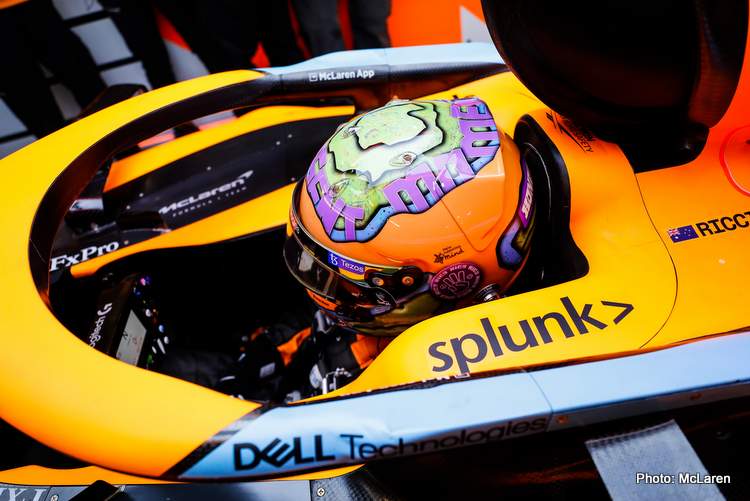 Daniel Ricciardo warns – despite McLaren’s encouraging Barcelona Formula 1 test – that Red Bull and Mercedes haven’t showed anything of their real pace yet.

McLaren had quite a decent test in Barcelona, as their 2022 F1 car, the MCL 36 proved to be fast and reliable, the team covering 365 laps over the course of the three-day testing session.

Daniel Ricciardo is on his second season with the McLaren, and seems upbeat about his chances for this season, after a tough debut season in Papaya last year.

“I think we’re in a good spot, but there’s always something to work on and improve,” Ricciardo told F1’s official website. “So, we’ll give the team some data to work with and some areas of work to do [and] I’ll focus on what I can keep doing better.

“Overall, a pretty flawless three days for the team, a really awesome start to the season. Thanks to everyone back at [the factory] for putting the hard work in over the winter to put us in this position,” Ricciardo said, crediting the work done back at Woking.

The Australian was one of the drivers to sample the Pirelli full Wet 18″ tyres as well as the Intermediates, as he was on driving duty on Friday afternoon, the last session where the track was soaked with water to simulate wet weather testing.

“It was good to get a little bit of wet running, there was quite a lot to learn from that,” Ricciardo reflected. “We then got into a different programme [to Thursday] where we racked up plenty of laps, which was really productive.

“Now it’s about giving that information back to the team and trying to build on this positive start,” he revealed.

Top teams are yet to show their hand

Despite all the positives of the first running McLaren had in Barcelona, Ricciardo remains grounded and cautious about the upcoming season, and the pecking order that will realistically unravel at the season-opening 2022 Bahrain Grand Prix on March 20.

The eight-time Grand Prix winner is adamant that the top teams are keeping their powder dry: “In any case, still your Red Bulls, your Mercs, they haven’t showed really anything yet.

“So we’ll see what happens when that kind of opens up a little more. But for now, focusing on ourselves… just trying to figure out still where we’re [weak].

“I think I know our strengths already, so just trying to know work on the weaknesses from a driving and a set-up point of view,” the 32-year-old admitted.

The 2022 F1 season will be of great importance for Ricciardo, as he looks to bounce back from a trying 2021 season, where he struggled to match his on-form teammate Lando Norris, with the team’s previous car, the MCL35M not suiting his driving style.

Despite winning the 2021 Italian Grand Prix at Monza, where he lead Norris home in a famous 1-2 for the team, their first victory since 2012, Ricciardo’s overall first season with McLaren remains not up to the standards expected from the former Renault and Red Bull driver.

Will the new MCL36 be a better fit for the Honey Badger?

365 laps later and that’s the end of #F1Testing in Barcelona. 🇪🇸

They’re fresh out the car with helmet hair but they’re always happy to talk to you, the fans! #FansLikeNoOther 🧡 pic.twitter.com/XGbgO1wMHX