Binotto: Some teams sandbagging more than others 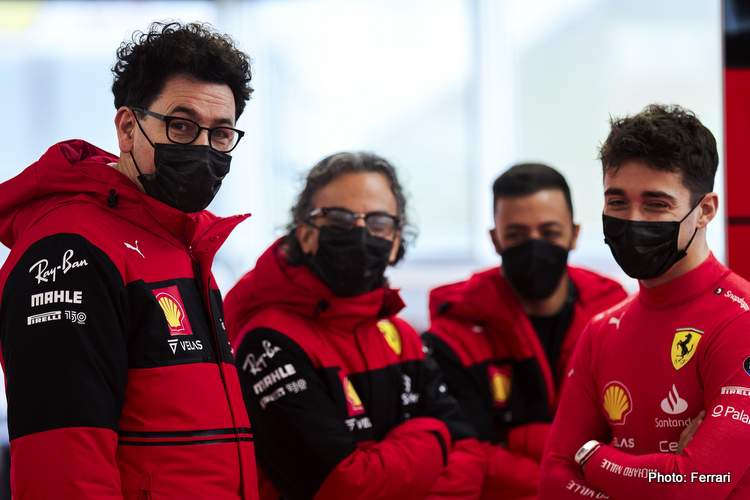 Ferrari is being tipped by various pundits to be at the forefront of the 2022 F1 pecking order, the Scuderia impressing with their reliability, having run the most laps over the three days of testing in Barcelona, racking up 439 laps, equivalent of 2052 km.

The team’s F1-75 also impressed with its innovative design, evident with the distinct design of its sidepod, while the word around the paddock is that the Scuderia have shown up with a decent power unit, now able to rival Mercedes and Honda (Red Bull power trains).

Binotto denies Ferrari are ahead

As report by La Gazzetta dello Sport said: “Rumours speak of major progress on the ICE (internal combustion engine), combined with a super-evolved hybrid part, for a total power output that would now be on a par with Mercedes and Honda.”

Toto Wolff was also quoted by the media saying: “We have the feeling that Ferrari currently has the most powerful engine. But we’ve only had three days of testing and winter testing can be deceiving.”

Speaking to Sky Sports Italia, Binotto rebuffed the claims of Ferrari superiority, and insists it is too early to know who is fast and who’s not.

“For judging the performance is too early, I think,” he claimed. “Some teams are sandbagging more than others. We will see that with the tests in Bahrain and with the first races.”

As for Ferrari’s plans to develop the F1-75, Binotto said: “At the beginning of the season, we will try to exploit all the potential of the car, that’s the first upgrade. We will do some small changes, but nothing drastic.

“So we will focus, at the beginning of the season, mostly on drawing out all the potential from the current car,” the 52-year-old revealed.

With the new regulation being highly prescriptive, many thought that the 2022 F1 grid will be made up of similar cars which, if painted in plain white, could not be distinguished.

However, that was not the case, as all ten cars where different, as each team has their own interpretation of the rules.  But according to Binotto, the different designs did not provide a deviations in performance.

“What surprised me is seeing all very different cars and despite that quite similar in terms of performance,” he admitted.

“When you see different conceptual choices, you expect to see that translated on track too with a performance difference.

“Instead I think the cars will converge with the performance even if they are very different in the forms,” the Swiss-born Italian predicted.

Ferrari, as all other nine teams, will be now burning the midnight oil over at Maranello, analyzing the data collected during the Barcelona running, and working on their upgrades ahead of the official pre-season test in Bahrain on March 10.