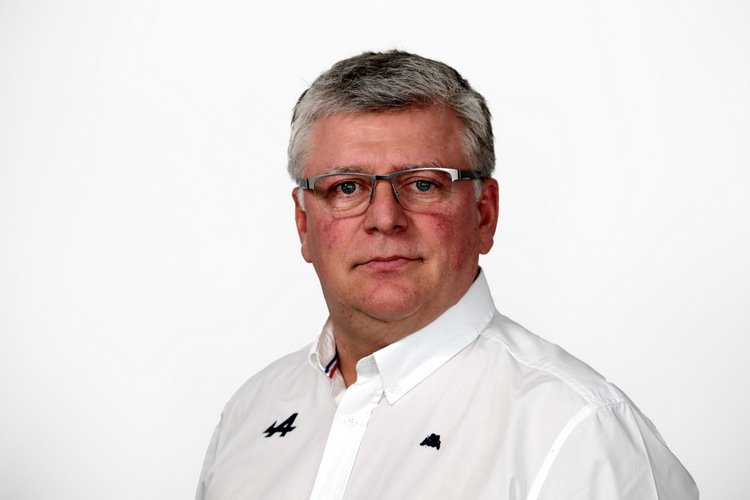 The Romanian-American, who left Aston Martin last month, will assume the role of team principal, which was shared by Marcin Budkowski and Davide Brivio last year.

Famin, most recently deputy secretary-general of sport at governing body FIA, led Peugeot to three consecutive Dakar Rally victories as head of its sporting division from 2016-2018 and a Le Mans 24 Hours triumph in 2009 as technical head of its endurance programme.

Alpine said the management changes replace a shared-responsibility structure at the top with a more streamlined approach, which would “maximise its performance” in F1’s new rules era.

“With Otmar and Bruno joining the team, we move to a new level for 2022,” said Alpine chief executive Laurent Rossi.

Szafnauer: My attention is focused on preparing for the start of the season in Bahrain

Former Force India, Racing Point and Aston Martin team principal Szafnauer is a long-time Formula 1 insider, who previously worked with Honda before moving to the Vijay Mallya-owned Force India team, which was bought out of administration by billionaire Lawrence Stroll in 2018 and rebranded as Aston Martin last year.

Media speculation had linked him with a move to Alpine as far back as November last year, with the team’s signing of Austrian water technology company BWT as title partners earlier this week only adding to it.

BWT previously sponsored Aston Martin, with the partnership going back to the team’s Racing Point and Force India days.

“My attention is focused on preparing for the start of the season in Bahrain,” said Szafnauer. “As one of the three-car manufacturers involved in Formula One, Alpine is fully armed to achieve its ambition, I can’t wait to start the journey.”

Alpine, winners with Ocon in Hungary last year, finished the 2021 season fifth in the overall standings.

The team, who are set to launch their 2022 car on Feb. 21 in Paris, beefed up their technical department earlier this month promoting F1 veteran Pat Fry to the role of chief technical officer and Matt Harman, formerly of Mercedes, to technical director.

The team’s target is to fight for the championship within 100 races of the introduction of the sport’s radical new rules this year. (Reporting by Abhishek Takle)

BWT Alpine F1 Team is delighted to announce the appointment of Otmar Szafnauer to the role of Team Principal and Bruno Famin as Executive Director of Alpine Racing in Viry-Châtillon, both reporting to Laurent Rossi, CEO of Alpine.

As detailed in November 2021, this new organization is set to optimize the team’s performance as it prepares for the new technical regulations introduced from 2022. The arrival of two highly experienced and recognized motorsports professionals confirms BWT Alpine F1 Team’s ambition, defined by Luca de Meo, CEO of the Renault Group, and Laurent Rossi, to fight for the championship within 100 races of the introduction of the new regulations.

As Team Principal, Otmar Szafnauer will lead BWT Alpine F1 Team in Enstone and at the races over the season. Otmar is one of the most talented and respected Formula 1 managers and will bring his 33 years of experience in motorsport to the team.

His objective will be to manage BWT Alpine F1 Team in consistently delivering all aspects of Alpine’s performance including engineering and race management. Otmar will also help the team get the best out of Esteban Ocon and Fernando Alonso’s talents.

After beginning his career as an engineer with Ford Motor Company, Otmar arrived in F1 in 1998 with British American Racing as Operations Director before joining Honda as Vice President of its F1 programme. He has consistently proved his talent to fully exploit a team’s potential during his different tenures.

At Force India, he led the team from last in the Constructors’ Championship to a solid fourth position, despite having the lowest budget and number of employees in the paddock. He also led Racing Point to their first win and fourth position in the Constructors’ Championship in only their second season, and Aston Martin to their first-ever podium in F1.

Szafnauer: “I am thrilled to join BWT Alpine F1 Team and ready to get to work with everyone to achieve our challenge: bring the team to fight for the Championship within the next 100 races.

“My attention is focused on preparing for the start of the season in Bahrain. As one of the three car manufacturers involved in Formula 1, Alpine is fully armed to achieve its ambition, I can’t wait to start the journey!”

The Frenchman will bring his unique experience in motorsport to Alpine, with the mission to pursue the development of Alpine’s Formula 1 engine, and to maximize the transfers of technologies from Formula 1 to Alpine cars. Bruno and the technical team of Viry-Châtillon will put in place measures and structures to ensure the Enstone chassis team has a Power Unit able to race competitively under the new regulations.

Most recently Deputy Sport Secretary-General at the FIA, Bruno showed his talent over more than 15 years at Peugeot, where he led the Endurance team’s technical programme, culminating in the Peugeot 908 victory in Le Mans in 2009, and 24 victories over 32 races, before he became Director of Peugeot Sport in 2012.

Tasked with relaunching Peugeot’s sports programme, he proved his talent to develop cutting-edge technologies to drive cars towards victory, leading to a record at Pike’s Peak in 2013, a Teams’ World Championship in Rallycross in 2015, and three consecutive victories in the Dakar between 2016 and 2018.

Famin: “It’s great to be back in competition, and even greater to join Alpine, with such ambition and unique engineering capacities. Viry-Châtillon is among the greatest factories one could dream of, I can’t wait to join its amazing talents, and to work closely with the teams in Enstone, Dieppe, Les Ulis and Boulogne-Billancourt.”

The MotoGP great who joined the team in 2021, will continue delivering his unrivaled capacity to identify and develop young potential as Director of Racing Expansion Projects, overseeing participation in all racing categories, including the Alpine Academy.

Fernando Alonso and Esteban Ocon’s relationship was key to Alpine’s performance in 2021 and Davide will aim to foster this team spirit in all racing categories.

Within his mission Davide will also be in charge of identifying, developing and bringing to life projects around new opportunities for Alpine within the world of motorsport and to explore new territories to foster Alpine’s development in the sport.

Brivio: “Alpine’s band of racers is a key to its long-term performance, and I’m thrilled to be able to contribute to the exciting ambition to shape a new culture within racing that is responsible and inclusive.

“Formula 1 is a flagship, but we also need to develop our ambition in new territories, and I am ready to support Laurent Rossi towards this goal.”

Laurent Rossi, CEO of Alpine, commented: “With Otmar and Bruno joining the team, we move to a new level for 2022. Otmar will bring his unique experience in motorsports and his uncompromising desire to win, while Bruno’s proven track record in building technologies that make a difference in competition and their subsequent transference to road cars is critical for our project as a sports team and as a brand.

“Over the past year I have seen Davide’s talent to identify the best in people, and to make them perform as well as they can. I am delighted to utilize this unique skill across all existing Alpine assets and new ones we are just starting to explore. Our band of racers is complete and ready to bring the team towards its ambitious objectives in 2022.”