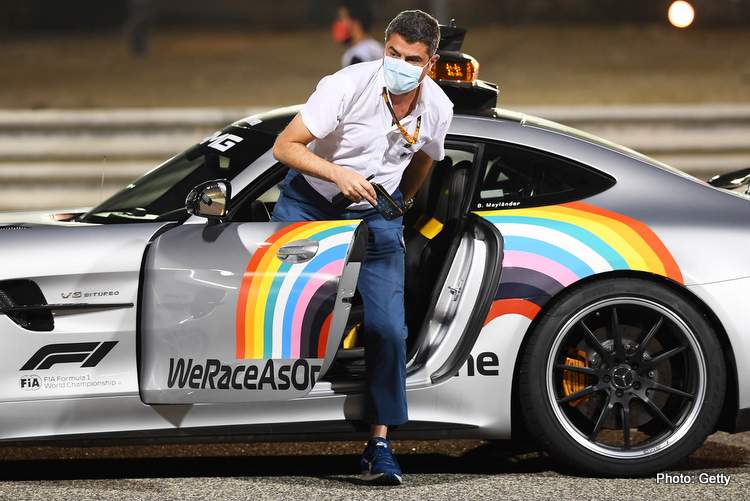 Michael Masi’s future in Formula 1 seems to be even more grim, as FIA  executive director of single-seaters Peter Bayer said there could be a new Race Director for 2022.

Reports about Michael Masi’s future have been aplenty recently, as we previously reported that the F1 Race Director’s future maybe insecure with the FIA planning a race-management restructure.

Peter Bayer, the FIA executive director of the single-seater division, spoke in an interview with Speedweek about the whole Masi situation in the aftermath of the controversial 2021 Abu Dhabi GP, and the ongoing FIA investigation of the matter.

“In those seconds in which he had to decide, he had several options, all based on the regulations,” Bayer began. “He could have ended the race behind the safety car, he could have stopped, but Nicholas Latifi’s accident wouldn’t have justified that. Or he could have done what he did, which was to get out of there somehow.

“I always compare the situation to a soccer referee when a disputed penalty was awarded or not. It’s also about having respect for the race director.”

What will the FIA change?

Bayer revealed that the FIA plans to make changes to the job description of the Race Director by “dividing the various tasks of the race director, who is also sports director, safety and track delegate” which he admites is “simply too much” with the solution being that “these roles are divided between several people”.

“This reduces the burden on the race director,” he insists.

“The second point is questioning the current regulations, especially the subject of the safety car. The NASCAR series, for example, stops counting laps when neutralization is necessary in the last two laps of the race and adds the laps at the end of the safety car period. However, this could cause a fuel problem in F1, so this is being looked at more closely.

“The third theme is the idea of ​​creating a constant connection during the race to a “mission control” – how they keep the teams connected to their factories. We are considering establishing a backup team in Geneva that can support race control.

“The fourth point is the constant radio traffic,” Bayer went on. “We will abolish the ordeal of the race management and make massive changes.

“The team bosses will no longer be able to get involved on this channel, but the team managers will still be able to, they have to be able to ask questions.

“We want to build in a buffer with an employee who accepts these requests. In the future, the race director will be able to concentrate on his task and will no longer be distracted,” he explained.

Masi was told he might not be around in 2022

When asked about Masi’s position after all the changes are implemented, Bayer admits that it is not secure at all.

“That’s not decided yet,” he pointed out. “Michael did a super job in many ways. We definitely don’t want to lose him. We told him that, but also that there is a possibility that there could be a new race director.

“I can only make suggestions to the World Council and they will definitely include Michael,” Bayer claimed.

As of Masi’s personal take on matters and his will to push on with his job, the FIA director said: “He has developed a relatively thick skin against attacks by individual teams.

“What became unbearable are reactions on social media, where nothing is shy, as seen in the death threats against Williams driver Latifi.

“Michael doesn’t have a social media account, but the hostilities on other channels really hit him. In our talks, I assured Michael of the support of the association and let him know: We want to continue working with you, but I also need your understanding that we have to deal with the issue,” Bayer concluded.

The results of the ongoing investigation – launched by the FIA to analyze what happened at the 2021 F1 season finale in Abu Dhabi, and the manner in which Michael Masi administered the safety car period prompted by Nicholas Latifi’s crash – are expected to be announced on March 18 as per the confirmation of the sport’s governing body.