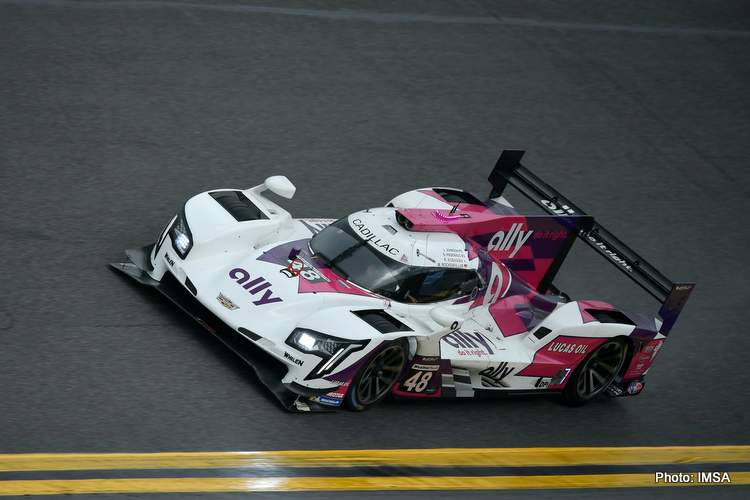 Former Formula 1 driver Kamui Kobayashi set the fastest lap time in practice for for the Rolex 24 at Daytona on Thursday, driving the Cadillac DPi-VR.

The Japanese driver turned the fastest lap around the 3.56-mile Daytona International Speedway road course in the second of Thursday’s IMSA WeatherTech SportsCar Championship practice sessions for Saturday’s Rolex 24 At Daytona – setting the quick time of the day with the evening practice still to come.

Kobayashi, teaming with seven-time NASCAR Cup Series champion Jimmie Johnson, Mike Rockenfeller and Jose Maria Lopez in the No. 48 Ally Cadillac DPi-V.R for the four IMSA Michelin Endurance Cup races, needed just five laps in the 90-minute session to log the best lap. He was encouraged by the session, even if he does not expect the damp conditions experienced Thursday to be an issue during the race.

“The track conditions are damp, not really wet,’’ Kobayashi said after being clocked at 1 minute, 35.470 seconds (134.241 mph). “I think the situation is quite good for the race because the weekend seems to be sunshine.

“I felt really good and the team did a great job,’’ he added.

Pipo Derani was second fastest in the No 31 Whelen Engineering Racing Cadillac (1:36.964) on a cool, drizzly afternoon that saw plenty of action as teams dialed in their cars for the weekend race. The pole-sitting Daytona Prototype international (DPi) car – and three time defending overall race winner – No. 10 Konica Minolta Acura ARX-05 was only 32nd quickest overall, driver Ricky Taylor more than 13 seconds behind the No. 48. Ten of the 61 entered cars didn’t turn a timed lap in the session.

The No. 20 High Class Racing ORECA LMP2 07 was third quickest overall and tops in Le Mans Prototype 2, with Nico Mueller at the wheel for a lap of 1:37.012. Felipe Fraga set the quick time in Le Mans Prototype 3 (LMP3) in the No. 74 Riley Motorsports Ligier JS P320 that is the defending Rolex 24 class winner.

The final WeatherTech Championship practice before the race starts at 11:20 a.m. Friday. The 24-hour race is scheduled at take the green flag at 1:40 p.m. Saturday, with live coverage on NBC beginning at 1:30 p.m.

Racers try to learn something new every lap, even when conditions aren’t ideal.

With the forecast for Saturday and Sunday calling for sunny skies but bitterly cold temperatures, Thursday’s soggy conditions are unlikely to be replicated during the race. But it was still an opportunity to collect data for the future.

Crucially, competitors in the GT Daytona (GTD), LMP2 and LMP3 classes had exclusive access to the Daytona road course for the first 15 minutes of the session, when conditions were at their best. The DPi and GTD PRO classes had the track to themselves for the last 15 minutes, when the track was soaked.

Not surprisingly then, a GTD entry – the No. 57 Winward Racing Mercedes-AMG GT3 that was the class winner in last year’s Rolex 24 – was fastest of the 35 GT cars in the field. Mikael Grenier toured the DIS road course in 1:46.577 (120.251 mph) early in the afternoon session.

“The first 15 or 20 minutes of Practice 2 was dry, and so far, our car is going well,” said Grenier, who finished second in the 2021 Rolex 24 as a co-driver of the No. 75 Sun Energy 1 Mercedes. “On the dry laps, we could learn a few things because we could try some solutions on the car when the track conditions were not too bad.

“Anything can happen, but we are quite pleased with the car so far.”

Grenier said the didn’t expect the cold conditions forecast for the race to have an effect on the drivers. Daytime high temperatures are predicted in the low 50s, with nighttime perhaps dipping into the 20s.

“The most important thing is to not get cold between the stints,” he noted. “We have to be in the pits maybe an hour before we drive, so you try not to be cold. It shouldn’t be a problem in the car. I guess the only good thing about a very cold race is it will be comfortable in the car.”