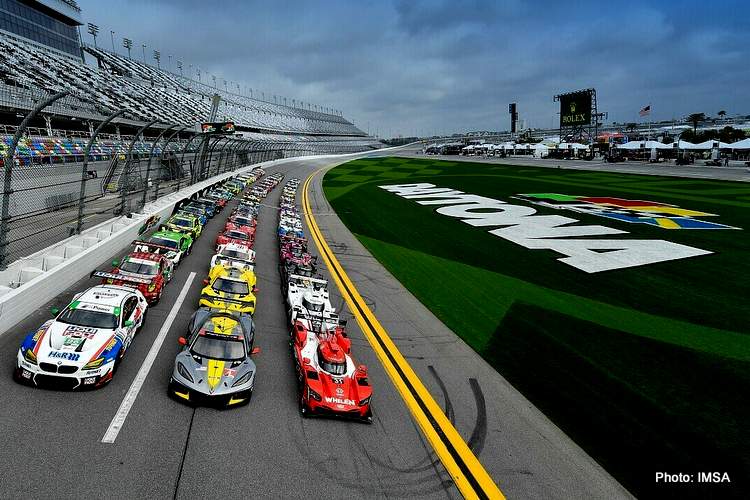 This weekend’s Rolex 24 at Daytona pits former Formula 1 drivers against current and past Indycar stars as well as the cream of sportscars and GT drivers, for one of the greatest prizes in endurance racing.

If there was a grand slam of long-distance racing, the legendary Daytona 24 hours would be right up there with the great 24-Hour races at Le Mans, Spa-Francorchamps and the Nurburgring.

Hence no surprise that a quality field of drivers is on the brink of another 24-hour adventure, the first of which was run in 1966 and won by Ken Miles and Lloyd Ruby driving the iconic Ford GT40 Mark II.

Winners since then include some of the greatest names in motorsport, each edition of the great race held on the Roval version of the NASCAR track that hosts the Daytona 500 next month.

Of the Indycar stars starring this year, Alex Palou had a fabulous first year with Chip Ganassi Racing. He won his first IndyCar race and parlayed it into the series championship. He bought his first car – a Porsche – and attended his first concert and first NASCAR race and quietly married his longtime girlfriend during the offseason.

What can he possibly do for an encore?

His first chance comes this weekend, when Palou makes his debut in the Rolex 24 at Daytona, the longest endurance race of his career. Team owner Ganassi has revived his “star car” concept at Daytona and will field a pair of Cadillacs loaded with talent.

The Spaniard will share the No. 01 with his IndyCar teammate Scott Dixon, a six-time series champion, as well as the two full-time IMSA drivers: Sebastien Bourdais, a four-time IndyCar champion, and Renger van der Zande, a two-time Rolex winner.

Palou is in a field full of superstars and part of a stacked team – his IndyCar teammate Marcus Ericsson is part of the sister No. 02 Ganassi car that includes former Formula 1 driver Kevin Magnussen – and doesn’t feel as if the title he won four months ago gives him much clout.

“I think the championship was good for us, but it was not amazing,” Palou told The Associated Press. “A lot of people always talked about the other teams, so we need to do more to have people talking about us.

Ericsson then interrupted his teammate: “I’ve never even raced at Daytona.”

But at Daytona the two are among a dozen full-time IndyCar drivers in the field, all looking to shake away the offseason rust and find the rhythm they’ll need when their season opens Feb. 27 across the state in St. Petersburg.

Dixon is always in the twice-round-the-clock sports car race and Saturday will be his 19th consecutive start. Alexander Rossi returns for another stint with defending Rolex winners Wayne Taylor Racing, while Simon Pagenaud and Helio Castroneves will open their first full season driving for Meyer Shank Racing as part of the Rolex lineup celebrating Shank’s 10th anniversary of his Daytona victory.

Rinus VeeKay is making his Rolex debut with Racing Team Nederland, an LMP2 entry composed entirely of Dutch drivers. Also in that class is the trio of young IndyCar stars Colton Herta, Pato O’Ward and rookie Devlin DeFrancesco, who are driving for DragonSpeed USA.

Herta and O’Ward have competed against each other since they were children and have been teammates before, while Herta and DeFrancesco will be teammates this season at Andretti Autosport in IndyCar.

Jimmie Johnson is racing for the overall victory with Action Express Racing, and Indy Lights champion Kyle Kirkwood is in the new GTD Pro class driving for Vasser Sullivan Racing, a Lexus team desperate for a Rolex victory.

“Every single one of my seasons have all been based on momentum. Usually, my worst race is the first race of the year, then I build on top of that,” Kirkwood said.

“Starting it off early with the 24-hour, trying to get into that race mode, is super important. I did it last year. It was a huge help. Being with the Lexus guys, Vasser Sullivan has been a blessing in my career because I´ve learned so much with them in sports cars that actually translate over to IndyCar.”

Townsend Bell, the NBC Sports analyst, is in the second Vasser Sullivan car that will race in the GTD class and spent two days in Indianapolis last week with the IndyCar field. He said multiple drivers bemoaned not being in the Rolex and said “right now it’s harder to get into this race than it is to get into IndyCar.”

“As limited as IndyCar testing is right now, any track time in any sort of real racing environment has got to help,” Bell said.

“The race craft, working with the team, having the adrenal levels high – which you don’t get in any kind of training you do – there’s nothing like what you get from pure competition. If I was a full-time IndyCar driver, I’d want to be here because when St. Pete hits… they want to have some momentum,” added Bell.