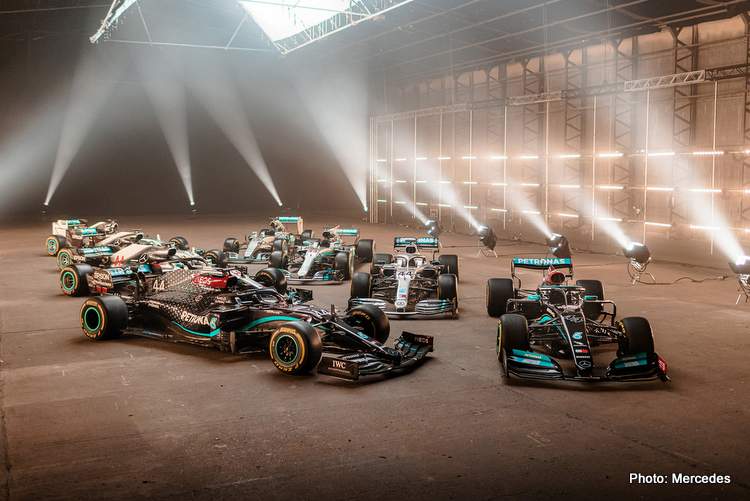 The eight-time Formula 1 Constructors’ Champions have announced today the date of reveal for their 2022 F1 car, the W13 E Performance.

The announcement comes in the midst of speculations surrounding the team’s star driver Lewis Hamilton, who has been under the radar ever since he lost the 2021 F1 Drivers’ Crown to rival Max Verstappen at the Abu Dhabi season finale back in December, under controversial circumstances that have been thoroughly documented and reported by now.

The team announced in a press release that the car named the W13, with which the team’s new recruit George Russell and seven-time champion Lewis Hamilton (should he decide to return) will contest the 2022 season will be revealed to the public on February 18, with speculations also surrounding the team’s new car and whether it will return to its iconic silver colour this year.

Mercedes tweeted the name of their 2022 racing machine, with the colours used on the graphics being silver along with the colours of the team’s title sponsor Petronas. So is the silver arrow back?

We are excited to announce that our 2022 Formula One car will be officially unveiled on Friday 18 February in a special digital launch event from Silverstone.

A wide range of assets will be provided on the day of the car reveal, including initial imagery, technical information, profiles on our team’s key figures and Q&As with members of our senior leadership team.

There will also be virtual media opportunities with our key personnel and drivers on the day. More information on those opportunities and a detailed plan of what assets will be available, will be shared with the media before the event.

The W13 will later that day be put through a shakedown programme to complete initial system checks on the Silverstone circuit.