Wolff: I will meet with Lewis in February 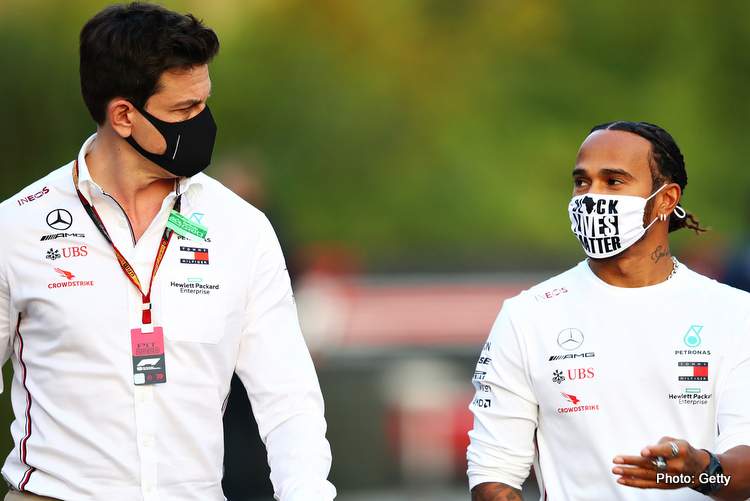 With Lewis Hamilton’s post 2021 Formula 1 season finale silence yet to be broken, Toto Wolff revealed that he and the Briton will sit together in February the latest.

Hamilton has not spoken yet to the media, or through his social media platforms, since the 2021 Abu Dhabi GP, when Max Verstappen beat him to the 2021 F1 Drivers’ Crown, his actions – or lack of on this case – fueling rumors and speculations about his future in the sport.

With the FIA announcing an investigation in what happened in Abu Dhabi, and reports mentioning that Hamilton’s future plans depending on the outcome of the investigation expected on March 18 as per a statement by the sport’s governing body, the seven-time world champion’s future in F1 is kept in the dark with just rumors flying around all media outlets.

Mercedes team boss Toto Wolff spoke recently in an interview with Kronen Zeitung, and he was naturally asked yet again about Abu Dhabi and his star driver’s future in F1

“That will never be forgotten,” Wolff said of Abu Dhabi. “Because what happened to Lewis was just wrong. He was unbeatable that day. Until the race control blew the fuses, they decided on three violations of the rules. That’s just hard to understand.

“It will always lag behind us, although Max Verstappen is a worthy world champion over the course of the season. But that day, one was better than the other – and they didn’t win.

“I’m able to draw a line under that,” he went on. “We draw our conclusions from this and want to give the right answers on the track. That will be difficult enough with the new regulations.

A disgrace for F1 if Hamilton leaves

When asked about the Lewis Hamilton’s current state of affairs, Wolff said: “No matter what obstacle was thrown at him, he has known all his life that he has to speak on the track.

“But it is incredibly difficult for him until he has found a way between understanding what is right and what is wrong. That just takes time.

“I really hope we see him again,” was the Austrian response when asked if Hamilton will race in 2022. It’s the most important part of our sport.

“It would be a disgrace for the whole of Formula 1 if the best driver decided to retire because of outrageous decisions,” the Austrian who recently turned 50 claimed.

When asked when he will sit in person with the Hamilton, Wolff said: “In February at the latest – and certainly not for drinking tequila.

“I had enough of that in Abu Dhabi,” he jokingly added.

However Mercedes have tweeted on Monday a picture of Lewis Hamilton getting into the cockpit with the caption: “All fired up for another full-on week in the factory. Full steam ahead with project W13.”

Has the team inadvertently announced that Lewis Hamilton will be racing in 2022?

All fired up for another full-on week in the factory. Full steam ahead with project W13. 💪 pic.twitter.com/Ujn3sCK4Ar