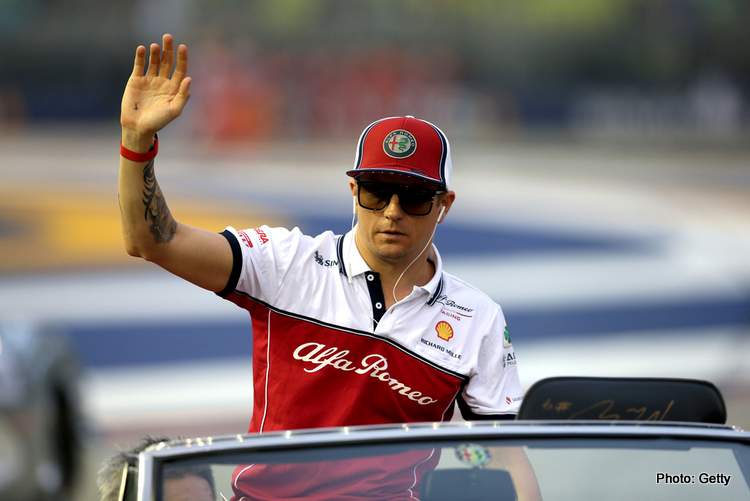 Kimi Raikkonen lobbed a parting grenade into the Formula 1 paddock ahead of the 2022 world championship season, claiming drivers are mere employees of teams with no input and their opinions not sought.

The 42-year-old Finn, a true legend of the sport, hung up his helmet at the end of last season bringing to a halt a career that included 349 Grand Prix starts; finishing on the podium 103 times, on 21 of those occasions as the winner.

Raikkonen’s greatest achievement was the 2007 F1 world title, the last scored by a Ferrari driver

Speaking to Sport Bild in his first sit down interview since the night in Abu Dhabi last month, Raikkonen was asked to compare the car he left behind at Yas Marina on 12 December 2021 and the ones he encountered on his F1 debut in Melbourne on 4 March 2001.

He explained: “Today the cars are much more reliable. In my early years, every race was like gambling in the casino. You never knew what you would get that day and whether you would even cross the finish line.

Raikkonen: We are only employees of the teams, just like mechanics

“But it doesn’t matter whether you like the development or not. We drivers don’t make decisions about the rules or where we race.

“We are only employees of the teams, just like mechanics. Formula 1 is not interested in our opinion,” from a veteran driver who was available for two decades for input.

Asked if he felt it was still a sport (as opposed to a WWE WrestleMania concocted affair) Raikkonen continued: “Since it is still a matter of driving the car in circles as fast as possible: Yes. We now drive a few more races a year and also in new countries but in the end, it’s about 20 drivers in 20 cars.

F1 has grown massively during the years Kimi lined up on the grid, but more so the world has also changed massively with the internet boom and the publishing revolution it spawned, including the outburst of social media which had yet to begin at the turn of the century.

“Much has changed in the past 20 years,” Raikkonen said. “Especially with social media, but that’s the way it is all over the world and not just in F1. Fans can now see almost everything which tends to be too much. I can only repeat myself: the drivers are only employees.”

Asked to recall his greatest win in the top flight, Raikkonen was stumped: “Phew, I don’t know. A victory is always a victory. There are 25 points for that. A few were very easy to drive to, a few more difficult. Maybe the ones from 2007 are a little more important.”

His last win was at the 2018 United States Grand Prix, 15 years after his first at the 2003 Malaysian Grand Prix, nevertheless his former nemesis Fernando Alonso says F1 will miss ‘The Iceman’ however, it might be said, Kimi won’t miss it and has no plans to return to the paddock, even if just for a visit.

Raikkonen: Driving is the only thing I liked about Formula 1!

“Only time will tell. I may never set foot in the paddock again. Formula 1 was never my life. There were always things that were more important to me.

“Nothing will change about that. I didn’t stop because I didn’t have the strength, but because I have better things to do than sit on planes and stay in hotels.”

Asked about his ‘retirement’ plans, Raikkonen replied: “None, and I don’t want to plan any either. My kids want a dog, but we haven’t decided yet. Maybe it’s enough for them that I will now spend more time at home again.”

Looking back on the twenty years Raikkonen spent in F1, a snapshot reveals that he was given his break as a precocious young driver, no one had heard of, by Sauber. Impressed in his first season. Built an incredible legacy for himself at McLaren before replacing Michael Schumacher at Ferrari and winning the title in 2007- his first year in Red.

The first ‘love affair’ between Kimi and Ferrari was relatively brief

The Scuderia reportedly paying handsomely (depending on who you believe between $10-million $15-million at the time) for him to take a sabbatical for a couple of years to make way for Fernando Alonso.

He returned with the Lotus/Renault ‘affair’ and even won for them before going back to Ferrari to play perennial number two until he made way for Charles Leclerc at Maranello, departing to join Alfa Romeo for a final three unspectacular seasons with the Swiss team that, poetically, gave him his debut.

Cruelly and fittingly, considering he turned from being once the fastest driver F1 ever witnessed (in his McLaren heyday) to a journeyman making hard work of keeping up with Antonio Giovinazzi, he scored a DNF for his final Grand Prix in Abu Dhabi.

Hardly a perfect end to a legendary career… “What is perfect? I’m just glad it’s over. Even the fact that I couldn’t finish the last race doesn’t matter,” declared Kimi.

As for his legendary status, Raikkonen was typically blunt: “People say that but I’m not interested in that. I know who I am, I’m Kimi!”