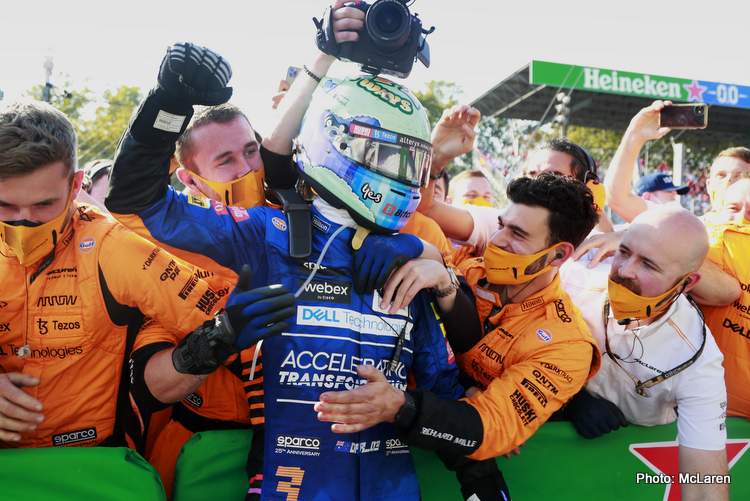 The 2021 Formula 1 season, Daniel Ricciardo’s first with McLaren was tough, but he admits having a family-style support at Woking, unlike the tough love he was used to at Red Bull.

Daniel Ricciardo debut season in Papaya orange was a character building one as – despite winning the 2021 Italian GP in Monza – he struggled to get on top of the handling characteristics of his McLaren MCL35M, and ended the season eighth in the Drivers’ Standings, two places behind his younger teammate Lando Norris.

Speaking to the media in a post-season interview, Ricciardo was asked if  happy was how he felt at McLaren, despite all the struggles, to which he responded: “Yeah, I do.

“That’s where the first half of the season was probably even more frustrating because I really do like the environment, and I have good relationships with the team.

“Everything other than the stopwatch was pretty good, but obviously, I just wasn’t giving them what I wanted to obviously,” Ricciardo admitted.

“That was in a way, tough. But moments like Monza, even Austin, Austin was a good weekend for me.

“These weekends are so much cooler because I really do get on with the team, I like their way about racing, I like the support that I’ve had as well,” the 32-year-old revealed.

Ricciardo admitted when asked, that having a similar below-par season at Red Bull would have resulted in a different treatment at the energy drinks outfit, especially with Helmut Marko being around.

He said: “Helmut is a guy which, through my junior career, there was a lot of tough love, and I think that was really good for me because it made me grow up quicker.

“Here, the first half of the season in particular, there was a lot of support and they weren’t trying to kick me down or put me down when I was already down, they were trying to bring me up,” the Aussie explained.

“I’m not saying I want to be coddled all the time, but I think their way about dealing with it and going about it and not overwhelming me was really nice, and I feel that.

“I feel that with the team. There is a lot of family-style support,” the eight-time Grand Prix winner concluded.

“A world title one day is 100 percent the goal – it’s always been the goal from day one,” he said.

Daniel Ricciardo left Red Bull for Renault at the end of 2018, in a shock move that lasted only for two seasons, before he jumped ship again to McLaren when Carlos Sainz was picked up by Ferrari for the 2021 season.

Asked what he thought of the move, Italiano said: “I can only speak for myself – do I think it was a good move? Yes, I do. No offence to Renault of course, but I really see the belief that this team has.

“Daniel made the decision, I wasn’t involved,” he pointed out. “I’m obviously just here to prepare him, and so far my dealings with McLaren have been nothing but positive. It’s easy for me to say I think he’s made the right call.

“Getting that win also was a great way to say: ‘Cool, this is why I joined, because I wanted a car that has the potential to win’,” Italiano concluded referring to Ricciardo’s win at Monza.

That win at Monza remains the only time the “Honey Badger” ascended the podium in 2021, as he failed to score points on nine occasions – one due to engine trouble – scoring 115 points in total, 45 less than Lando Norris,