Leclerc: Carlos better than me on tyre and race management 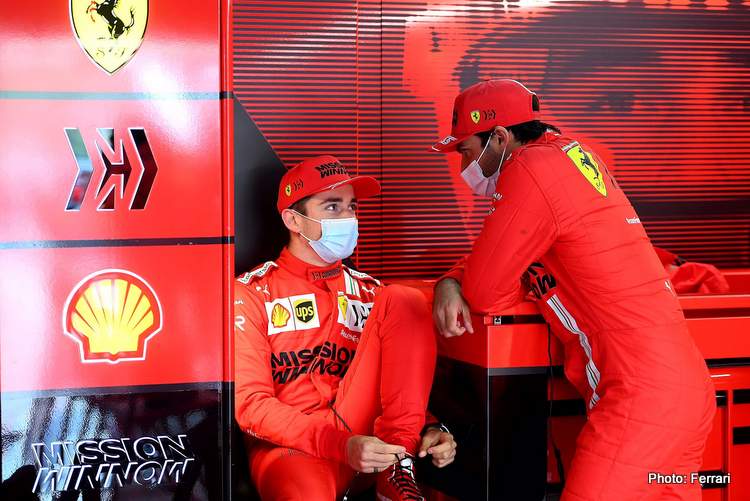 Ever since Charles Leclerc joined Ferrari, he has been the team sweetheart, but with Carlos Sainz joining in 2021 and beating him, the Monegasque identified his weaknesses against his teammate.

Charles Leclerc replaced Kimi Raikkonen at Ferrari ahead of the 2019 Formula 1 season, with the Monegasque having a dream start for his life in Red, finishing on the podium ten times that season, with two of those being wins in the 2019 Belgian GP, not to forget his dream win at the Italian GP that year in front of the Tifosi, after impressively fending off a race-long pressure seven-time World Champion Lewis Hamilton.

Leclerc humbled his former four-time World Champion Sebastian Vettel in the two seasons they shared the Ferrari garage, with the German shown the door at the end of 2020, after which he left to Aston Martin.

However, his new teammate in 2021, Carlos Sainz, turned out to be a match for the 24-year-old, as he seamlessly slotted into his role on his first season with the Scuderia, scoring four podium finishes on his way to fifth in the Drivers’ Standings, two places ahead of Leclerc who had a solitary podium finish in 2021.

Leclerc learned a lot from Sainz

Speaking to Motorsport.com about his experience with Sainz, and what he got out of it, Leclerc said: “We learned a lot.

“As always when you have a new team-mate you always learn, [such as] the new ways Carlos is approaching race weekends, the way he works, his talent, his raw speed also, the way he takes the corners.

“He had an amazing year, so he obviously pushed me very, very much to try and perform better at every race and it’s just been extremely interesting,” the two-time race winner reflected.

Leclerc then went on to identify where he needs to improve compare to his teammate saying: “I think maybe one of the strong points of Carlos is the race management and tyre management, and that was probably my weakness in 2019.

“I progressed a lot as a driver in 2020 and again last year, and part of last year was thanks to Carlos,” he concluded.

“In terms of drivers, as we have often said, I think it is the track that will dictate it,” was Mattia Binotto’s answer to Motorsport.com on how the drivers will be treated.

“So I don’t think that we need at this stage, and certainly we will not have a policy, of number one or number two. We will simply discuss it based on positions on track whenever it will be time,” the Ferrari Boss explained.

No one expected Sainz to beat Leclerc in their first season together at Maranello, but the Spaniard pulled that off with a calm under-the-radar performance, and it would be interesting to monitor how the pair get along in the future if the Spaniad keeps pushing the Monegasque as hard as he did in 2021, and how the latter will react to being beaten on what he must consider his own turf.

See you on the other side, #Tifosi 😁