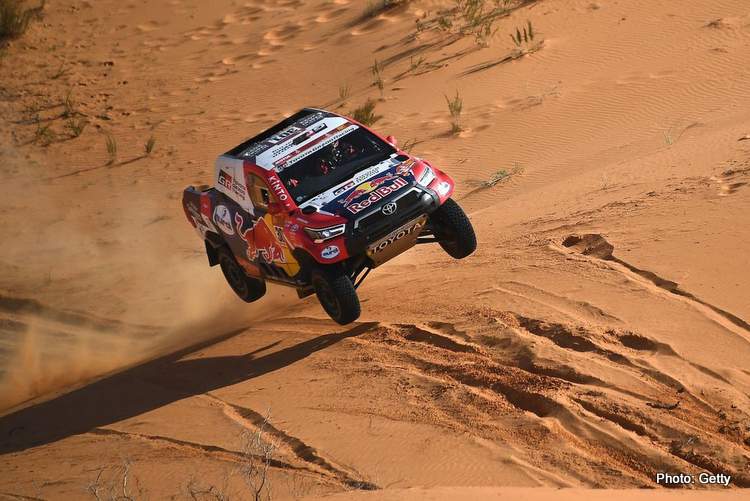 Qatar’s Nasser Al Attiyah won the fourth stage of the Dakar Rally in Saudi Arabia on Wednesday to go 38 minutes clear in an event under a close security watch after a French team vehicle was hit by an explosion in Jeddah last week.

The factory Toyota driver finished second in the 465km special stage from Al Qaisumah to the capital Riyadh but was promoted after Saudi driver Yazeed al-Rajhi collected a two minute penalty for speeding.

“We tried to keep a good push, without any risks, but our plan today was not to open (the way) tomorrow because there will be no bikes (ahead) and this will be difficult,” said Al Attiyah.

“Even if we lose time (tomorrow) we can start again the day after with a good road position.”

It was the 44th stage win of triple Dakar winner Al Attiyah’s career, and second this year in addition to the prologue.

Nine-times world rally champion Sebastien Loeb, the Qatari’s closest rival with the Bahrain Raid Xtreme team, was second on the longest stage of the rally, 25 seconds behind, with Audi’s Carlos Sainz third.

Sainz’s team mate Stephane Peterhansel, a 14-times Dakar winner but out of contention after a nightmare opening stage, lost more time with a broken shock absorber that forced the Frenchman to wait for assistance.

He spoke after French prosecutors opened a terrorism investigation into an explosion under a French team vehicle two days before the start of the event in Jeddah.

News of the blast emerged at the weekend, but rally organisers and the sports governing body have offered no explanation.

In the motorcycle category, Britain’s Sam Sunderland continued to lead after finishing sixth in a stage won by Spaniard Joan Barreda.

Russian Dimitry Sotnikov was the leading truck driver while Argentine-born American Pablo Copetti was out front in the quadbikes.

Chilean Francisco Lopez Contardo was top of the standings in the lightweight prototype category. (Reporting by Alan Baldwin)