Binotto: Sainz’s future to be discussed during winter 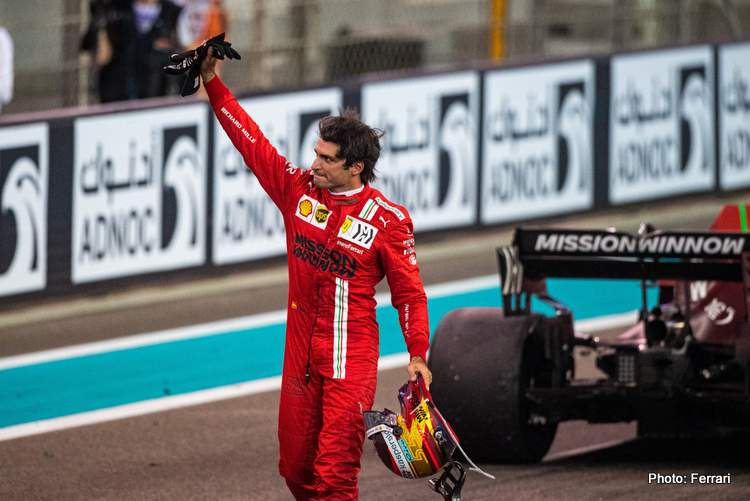 Carlos Sainz has delivered an impressive first Formula 1 season with Ferrari, with team principal Mattia Binotto revealing that the Spaniard’s future will be discussed over the winter break.

Sainz made a seamless transition into Ferrari this year, as he made Maranello his home in no time, and was at his consistent best finishing his season on the podium in Abu Dhabi, securing fifth in the Drivers’ Standings ahead of his teammate Charles Leclerc.

The media asked Binotto about the timing to discuss the Sainz’s future with the team after the Abu Dhabi GP.

Sainz did a great year

“I think Carlos did a great year,” Binotto began.

“When we signed a year ago, we said that winter time, so this is winter time, [is] the right moment to sit down and have a review of the season.

“That is something we will certainly do during the winter.

“There will be certainly a review altogether, and of the season itself, and we’ll start discussing what can be our future,” Binotto confirmed.

Ferrari has the best driver lineup in F1

The Scuderia boss went on to explain the rationale behind signing Sainz after showing his predecessor, quadruple Champion Sebastian Vettel, the door.

“When we signed with Carlos, the objective was to have two good drivers that were good racers, consistent and capable of scoring points for the team,” he said.

“I think it’s what we got this season. So I’m very proud of both of them.

“I think as I often said, we’ve got the best line-up in Formula 1, and I’m pretty happy with what Carlos did this season,” he revealed.

“Being his very first season with Ferrari, it was not straightforward and obvious.

“We signed with him because we said he is a good racer, consistent, always scoring good points. But I think he’s as well a good learner,” the Swiss-born Italian pointed out.

“During the season, he has improved, and I think that the end of the season is his best part of the entire season,” Binotto concluded.

Ferrari’s other driver Charles Leclerc, who is currently self-isolating after contacting Covid-19 for a second time, is on a long term contract with Ferrari up to 2026.

However, Gazetta Dello Sport has reported that the Monegasque has a performance based exit clause in his contract, which allows him to break free from his commitment to the team should they fail to secure third or higher in the Constructors’ Standings.

Leclerc finished this season seventh on the Drivers’ Table, two position behind his teammate, something the 24-year-old won’t be happy about, and will be looking for a turnaround in 2022.

Ferrari have been talking up their chances for next year, when the new aero and tyre regulations come into effect, the team emphasizing that all their focus is on a Red resurgence in 2022, with all the teams effectively starting from scratch.

If Leclerc’s exit clause is not just a rumor, this means the pressure will be on the Maranello squad to deliver their star driver with a decent car with which he can fight for wins, and maybe the title.