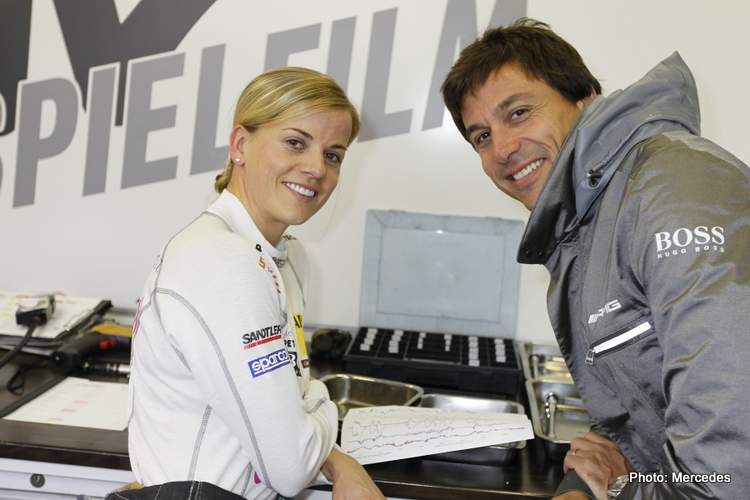 Susie Wolff, wife of the World Champion team’s boss Toto Wolff, came out to say that Lewis Hamilton was robbed of the championship at the season deciding 2021 Abu Dhabi Grand Prix.

Wolff is no stranger to the world of motor racing, being a former racing driver herself, competing in karts, Formula Renault and DTM with Mercedes.

In 2014, Wolff made history becoming the first woman in 22 years, to take part in a Formula 1 race weekend at the 2014 British Grand Prix at Silverstone, as she took part in Friday’s practice session for the Williams F1 team, with her F1 experience cut short due to an oil pressure problem.

The Scot retired from driving in 2015, and launched her ‘Dare to be Different’ initiative in 2016 aimed at supporting female talent in motorsports, before becoming Team Principal and shareholder of the Rokit Venturi Racing Formula E team in 2018.

With the events of last weekend’s finale in Abu Dhabi transpiring the way they did, Wolff took to Twitter to vent her frustration at the situation.

“Going in to this final race weekend, I believed both teams and both drivers deserved to win,” she wrote. “It was going to be a spectacle, a historic race that we all hoped would end without controversy. That wasn’t to be.

Lewis was robbed, which left me in disbelief

“What happened is still hard to comprehend and leaves me with a sick feeling,” Wolff went on. “Not the losing – and not Max or Red Bull – they are deserving winners and we always knew it was a strong possibility we may not win – but the way in which Lewis was robbed has left me in utter disbelief.”

Wolff then spoke of the way Race Director Michael Masi handled the situation at Abu Dhabi.

“The decision of one person within the governing body who applied a rule in a way which has never been done before in F1 single-handedly decided the F1 Driver World Championship.

“Rules are rules, they can’t be changed on a whim by one individual at the end of a race.”

Congrats to Max, Lewis is the greatest there has ever been

She added: “Lewis Hamilton, you have shown incredible integrity and dignity in the face of injustice.

“You are the greatest there has ever been. The outcome of the last laps on Sunday? Those who know, they know, even those who can’t quite bring themselves to admit it.”

Wolff then congratulated Max Verstappen on his title: “Congratulations Max and congratulations to each and every member of Mercedes-AMG F1 on your record-breaking eighth constructors title.

“I hope by March of next year there is a governing body with sporting integrity and fairness at its core so I can fall back in love with F1,” Wolff concluded.