After an undramatic first practice session for the 2021 Formula 1 Abu Dhabi Grand Prix, FP2 went ahead on Friday afternoon at Yas Marina Circuit, with Hamilton turning on the heat and going fastest, with Kimi Raikkonen crashing last minute.

Perhaps the most notable aspect of FP1 should be the massive drop in lap times, between Yas Marina, the 2021 version, and the track’s previous iteration, as the best lap registered on Friday’s morning practice session this year was over 12s faster than its 2020 equivalent.

It remains to be seen however, whether the changes done to the circuit shall serve as a catalyst to the racing spectacle, as the Abu Dhabi venue notoriously known for being a tough circuit for F1 cars to follow closely and overtake.

Fernando Alonso is best placed to say a thing or two on the subject, his 2010 race – where he couldn’t overtake Renault’s Vitaly Petrov and consequently lost out to Sebastian Vettel in that year’s title race – still most probably haunting him.

But back to the “here and now”, as lap times went tumbling even further in FP2 – that was red flagged in the final seconds with Kimi Raikkonen crashing his Alfa Romeo – as Lewis Hamilton went fastest in the cooler conditions of the Yas Island afternoon, registering a time of 1:23.691, over a second faster than Max Verstappen’s FP1-topping time.

Second place went to Alpine’s Esteban Ocon, 0.343s slower than Hamilton, and ahead of Valtteri Bottas in third, who was a further 0.049s behind the Frenchman.

Bottas had a moment at Turn 14 early on during the session, his right-rear tagging the wall, with no harm done.

The other title contender Max Verstappen had to settle for fourth for FP2, over six tenths slower than his rival Hamilton.

Sergio Perez followed his teammate in the sister RB16B, finishing fifth, an extra half a tenth behind, with Fernando Alonso a further tenth behind the Mexican, in sixth, in the other Alpine.

Yuki Tsunoda was the faster AlphaTauri driver for the second session in a row, as he finished the afternoon practice session seventh behind Alonso, less than half a tenth slower than the Spaniard.

Eighth went to Charles Leclerc in the Ferrari, 0.866s off the pace of the leader, as Carlos Sainz was almost three tenths further behind in ninth.

Pierre Gasly tailed the top ten in tenth, and 1.249s slower than the benchmark time.

Kimi Raikkonen spins and hits the wall at Turn 14

Thankfully he is able to get out of his car#AbuDhabiGP 🇦🇪 #F1 pic.twitter.com/TNQr9M80xh

What of the rest? Raikkonen crashes.

McLaren remained unable to break into the top ten, with Daniel Ricciardo finishing 11th, 1.268s down on the top time, and was followed by Alfa Romeo’s Antonio Giovinazzi in 12th, a tenth and a half slower.

Lando Norris was 13th in the sister McLaren, 1.462s too slow, and was chased by Sebastian Vettel in the Aston Martin 0.042s behind in 14th.

Lance Stroll went 15th fastest, almost two tenths slower than his teammate, with Kimi Raikkonen in 16th place behind the Canadian, 1.749s slower than the best time; that is before binning his Alfa Romeo at Turn 14, which seems to be a corner to watch out for this weekend.

Goerge Russell who was back on duty for Williams after missing the morning session (made way for Jack Aitkin), was 17th, 1.858s far from the best of times.

His teammate Nicholas Latifi, who brought out the yellow flags, spinning at Turn 13, 12 minutes into the session was 18th fastest, after damaging his rear wing.

The Hass duo were again 19th and 20th, Mick Schumacher leading his teammate Nikita Mazepin by almost half a second. 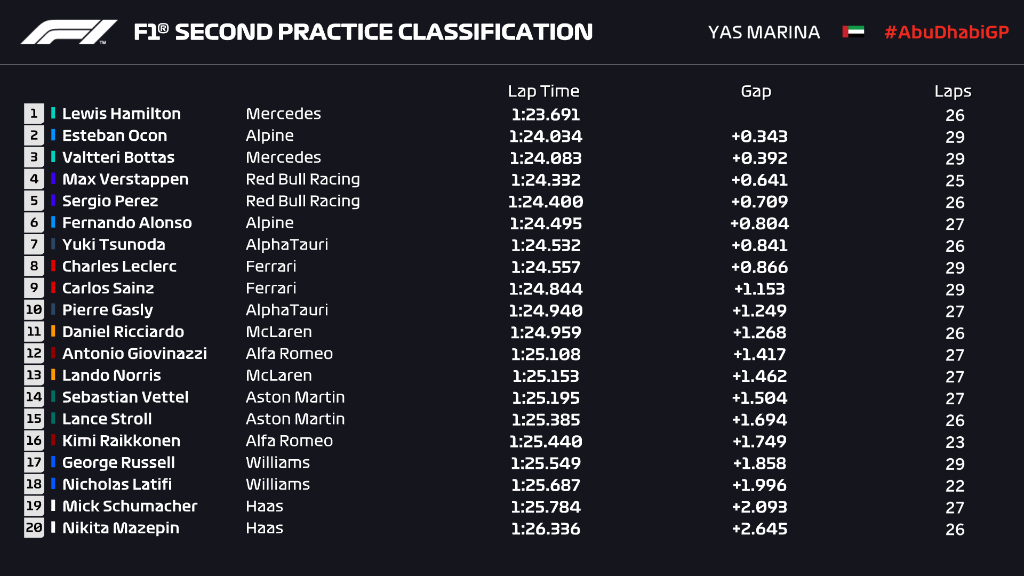