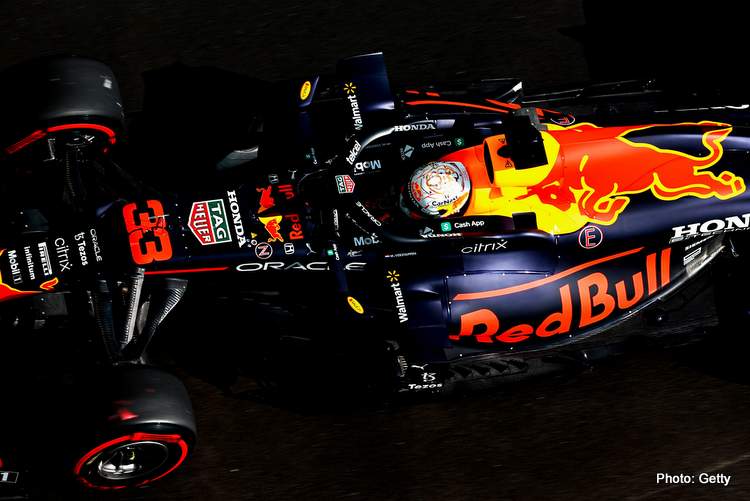 Finally the 2021 Formula 1 season finale was upon us, as FP1 for the Abu Dhabi Grand Prix was held at a facelifted Yas Marina Circuit with Max Verstappen fastest, setting the benchmark for the final weekend of the season.

The F1 circus entered the final weekend of the season, the 2021 Abu Dhabi Grand Prix, with anticipation and anxiety, as the world awaits to see who will emerge a 2021 F1 World Champion after Sunday’s dusk-to-evening race around the revamped Yas Marina circuit, with Lewis Hamilton and Max Verstappen even on points, the Dutchman’s one win more than the Briton being his only advantage.

Red Bull won 2020’s race courtesy of a dominant Verstappen performance, who was operating under no pressure not being a title contender that year, as well as racing around an older version Yas Marina track. Will the revised track suit the Bulls as much? Or will Mercedes shine yet again following a strong run of form?

Verstappen has a decent start to the weekend

Well if FP1’s results are anything to go by, which they aren’t, then the smart money would be on Verstappen retaining his edge at Yas Marina, who went fastest with a time of 1:25.009, despite complaining of a crooked steering wheel during the session.

Noteworthy, that this year’s top time in FP1 is over 12.3s faster than last year’s 1:37.378 also set by Verstappen, which means the changes done to the circuit have done their expected job of making the track faster and more flowing.

Second fastest was Valtteri Bottas 0.196s slower than Verstappen and ahead of his teammate Lewis Hamilton who was third and 0.150s further down the road.

The seven-time World Champion had his best time (0.033s slower than his title rival’s best) deleted for exceeding the track limits at Turn 16.

Sergio Perez was off to a better start than in Saudi Arabia last weekend, and took fourth 0.354s off his teammate’s top time.

Yuki Tsunoda was fifth fastest for AlphaTauri, 0.015s slower than Perez, the Japanese followed by Alpine’s Fernando Alonso, the Spaniard sixth and 0.616s off the pace.

Pierre Gasly was seventh in the sister AlphaTauri over eight tenths slower than the benchmark time, and was followed by the Ferrari of Charles Leclerc in eighth, who was on helmet-cam duty today, and 0.024s slower than the Frenchman.

Ninth place went to Carlos Sainz in the other SF21, who was 0.877s slower than the faster recorded time, as Aston Martin’s Sebastian Vettel rounded up the top ten almost a second slower than Verstappen benchmark time and spinning at Turn 15 on last minute push just before the chequered flag.

First of the top ten outsiders was Esteban Ocon, who finished 11th, 1.016s slow, the Alpine driver having a proper scare early on in the session missing the wall after losing control of his car.

Lando Norris, whose McLaren MCL35M was sporting a tweaked livery was 12th and a tenth slower than Ocon.

Soon to be a retired F1 driver, 2007 Champion Kimi Raikkonen, was 13th for Alfa Romeo, followed by his teammate in 14th, the pair separated by over two tenths.

Lance Stroll was 15th fastest almost, 1.6s off the pace and ahead of the other McLaren of Daniel Ricciardo in 16th, and 1.667s off the best time.

Williams’ George Russell missed his last FP1 with his team and made way for Jack Aitkins who ended the session 17th fastest, ahead of team regular Nicholas Latifi in 18th but nothing separating the pair.

The final two spots were as usual reserved for the Haas duo Mick Schumacher and Nikita Mazepin, the German over six tenths faster than the Russian. 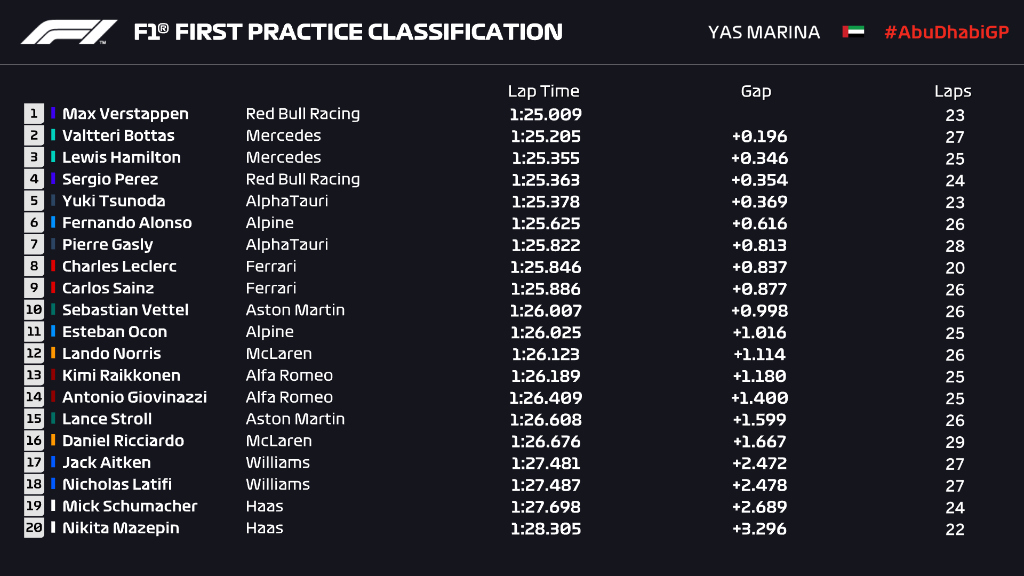