Vettel: To me Michael is still the greatest 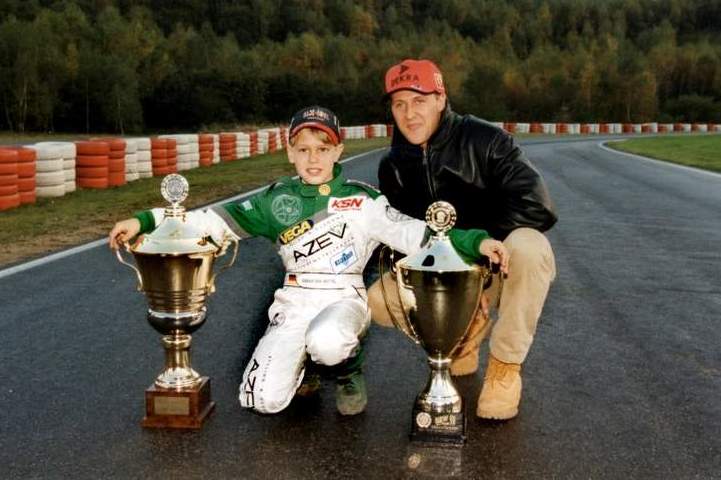 Schumacher’s huge success in F1 inspired a generation of fine race drivers in Germany, Vettel emerging as one of the finest, winning four titles himself and carving his own legacy at the pinnacle of the sport.

However, Hamilton is on the verge of breaking that record, he holds with Schumi because if he beats Red Bull’s Max Verstappen on Sunday night, at the Abu Dhabi Grand Prix, he will claim his eighth title.

This would make him the most successful F1 driver of all time, with 103 pole positions and 103 wins on his record sheet – far more than any other driver in the history of the sport, plus one more title than anyone else.

Speaking to journalists at Yas Marina Circuit ahead of the closest ever F1 title-deciding race ever, Vettel is still backing Schumacher no matter the outcome: “Michael is my hero.

“For that reason, I probably don’t want Lewis to win but the truth is, they have both had a strong season, they are going into the last race with the opportunity to win the championship because they both deserve it.”

“In a way, I’d be happy if Michael’s record still stands but even if Lewis wins, to me Michael is still the greatest. Lewis can win one more, two more, three more, five more championships but it doesn’t change anything for me.

“I get along with Lewis,” added Vettel who had his fair shares of battles with the Mercedes driver, when the German was at red Bull and also at Ferrari but now, at Aston Martin, they don’t race in the same worlds.

“So the gut says I want Max to win just to keep the record alive but my head is clear in terms of letting the best man win,” explained Vettel.

As for the race at the tweaked for speed Yas Marina Circuit, Vettel said: “There’s been significant change to the track, so it will be like going to another new track this weekend.

“We can expect much faster lap-times, and it will be interesting to see the knock-on effect to the tyres and strategy, as well as the changes we’ll need to make to car set-up.

“Once again, we’re aiming to end the season on a high with some good points,” added Vettel who lies 12th in the championship after 21 rounds, his best result second place at the Azerbaijan Grand Prix, in June.