Hamilton: I will wear rainbow helmet in Saudi and UAE 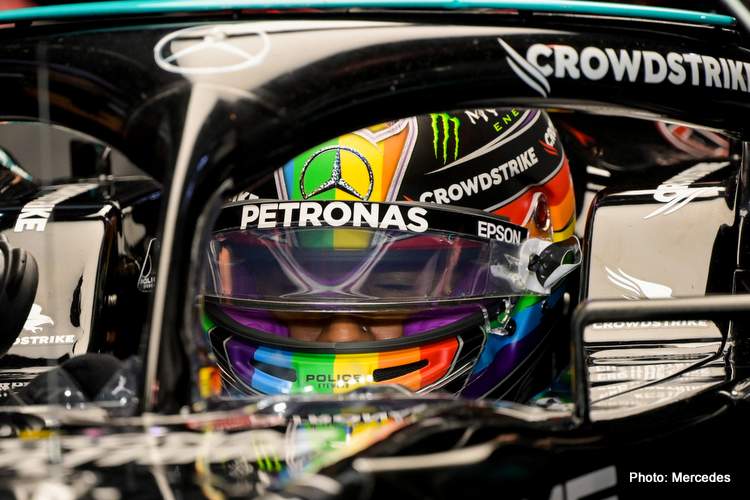 Seven-times Formula 1 world champion Lewis Hamilton will wear his rainbow-coloured Progress Pride helmet at next month’s Saudi Arabian Grand Prix as well as in Qatar this weekend to draw attention to LGBTQ+ intolerance in the region.

The sport’s most successful driver explained his stance after taking pole position for Mercedes in Doha on Saturday. Saudi Arabia and then Abu Dhabi are the final two races of the season.

“I will be using the same helmet through probably the last two races after this, or at least next week also,” the title contender told reporters.

“On the back it says ‘We Stand Together’ and ‘Love is Love’ and it’s important for me to represent that (LGBTQ+) community here as I know there are several situations which aren’t perfect and need to be highlighted.

“But I hope that someone reaches out and I would love to know what is happening here and what they’re doing to help support that community more, the LGBTQ+ community. I wait to hear.”

Gay sex is a criminal offence in Qatar and Saudi Arabia.

Nasser Al Khater, chief executive of the 2022 soccer World Cup that Qatar is hosting, was asked about it at a media round table and said: “Nobody can stop anybody from taking a position publicly or privately if they wish. But it is something that we feel is not fair, and honestly incorrect.

“There’s really not any issue that anybody has to worry about in terms of persecution of any sort. Any sort,” Al Khater added in response to a question about LGBTQ+ fans coming to the country.

Hamilton told Sky Sports television he had been thinking about the location of the last three races and trying to educate himself.

“They are big issues. And I’ve been trying to think what is it I can do? I’m only one person, and I think the sport and all the drivers together and athletes can do more.”

Hamilton, who has used his platform to campaign for diversity and a range of human rights issues, said one of his team members had told him it meant a huge amount.

“I hope that it highlights and sparks conversation, I hope that kids here and whoever is watching are asking what the flag is if they don’t know and why I am wearing it,” he added. (Writing by Alan Baldwin)