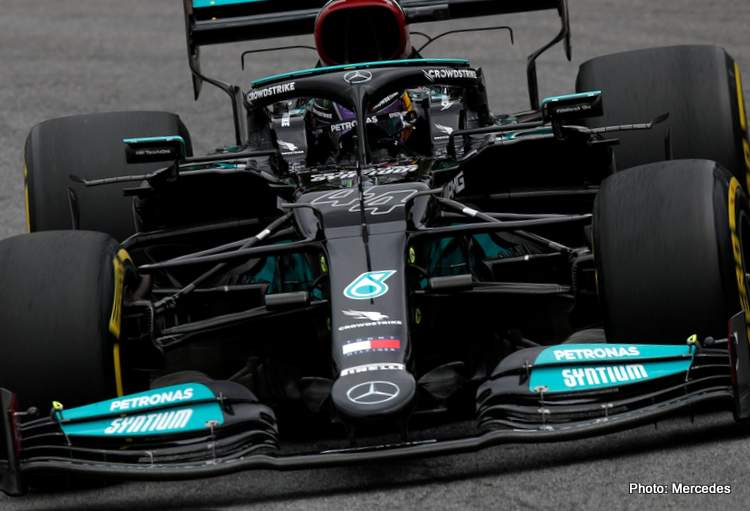 After being absent from last year’s Formula 1 calendar, twenty F1 cars where fired up in anger at Sao Paulo’s Interlagos, for FP1 of the 2021 Brazilian Grand Prix with Mercedes’ Lewis Hamilton fastest.

The major news for the seven-time World Champion, however, was the announcement that he will take an extra Internal Combustion Engine (ICE), earning him a five-place grid penalty on Sunday’s race, thus confirming all the rumors that were circulating in the buildup to this weekend.

Except for the Aston Martin pair, Sebastian Vettel and Lance Stroll who took to the track over 15 minutes into the session, all the other teams were in a hurry to get going, to make use of the one-hour session before they head into qualifying for tomorrow’s sprint race, the last for this season, as F1’1 experiment with a different race weekend format reaches a conclusion.

The session was held in cloudy conditions, with Stroll reporting some drizzles halfway through the session, and Williams’ George Russell reporting that the rain was getting worse minutes later, with the weather forecast showing a chance of rain during the Friday afternoon qualifying session.

Nevertheless, the conditions remained dry enough for the teams to do some proper running, and as a result Hamilton, who started his session complaining about a “poor” front end on his W12, recovered after some setup changes on his car, and got into the groove to finish the session first with a top time of 1:09.050.

His rival Max Verstappen was only good for second, 0.367s off the pace, with Sergio Perez still showing impressive speed to finish the session third and only 0.075s off the Dutchman.

Fourth went to Valtteri Bottas in the other Mercedes who was 0.517s off his teammate’s top time.

Pierre Gasly once again was mingling with the heavy hitters, and ended the session in fifth place albeit 0.830s off the best time.

Ferrari’s Carlos Sainz was sixth on the day, over a second down on the fastest time, with his teammate Charles Leclerc behind him in seventh by 0.018s.

Esteban Ocon was eighth for Alpine a further 0.003s behind Leclerc with his veteran teammate Fernando Alonso ninth in the sister Alpine 0.056s slower than the Frenchman.

Aston Masrtin’s Lance Stroll was tenth 1.302s off the pace, with both McLarens of Lando Norris and Daniel Ricciardo out of the top ten in 15th and 19th respectively. 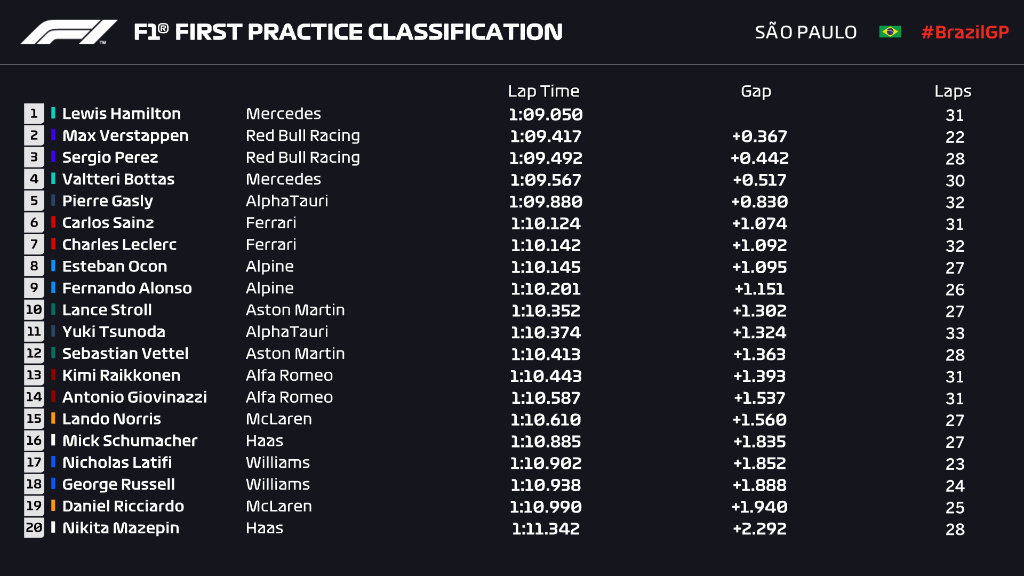