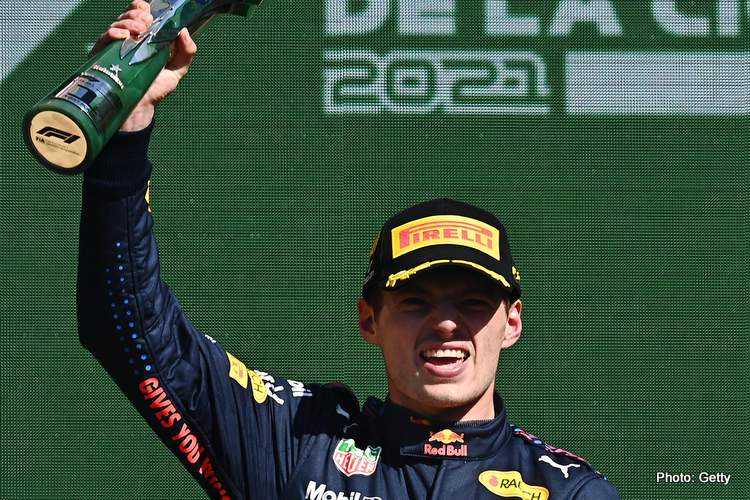 His father was universally known as Jos ‘The Boss’, but Max Verstappen is proving to be the leader of the pack in this year’s Formula 1 Championship, completely in control of his rival Lewis Hamilton whos is being relegated to second best.

Below I have assembled “Best Case Race Pace” for the Mexican GP. I have extracted the best lap of each driver for laps between 6-10, 11-15…….65-71. Laps 1-5 have been ignored due to the safety car on the opening lap. I then averaged those times into one single time to compare the delta between the drivers, ultimately representing each driver’s race pace lap time relationship. 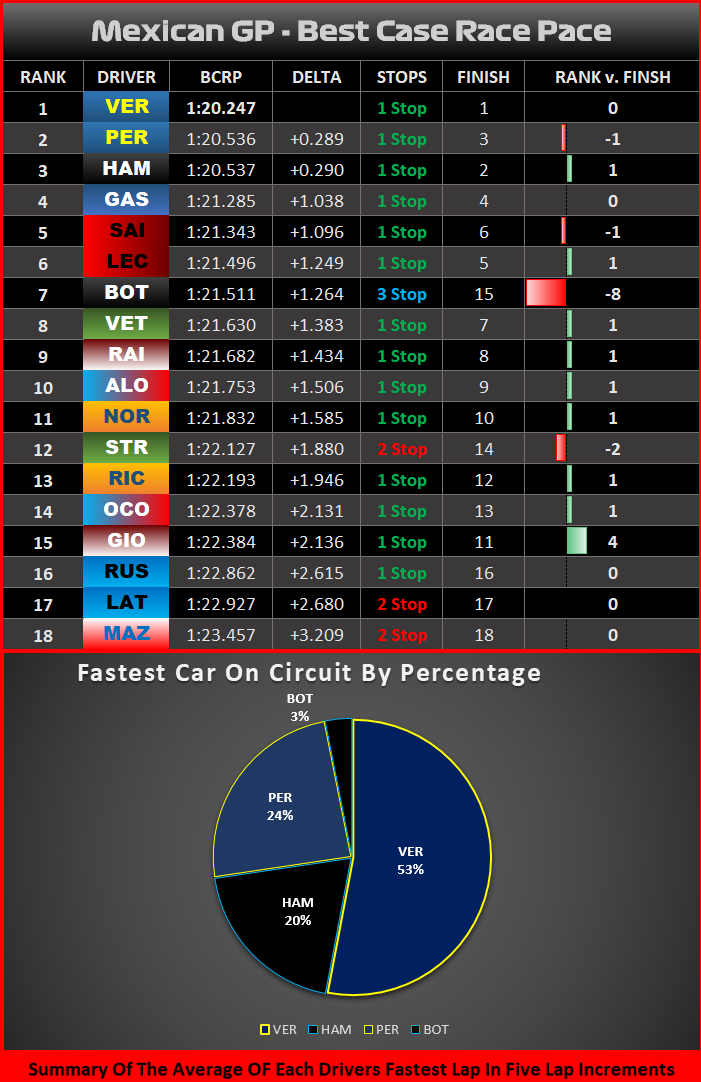 It was no secret heading into the 2021 Mexico City GP that it was Red Bull’s race to lose. The Austrian outfit has a strong foothold on the competition in Mexico which dates back to when Mercedes were far stronger than they are now. You’d have been crazy to bet against them and why would you? Well, a massive free practice pace advantage for Red Bull evaporated in qualifying which quickly sounded alarm bells from the F1 community and fans alike.

As qualifying concluded, a scramble ensued to find an excuse, with any being plausible: cracked rear wing, ‘Tsunoda’ed’, track temperatures, soft tyres don’t work, Mercedes sand bagging again, not to forget the “Red Bull actually wanted to qualify on the second row” story, but none of them held any water.

Nobody wanted to point out the painfully obvious, Red Bull and Verstappen screwed up. Neither Verstappen nor Sergio Perez were able to connect with a competitive lap in Q3, as Yuki Tsunoda just about connected with Perez on the Mexican’s final flying lap.

On Sunday, during Martin Brundle’s grid walk, Helmut Marko suggested that perhaps starting from the second row wasn’t a bad situation to find themselves in, but history showed otherwise. The Mexican GP as it is known today was added to the calendar in 2015, and until this year, not a single driver has managed to lead the race into Turn 1 from the second row of the grid. The idea that Red Bull would purposely blow qualifying is pure fallacy.

Order was restored on Sunday, as Verstappen made quick work of both Mercedes and sailed away to victory. The young Dutchman put a legendary race start launch together forcing his way to the lead and did something no other driver had yet to do, which was to lead the Mexican GP into Turn 1 without a front row start.

It was a jaw-dropping showcase of extreme skill, blended with determination and immediately juxtaposed to Lewis Hamilton airing a grievance about his brakes over the radio to his engineer. As the race unfolded, it became clear how valuable Verstappen’s pass for the lead was, as seen in the Valtteri Bottas and Daniel Ricciardo race long battle.

The Finn was the pole sitter after all and would have, more or less, had the race pace equivalent to that of Hamilton. With five cars surviving to stay on the lead lap by the end of the race, Hamilton appears as nearly two seconds on average faster than Ricciardo per lap, which paints a brutal picture for Mercedes, that Bottas was stuck behind a car that much slower than his own. Perhaps it’s also not such a great look for F1 itself either.

Max managed to put an astounding 0.290s per lap on average between himself and his championship rival throughout the race as Mercedes could formulate no response to the Dutchman’s devastating pace.

Verstappen was the quickest car on the circuit 53% of the race, with Red Bull dominating Sunday’s race pace for 77% of the race duration, when Perez’s efforts are factored in.

All things considered it was an exceptional drive from the Championship leader, surely among his best to date. 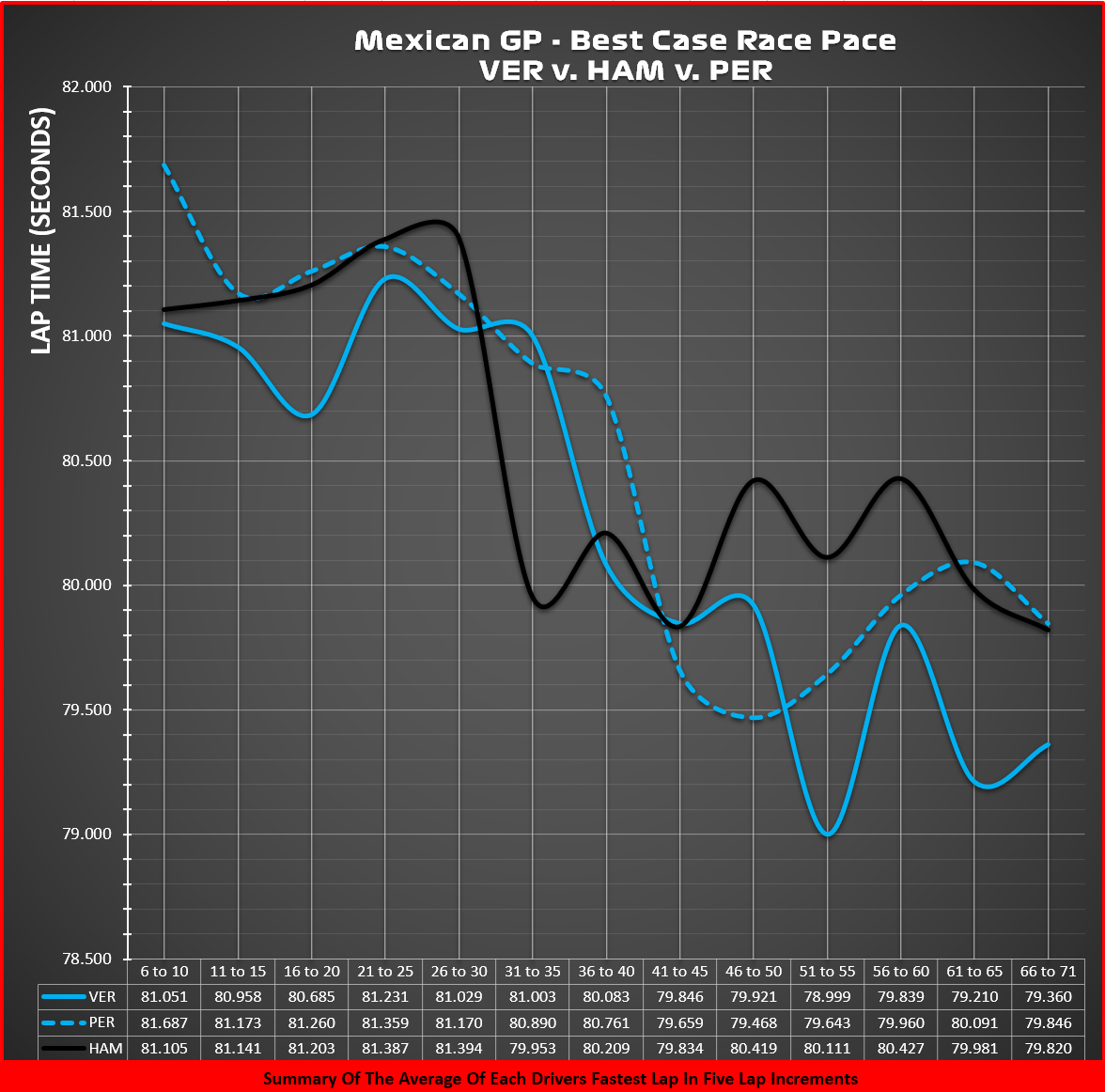 If there’s any consolation for the seven-time F1 World Champion, it’s that the advantage Red Bull had in Mexico should have left him with a third place finish at best. It goes back to the qualifying hiccup where Red Bull left a bit of lemon behind for the Briton to squeeze just enough lemonade and squeak out a second-place finish.

However, in stark contrast, Bottas failing to score points is a far worse scenario for Mercedes to have ultimately found themselves in. Mercedes lead the Constructors’ Championship by a single point as an equally difficult race to Mexico lies ahead in Brazil.

Heading to the Brazilian GP this weekend, there is no reason why Red Bull can’t lock out the front row in qualifying and go on to deliver a 1-2 finish result in the race. Worse yet for Mercedes, a scenario is beginning to emerge that not only sees Verstappen winning the Drivers’ Championship, but it would appear that Mercedes may very well end up losing the Constructors’ battle as well.

The unfinished nature of the upcoming Jeddah Corniche Circuit certainly paints the probability of a low grip and slippery surface. The Losail International Circuit resembles Bahrain with a thinner track width, and Red Bull won the last time out in Abu Dhabi. At face value, nothing looks favourable for Mercedes for rest of the way towards this F1 season’s conclusion.

There are no guarantees, but who cracks next is anybody’s guess. Otherwise, advantage Red Bull. 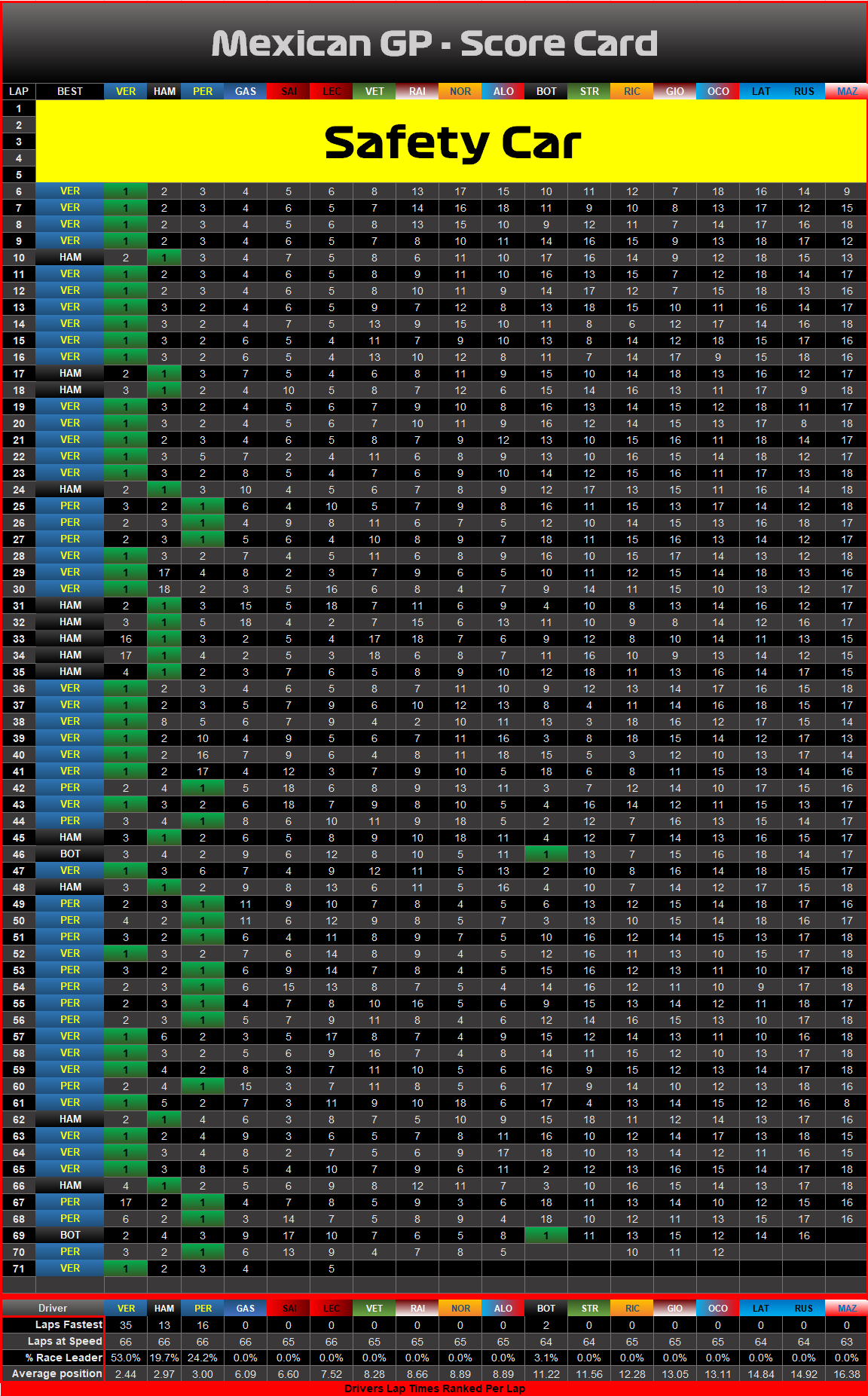