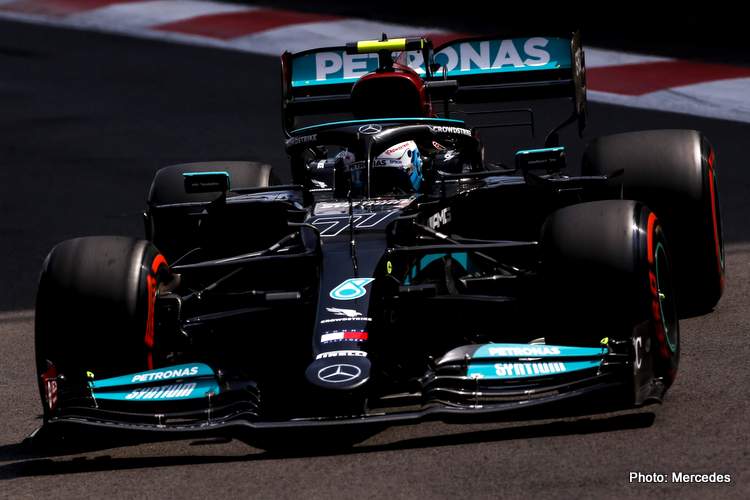 Valtteri Bottas stole the show to claim pole position for the 2021 Mexico City Grand Prix as Mercedes turned on the taps to destroy Red Bull with a front-row lockout, Lewis Hamilton was second fastest.

Red Bull’s Max Verstappen started the session as the favourite but issues with the RB16B’s rear-wing irked the team, doing them no favours, the Dutch ace having to settle for third ahead of teammate Sergio Perez, the local hero who had fans chanting throughout the session.

Lance Stroll crashed early, the Aston Martin driver going wide exiting Peraltada. Although the driver was unhurt, it was a heavy impact that required a lengthy clean-up and repairs to the TecPro supervised by Clerk of the Course Michael Masi before the session resumed.

In the end, the day belonged to Bottas because he delivered one of his best laps ever to take an unexpected pole, gatecrashing the world title fight between Hamilton and Verstappen by simply beating them both. The Finn has found a rich vein of form since his move to Alfa Romeo was announced.

In FP3, a few hours earlier few would have bet against Verstappen taking pole in a battle between the aero magnificence of the Red Bulls against the mighty power of Mercedes. But when it mattered, in Q3, Mercedes came to life and really revealed for the first time this weekend the hand they are holding, and its formidable.

It was a big turnaround, from FP3 to qualy, even by the World Champs, with Bottas too good on the day; he said afterwards: “They were awesome laps, especially my first run in Q3. I couldn’t quite match the same last sector in the second one. But honestly, that first run in Q3 was one of my best laps, it was a good feeling.

“With higher temperatures this afternoon came our way and we tried to optimise everything with tyre temps and set-up. It was a joy to drive,” added Bottas.

Hamilton gave it his best shot but admitted his teammate had something extra when it mattered: “Valtteri did an amazing job. He has been driving so well these last few races. It’s really great for the team. They have been working so hard and we didn’t think we had the pace this weekend. So to lock out the front row is pretty special.

“I really have no idea [what changed]. They were like six tenths ahead at one stage and then four-tenths ahead, but whatever happened once we got to qualifying we had better pace. I’m just as shocked as everyone but we’ll still take it,” declared the World Champion, who will be hunting his third victory at the venue on race day – he won in 2019.

When Bottas went top with his astounding lap in Q3, it dawned on Red Bull they had no chance, even with Perez offering Verstappen a tow during their first runs the gap was over three-tenths of a second.

Adding insult to injury, with Perez leading the second run and Verstappen behind for the tow, the Mexican ahead came upon an errant Yuki Tsunoda in the AlphaTauri, which forced the Red Bull onto the grass.

Verstappen, winner here in 2017 and 2018, was affected by the incident, but spoke of the positives parc ferme afterwards: “It seemed like through qualifying the balance went away a little bit, but actually the last lap I was on for a good lap.

“I don’t know what happened in front of me but there were two guys going off and I thought there was going to be a yellow flag, so I back out and the lap, of course, was destroyed. Even with that and not having a great balance I think we could have still gone for that pole lap.

“Of course third is not amazing but I think it’s still better than starting second. Qualifying didn’t go our way but we’re not using these [soft] tyres so there’s still a lot to fight for,” concluded Verstappen, who leads Hamilton by 12 points ahead of Sunday’s race.

Mercedes lead Red Bull in the 2021 F1 Constructors’ Standings by 23 points after 17 Rounds.

Pierre Gasly made it three Honda-powered drivers in the top five, the AlphaTauri driver having one of his inspired weekends thus far.

The Ferrari versus McLaren battle was as close as ever, with Carlos Sainz edging into sixth despite a problem packed session, which saw him pottering around the track slowly as the systems on his car booted up. They were tense moments until he got going.

Sainz was eight tenths down on the top time, and a mere 0.002 up on McLaren’s Daniel Ricciardo, with Charles Leclerc in the other Ferrari less than a tenth down on his teammate.

Tsunoda was ninth but faces engine-related grid penalties as does Lando Norris who rounded out the top ten, in the McLaren, but will drop down the order too.

Sebastian Vettel was 11th, and the rest were pretty much where expected apart from Alpine whose Hungarian Grand Prix winner Esteban Ocon was only good for 15th while teammate Fernando Alonso did not make it beyond Q1.

Mr Saturday aka George Russell was at it again, planting the Williams 13th, while teammate Nicolas Latifi was only good for 17th, eight tenths down on his teammate in Q1.

Penalties for Stroll, Russell, Ocon, Tsunoda and Norris means they drop down to the back of the grid which will make for an interesting lower midfield battle. 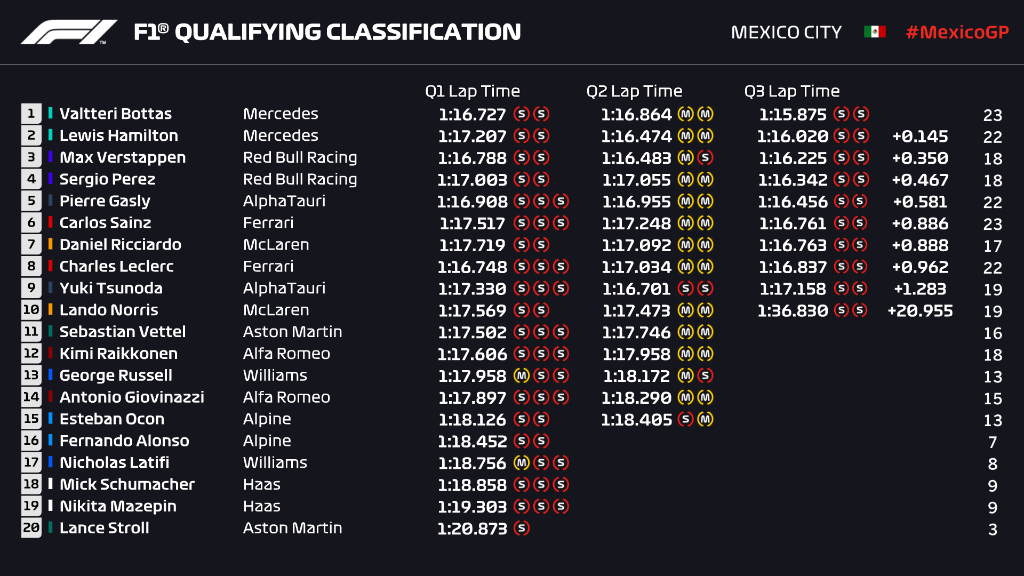 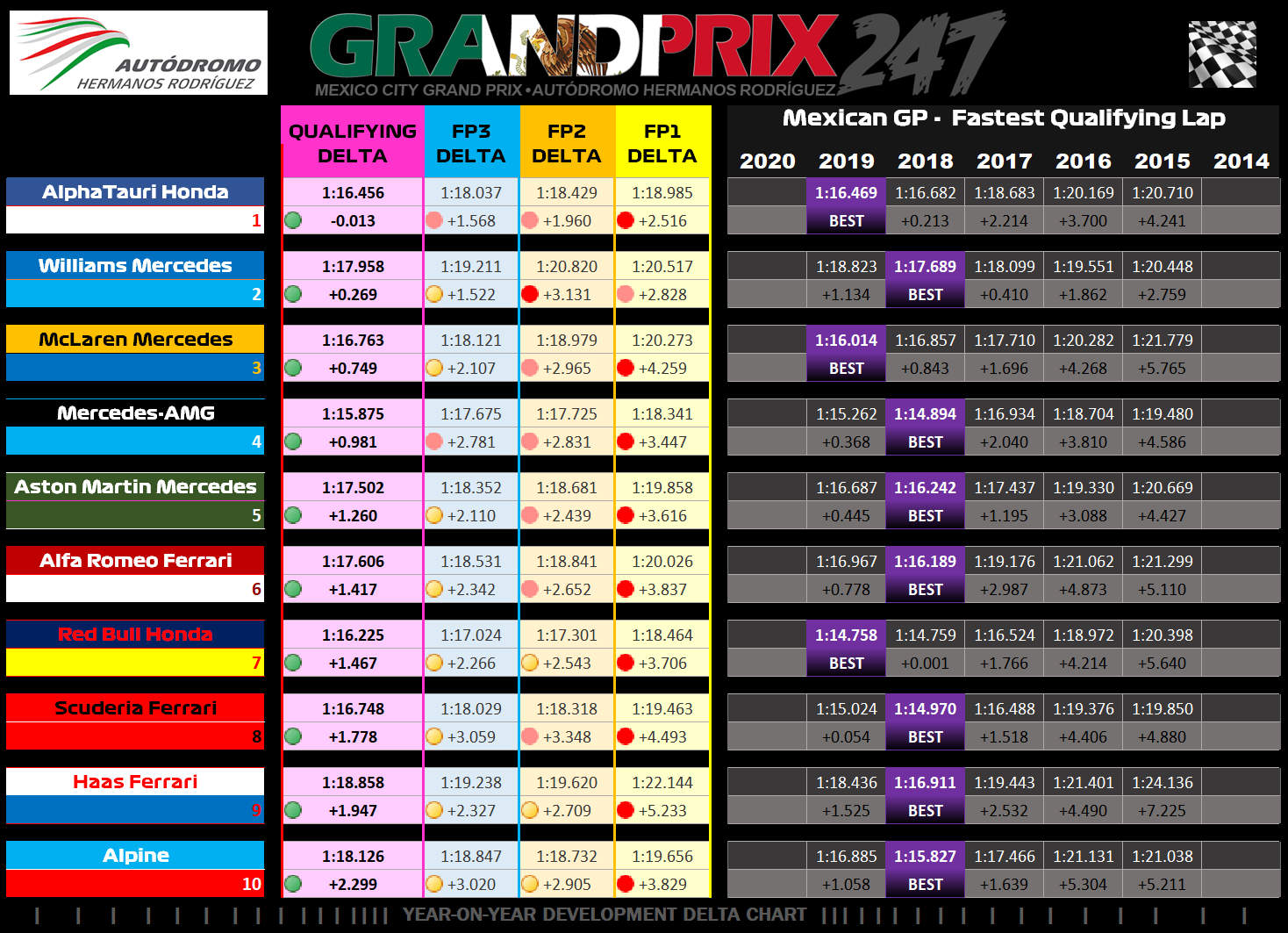 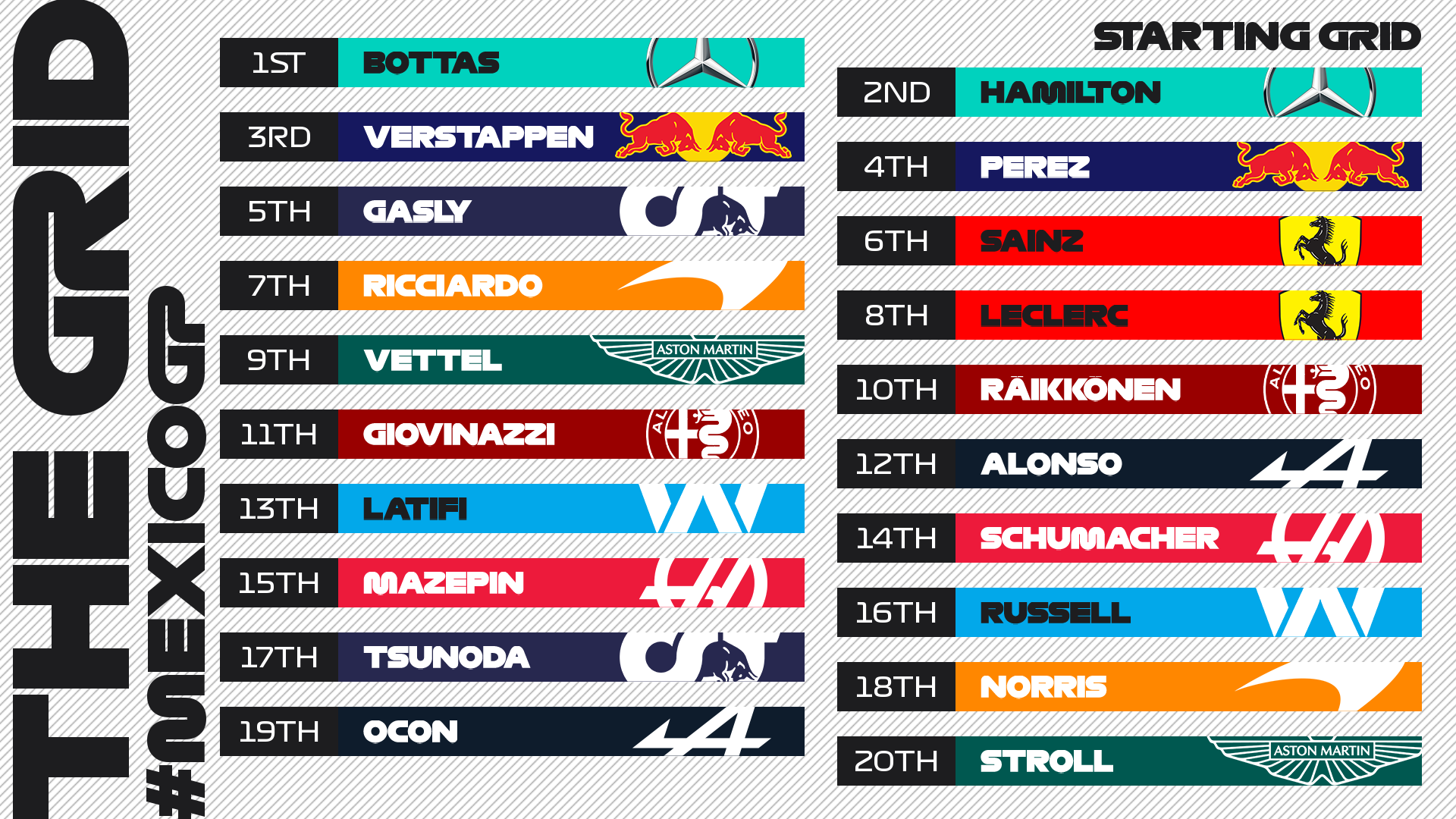