Wolff versus Horner protagonists in an F1 pantomime 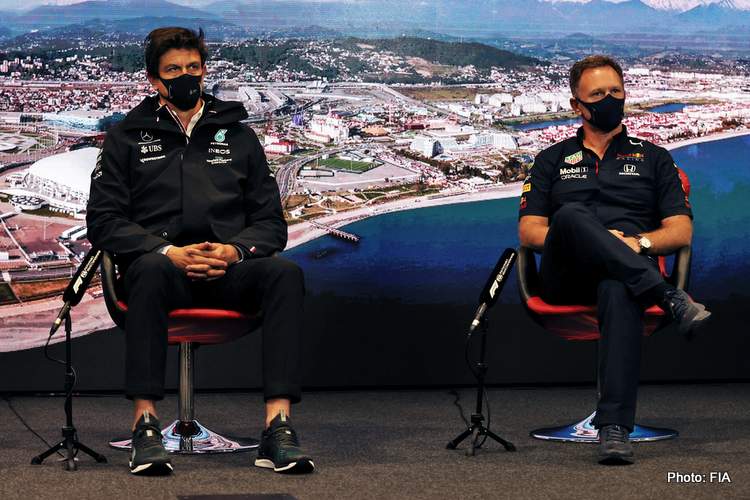 The fat lady has yet to sing when it comes to the outcome of the Formula 1 world title battle but the pantomime actors are already getting a mention – Mercedes and Red Bull team bosses Toto Wolff and Christian Horner.

Both have needled each other all year as Lewis Hamilton and Max Verstappen fight on track, and the approach of the festive season is providing fresh inspiration.

Wolff described Horner as a “protagonist in a pantomime” in an interview with the Daily Mail, referring to some people performing like “little actors, like Hollywood” for the television cameras.

That followed the Austrian calling Horner a “windbag” in June after the Red Bull boss made comments about the Mercedes having a “bendy wing“.

The pair also clashed ahead of the British Grand Prix, where Mercedes’ seven-time world champion Hamilton and Red Bull’s Max Verstappen collided, with Horner labelling Wolff a “control freak” who should keep his mouth shut.

Pantomime, a popular British family entertainment around Christmas with a blend of slapstick musical comedy and topical jokes, usually features a man in drag performing the role of an older “dame”.

“I was quite flattered actually, being called a protagonist,” Horner told reporters at the Mexico City Grand Prix where Verstappen is seeking to extend a 12-point lead over Hamilton with five races remaining.

“I think you also need an antagonist to have a protagonist. One could say that perhaps Toto fulfils that role pretty well – if it were a pantomime then the pantomime dame role might suit him.”

Horner said he took Wolff’s comments with a pinch of salt as part of an all-out battle between teams, drivers and engine manufacturers.

Mercedes have won the last seven drivers’ and constructors’ titles, their unprecedented success following a four-year run by Red Bull. Hamilton is going for a record eighth crown, while Verstappen is chasing his first.

Horner said what happened off track was all noise but could not resist a little dig as he complimented his rival for Mercedes’ achievements.

“I have no issue with Toto. I think he has done a great job there in a team he inherited,” he said, alluding to the fact that Wolff arrived at a team that had won championships with predecessor Ross Brawn.

“Formula One is a competition and as the pressure builds you see people react to pressure in different ways. We are at the business end of that championship now, and you can feel the tension and that will only grow the longer this goes on.

“If Toto wants to make a comment or two, I’m fine with that. It’s pantomime season coming up anyway.” (Reporting by Alan Baldwin)