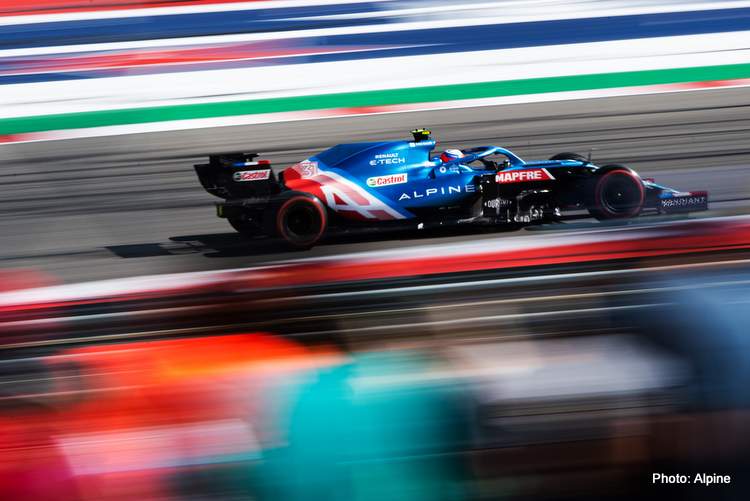 Alpine CEO Laurent Rossi has previously announced that he has a 100-race plan to get his team back to its winning ways, and insists that he will not rush the team’s development plan.

Renault has decided to re-brand its Formula 1 operations as Alpine, the name of their sports car division, and with that came a raft of changes with Cyril Abiteboul departing, and Laurent Rossi joining as CEO, while former Suzuki MotoGP team boss Davide Brivio joined as Sporting Director.

The change that stole the limelight however, was the return of double World Champion Fernando Alonso from retirement to the team where he won his two Championships in 2005 and 2006 when it was known as Renault, with the hope of spearheading the Enstone-based outfit’s new era as Alpine.

The team’s  first season under the new guise has not been spectacular. Aside from the the surprise win of Esteban Ocon in Hungary, which is an outlier due to the special conditions of that race, the team has been fighting in the midfield, and despite some feisty performances from Alonso, the team sits fifth in the Constructors’ Standings, a whopping 146.5 points down on Ferrari in fourth.

Rossi said to Formula 1’s official website after Ocon’s win in Hungary that the team has set a plan for the team to become a frontrunner.

“We have a long-term project, the objective is to reach a level of competitiveness that places us on the podium as many times as possible in 2024,” he said.

“From today in fifth, you can easily find a roadmap. It’s going to be every year a bit better. It’s a 100-race project, four years, four seasons.

“Every race we must make progress,” he went on. “It can be progress you see on the track or progress you don’t see, all the little details.

“The idea is to never stop – and be able to see we’re going in the right direction.

“Next year, it’ll be a coin tossing year,” Rossi said referring to the new aero regulations set to be implemented in 2022.

“All we want is to make sure we have a satisfactory level of performance when we start, which doesn’t put us too far from the top, and then from there, we can carry on our climb to the summit,” he revealed.

But the possibility remains that the start to the new era in 2022 would not meet Alpine’s expectations. If such a scenario materializes, how will the team react? Will there be any knee-jerk reactions?

The French team’s CEO insists that nothing will change when speaking to Autosport, and that the “100-race plan” shall be followed strictly without deviation.

“Wherever we are at the beginning of next year, I won’t deviate from the objective,” he declared.

“We are going to take it race after race, season after season. We won’t change the objective and you’re not going to see me scramble and change the programme just to show a better performance two races after the beginning of the season. We’ll take our time to get where we want.

“We want to avoid the pitfall of building on the short term, which has cost a lot to many teams in the past. We want to be able to build on the long term.”

Rossi claims their approach is the right one to pursue for an F1 team to build the solid foundations of success.

“It’s a radical change of approach to the way we look at F1, and the way we build performance, but it is the way you should do it if you want to perform.

“The top teams today, their results are the fruit of many years of bad results, of being at the bottom of the rankings, of putting stone after stone in place for the new organisation to deliver when it matters. That’s what I want to do,” the 46-year old explained.

Rossi is confident that the top brass at Renault, mainly CEO Luca de Meo are backing him all the way to bring success to Alpine F1.

“The context is actually incredibly favourable because Luca de Meo, first of all, is the architect behind all of this,” he claimed.

“He has a clear vision of what it takes to climb the ladder, and the time it takes to do so. So he’s completely aligned with that plan, the 100-race plan, and the fact that this should take us to the top.”

One of the things Rossi counts on to make his mission of guiding his team back to glory easier, is the implementation of the cost cap.

“A cost cap on the chassis is an incredibly game changing type of factor,” he told Autosport. “Before, you could decide to invest around $200 million over three or four years to get you to where you wanted to be.

“But then suddenly a newcomer could come in and pour $400 million a year, every year. Granted they don’t have the experience or the savviness, but they could catch up quite quickly and it would change the natural order.

“This is over. Now everyone will have to play with the same amount of money on the chassis side,” the Frenchman pointed out.

However, despite being patient before achieving success, Rossi is clear that patience shouldn’t be mistaken for leniency.

“We want to be back on the podium and I want the team to win,” he says. “It’s as simple as that.

“I don’t want us to vie for best of the rest or what have you. We need to aim for victory.

“We need to aim for it, and it’s not out of reach in a cost cap era when you are a works team with 45 years of experience.

“It’s not completely impossible. It’s actually very possible, very reasonable. So that’s what the team has as an objective. I’ve set it for them,” Rossi concluded.