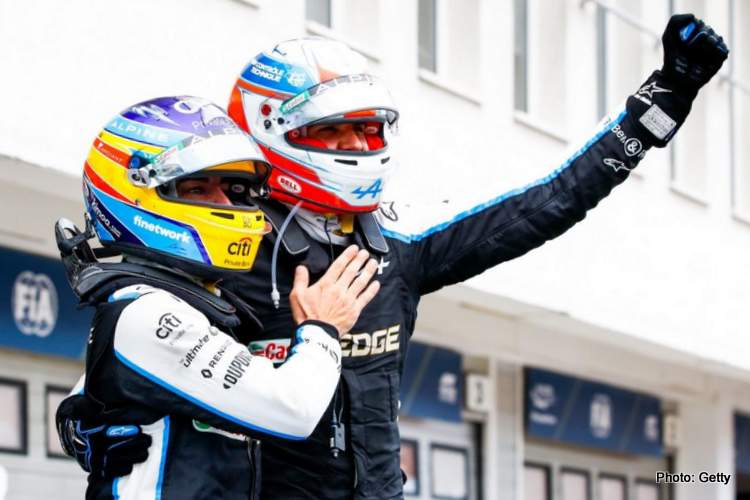 In what is a champagne season, Alpine driver Esteban Ocon won one of the most memorable Formula 1 races in recent years as he powered to victory at a drama packed 2021 Hungarian Grand Prix.

Note: Sebastian Vettel has been disqualified from the Hungarian Grand Prix after it was found that his Aston Martin did not have the required one-litre of fuel in its tank, instead it had 300ml. Report here>>>

The Frenchman scored his first victory in fine style, winning by just over a second after keeping Sebastian Vettel at bay for the whole race, Ocon not putting a foot wrong as he absorbed relentless pressure from the Aston Martin driver.

The gap between the pair was never more than a couple of seconds, often Vettel in DRS range to Ocon. Aston Martin tried the undercut on lap 38 which might have worked had the Aston Martin crew not slipped up, losing the German driver a second or more during the stoppage.

A lap later Alpine pitted their man, and he emerged from the pits in the lead where he stayed until the end, doggedly keeping Vettel at bay to take a well-deserved victory.

Sporting the biggest smile in Hungary, almost drowned out by the wild cheers from fans and his team Ocon said: “What a moment. We’ve had some difficult moments this season but we are back where we belong. Sebastian put me under big pressure but we managed to keep him off, so it’s a great moment.”

Vettel in turn tried his hardest but, in the end, did not have the ammo, and will look at the botched pitstop as the game-changer for him. But on the day he certainly discovered the form that has made him a four-time F1 world champion.

He reported in Parc Ferme: “I’m obviously a little bit disappointed because I felt I was faster for the majority of the race, but he didn’t make a single mistake. I pushed very hard.”

Vettel pits! Ocon continues in the lead, and Alonso moves up to make it an @AlpineF1Team 1-2!#HungarianGP 🇭🇺 #F1 pic.twitter.com/SNEbUd5yRa

Nevertheless, Vettel did well to keep Lewis Hamilton at bay towards the end of the race, the Mercedes driver charging through the field after being the only driver not to pit before the second restart, which put him on the backfoot all afternoon, he did well to recover and claim the final podium spot.

The Mercedes driver might have won the race had he not come up against his former nemesis Fernando Alonso who was hugely impressive as he kept the Merc behind him for a dozen, or so, enthralling laps, the Spaniard costing Hamilton victory on the day and helping teammate Ocon to score a famous victory.

The veteran Spaniard was voted Driver of the Day, and genuinely enjoyed his younger teammate’s great achievement proving that age is no handbrake for him.

An exhausted Hamilton said afterwards: “Firstly I want to congratulate Esteban, he’s been a shining star for such a long time now. It’s been a long time coming and I’m really happy for him. It’s also great to see Aston Martin up there – their best result so far, and I know there’s more to come.

“Today was definitely tough, we always make it difficult for ourselves. It’s crazy to think we were the only ones on the grid at the start but these things happen, and we learn from them. I gave it everything, and I had nothing left at the end.

“I was telling the team how the track was through the lap (before race restart) but they said rain was coming when I got back in the car, so I thought they had other information. I then saw everyone diving in (to the pits)…

“We came in this weekend and didn’t know how it was going to go, and considering the circumstances today I’ll take it,” added Hamilton who now leads the championship again by six points, and Mercedes on top too, by ten points.

Two of the greatest of all time, wheel-to-wheel, lap-after-lap

Hamilton FINALLY gets past Alonso for P4!#HungarianGP 🇭🇺 #F1 pic.twitter.com/v7roMkI0je

Earlier, we headlined the Hungarian Grand Prix preview, when the flag drops the bullshit stops! But it won’t as Valtteri Bottas made a rookie mistake and took out several of the front runners.

One of the most anticipated races of this season, perhaps even decade, was tarnished a couple of hundred meters when Bottas outbraked himself, clattered into the back of Lando Norris’ effect which triggered a domino effect.

Norris clattered into Verstappen, Sergio Perez and Daniel Ricciardo as carnage ensued and put a huge dampener on what promised to be a cracker of a race.

While the chaos took place, Lewis Hamilton made a great start and would have witnessed the carnage in his mirrors, while his title rival Verstappen was compromised and in the thick of things, emerging with a severely damaged barge-board. He would restart 13th.

But with a damaged car he was never a threat to Hamilton, and battled hard with “half a car” to 10th place. With Perez out, this was another huge blow for Red Bull’s title hopes.

The perpetrator of the chaos, Valterri Bottas said over the radio: “I’m sorry, guys. That’s it.”

Later he elaborated: “I had a bad start and I lost the momentum. I misjudged the braking point and locked the wheels. I was responsible in the end for hitting Lando and that meant he cut people off in front of him. It’s not great for me and not great others. It’s not like I did it on purpose.”

The Finn’s lapse of judgement not only ended his race but also ended it on the spot for Leclerc, Stroll and Perez. The five-place grid penalty he gets for Spa is laughable and a slap on the wrist for a driver with so much experience taking out a big chunk of his rivals.

How Leclerc and Stroll dropped out on the opening lap 💥#HungarianGP 🇭🇺 #F1 pic.twitter.com/3jZwAIlw70

While Hamilton retained his lead from the start, with Esteban Ocon and Sebastian Vettel jumping up the field into the podium places as the cars were recalled to the pits as the debris was cleared.

Norris who made a fantastic start was obviously aggrieved and said afterwards: “If I get a penalty for doing for not even doing anything wrong in other tracks, he should deserve a much bigger penalty than what I got.

“We’ll see. I hope they have some common sense and do what they should do, but it’s not up to me at the end of the day,” added the McLaren driver.

When the race restarted, all eyes were on the Verstappen versus Hamilton battle, but it soon became clear that the Red Bull was crippled while the Mercedes driver was the only one not to dive into the pits to ditch the inters for slicks.

He did so the next lap, but by then the rest of the pack were ahead of him triggering damage limitation. Nevertheless, the seven-time F1 world champion started a mega-chase, he was the first driver to pit on lap 20 for the undercut as Red Bull pulled Verstappen in for a stop as did McLaren for Daniel Ricciardo.

The pair emerged from the pits on lap 21, at which point Hamilton went past as they exited the pits into ninth, with Verstappen 11th with Ricciardo between him and his title rival.

The damaged bargeboard on the Red Bull doing its driver no favours hampering any chances of making a race of it allowing Hamilton to pull away at about one second per lap, that contest over thanks to the damage suffered by the Red Bull on the first lap.

The Red Bull driver summed up his disappointing day: “I was missing the whole side of my car. And the floor was damaged as well, so almost impossible to drive, to be honest. I still tried my very best and I still got one point. It’s at least something – but it’s not what you want.

“These moments, it doesn’t do anything, it’s just disappointing. I know that when we go again after the break, I will be there again and I will try my very best. Of course, I hope my car is going to be competitive – but we’ll find out,” added Verstappen who finished tenth.

At the front, Ocon had not put a foot wrong, with Vettel relentlessly chasing, but the Alpine driver unperturbed had a two seconds lead at this point, with Sainz in third was taking chunks of time out of Vettel, with Alonso large in the Ferrari driver’s mirrors.

When Ferrari pitted their man, he emerged a couple of seconds over Hamilton but with fresher tyres the red car was able to keep the black one at bay then, but not so later in the race when Hamilton nipped past late on to deny Sainz a podium.

While the two Red Bulls suffered, it was a strong day for AlphaTauri with Pierre Gasly and Yuki Tsunoda in sixth and seventh respectively. Gasly powering from the back after avoiding the first lap melee and going on to set the fastest lap and an extra point.

Behind them, Williams enjoyed one of their best days in ages, with Nicolas Latifi eighth, his first points in F1, and George Russell ninth. 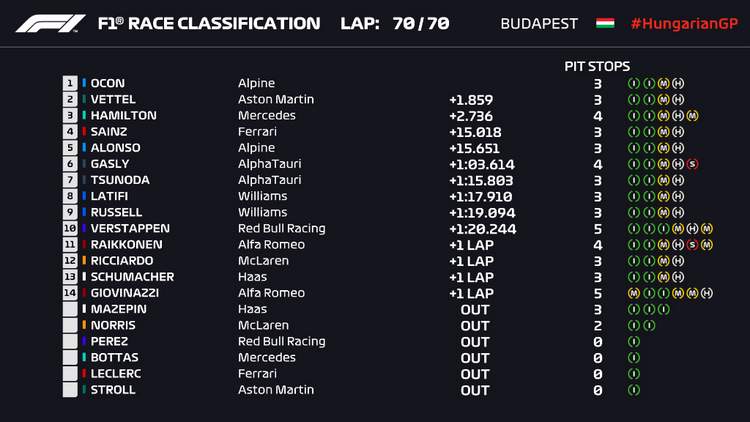 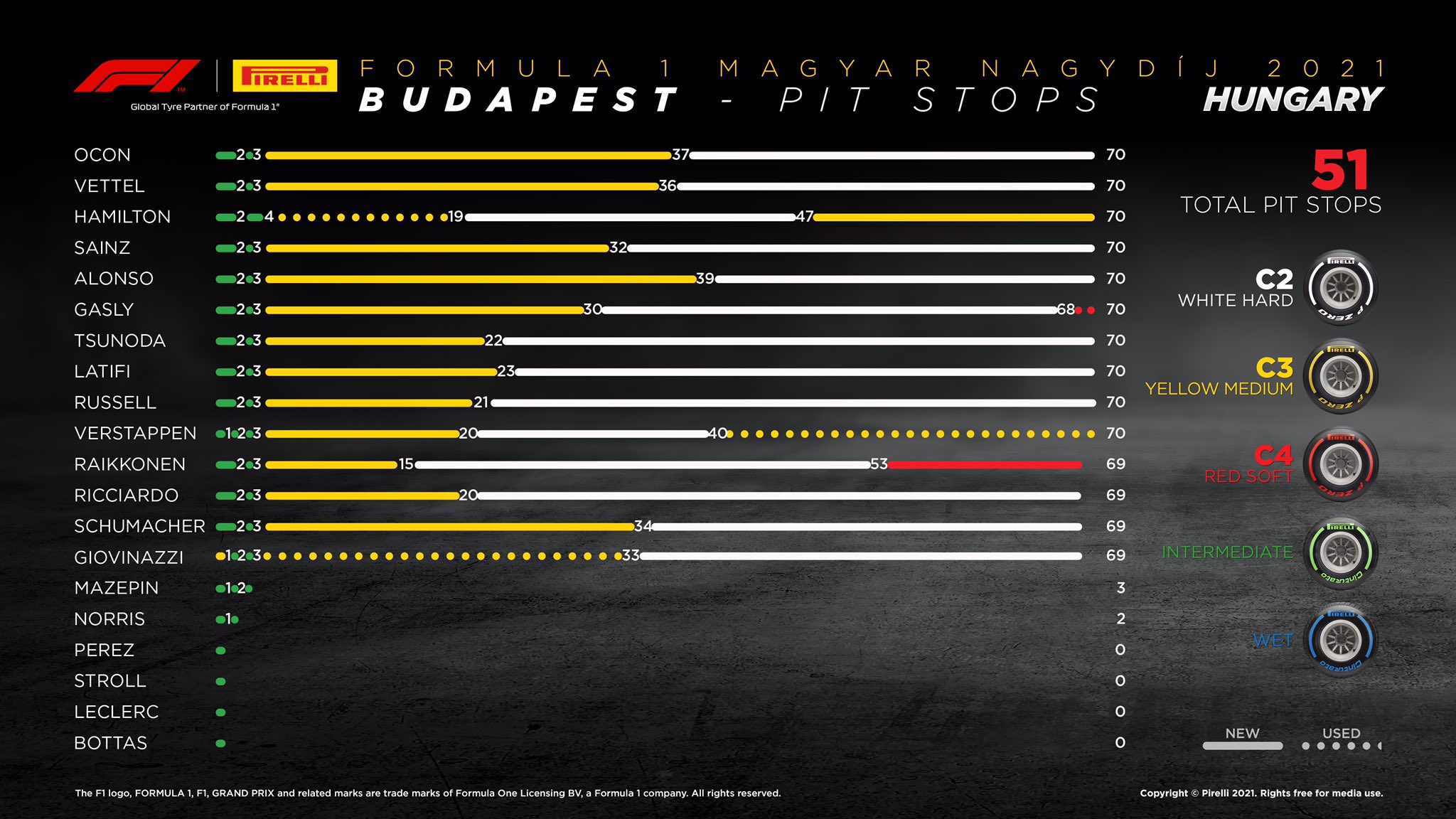 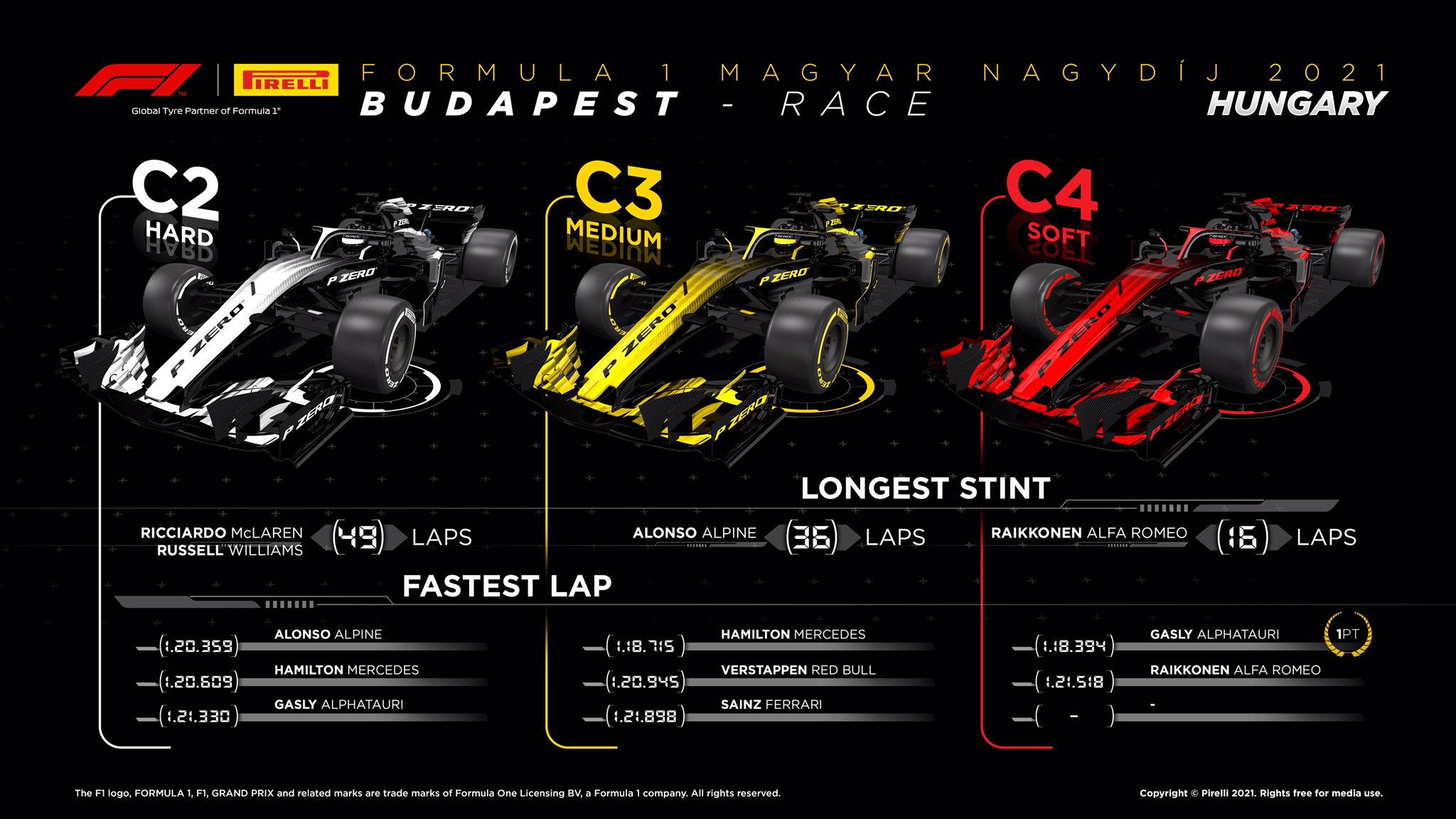 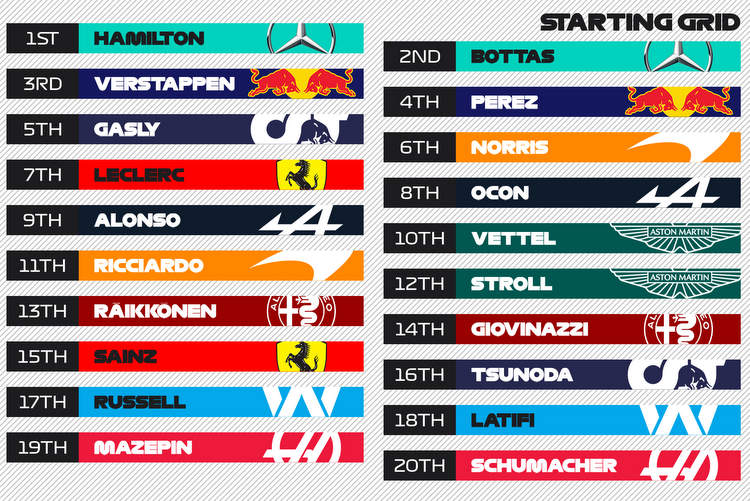