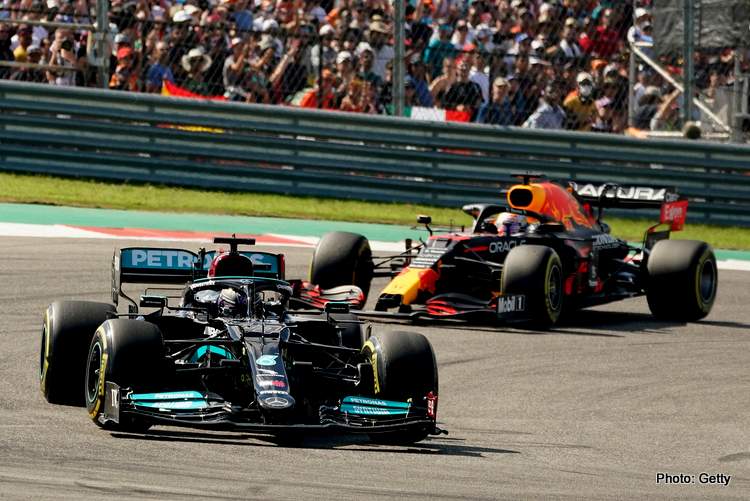 After a year away from Austin, Formula 1 made a welcome return to the Circuit of the Americas for the United States Grand Prix with the Drivers’ Championship heating up.

And with Turn 1 action, strategic chess games, and epic midfield battles along the way, it was a great spectacle in the heat of Texas, as we should all come to expect by now. So here we go with my drivers’ ratings from the 2021 United States Grand Prix.

Champion’s drive from the Dutchman.

Pole position started the weekend in style before an average start left him P2, finishing the first lap of the race. An aggressive early pit-stop and strategic thinking using teammate Sergio Perez to hinder Lewis Hamilton worked in his favour, leaving him ahead in track position after both pit-stops.

Throughout all of this, his driving was utterly breath-taking. Towards the end it looked like Hamilton on fresher hard tyres would breeze past Verstappen, but he left just enough performance in the tyres to keep the seven-time World Champion at bay to secure first place, extending his Championship lead to 12 points.

He will feel disappointed not to have won that race, but Lewis Hamilton must feel proud of his efforts in Austin.

A super start and overtake up the inside in Turn 1 allowed him to take P1 away from his Championship rival, however the Mercedes package just didn’t have the race pace to extend the gap between himself and Verstappen.

Strategy decisions didn’t go his way and he wasn’t aided with a teammate nearby, as Bottas took the grid-penalty, but he managed his tyres brilliantly to stay sufficiently near to Verstappen, but it ultimately wasn’t enough as a mistake at Turn 11 towards the end all but ended his chances of the top step on the podium.

Considering Perez didn’t have a drink after the first lap in the Texas heat, a podium was very much deserved.

A solid qualifying set him up well for Sunday, and his start was good enough to keep him in the top three. Initial pace staying close to the front two drivers was impressive, but he ultimately dropped off and settled in a steady pace keeping third place secure.

Speaking after the race, Perez spoke about muscle fatigue and tiredness due to no drink as soon as Lap 20, so with this in mind his drive to secure the podium was truly impressive.

We’ve barely seen Charles Leclerc on the broadcast, but don’t let that take anything away from how good a drive it was from the Ferrari man.

Compared to his teammate and rival drivers Norris and Ricciardo at McLaren, Leclerc was on another level this weekend. He easily out-qualified them and went on to steam ahead in the race and complete a lonely but impressive P4.

Anyone else absolutely gutted they won’t see Ricciardo absolutely vibing in Austin for another 12 months? Yeah, me too.

Stronger of the two McLarens throughout the weekend which is something we haven’t seen much this year, but shows the steady improvement the Australian has had this second half of the season.

His battle with Sainz was nostalgic of great McLaren and Ferrari battles from the past, as he passed the Spaniard with a glorious move before holding him off.

Mercedes really could have done with Bottas fighting up the grid to try and help his teammate being hunted by the Red Bull pair, but unfortunately that wasn’t the case.

A slow start saw Bottas a pit-stop behind the leaders within just a few laps as he dropped to P10, basically all but ending his chances of having any significant impact in the race out front.

He gained a few places towards the end due to strategy and decent signs of pace, but it was overall a very lackluster weekend for the Finn.

A weekend of frustration I feel for Carlos Sainz.

Starting on the softs was never going to be easy given the degradation of the tyres around Austin, but he did well to fend off Norris whilst failing to do the same with Ricciardo.

However as we’ve seen a lot recently, his luck with pit-stops let him down massively. And with contact battling with Ricciardo towards the final stages damaging his front-wing, he had to concede a place to Bottas and finish P7.

With better luck in the pits and a clean battle with Ricciardo, it could have proved a much happier weekend.

Bang average weekend for the Brit in America.

As we usually see him taking the battle to the Ferrari boys and those ahead, it was strange to see Norris struggle so much this weekend.

Having been slower than Ricciardo on Saturday and Sunday, he wasn’t able to make up ground on race day and had to settle for a poor weekend given his results and performances throughout the season.

A Q3 appearance on Saturday was matched with an excellent start on Sunday, as he maintained a Top 10 finish throughout the race duration.

Wheel-to-wheel racing was great with brilliant moves on Stroll and did enormously well whilst being in battle with the most experienced and knowledgeable drivers on the grid. A solid weekend for the rookie.

P18 to a points finish in a mediocre Aston Martin package, that’ll do!

Starting at the back due to engine penalty, he made up places quick off the start and continued this run of overtaking throughout the race, using his fresh tyres earned by going long and maintaining a good pace in both stints.

He also inspired Aston Martin fans to keep the Grandstands clean post-race, to which they acknowledged and did exactly that. Well done to that man.

Tale of two days for Giovinazzi once again.

A strong Saturday showing of P13 was improved with a few places gained at the start but was soon passed by Raikkonen and battling Alonso.

This battle was epic and showed he can more than hold his own against some of the very best drivers on the grid, however did have to give the place up having gone off-track.

If his race pace can live up to his one-lap qualifying pace, he could have some stellar results if he’s with Alfa Romeo next season.

One to forget for Stroll on his somewhat home Grand Prix this year.

Saturday started with a shocker as he exited in Q1.

Then a spin on the opening lap after making contact with fellow Canadian Nicholas Latifi dropped him down the order, which he just couldn’t come back from.

A spin like Stroll also ruined the race for the Iceman this time around.

A solid start and race pace to battle Alonso and Tsunoda in quicker cars showed his class, but a mistake defending from Vettel whilst in P10 ended all hopes of what would have been a well-earned point.

It was always going to be a tough one for Russell this weekend.

Starting at the back of the grid would have required some masterclass for Russell to gain anything from race day, and that never looked like coming to fruition after his lackluster race pace halted any hopes after the opening laps.

An opening lap collision with Stroll forced a first lap pit-stop, where he had to make up ground to catch the rest of the field, catching and passing both Haas drivers, which was all that was really achievable.

Faster than Mazepin on Saturday and Sunday, whilst managing to keep up with the quicker Williams of Latifi for a while. Not really more that could be done.

Enjoyed his fried chicken though which is nice to hear!

Finished miles behind Schumacher, but a loose headrest didn’t help his cause as he also had to pit on the first lap. Race pace was nowhere near at it though.

Engine penalty forced him to start at the back of the grid, but this didn’t stop him racing wheel-to-wheel and being in the points before retiring.

Given him an extra half-point for being so comical over the team radio when battling with the Alfa Romeos. Just loves to make the stewards life hard does Alonso.

Race ruined early due to front-wing damage, didn’t have the pace to catch up to the midfield and ultimately retired. Weekend to forget for Alpine.

Bumps in the circuit ended his race after just a few laps due to suspension issues. Such a shame as I love seeing Gasly on a race day. 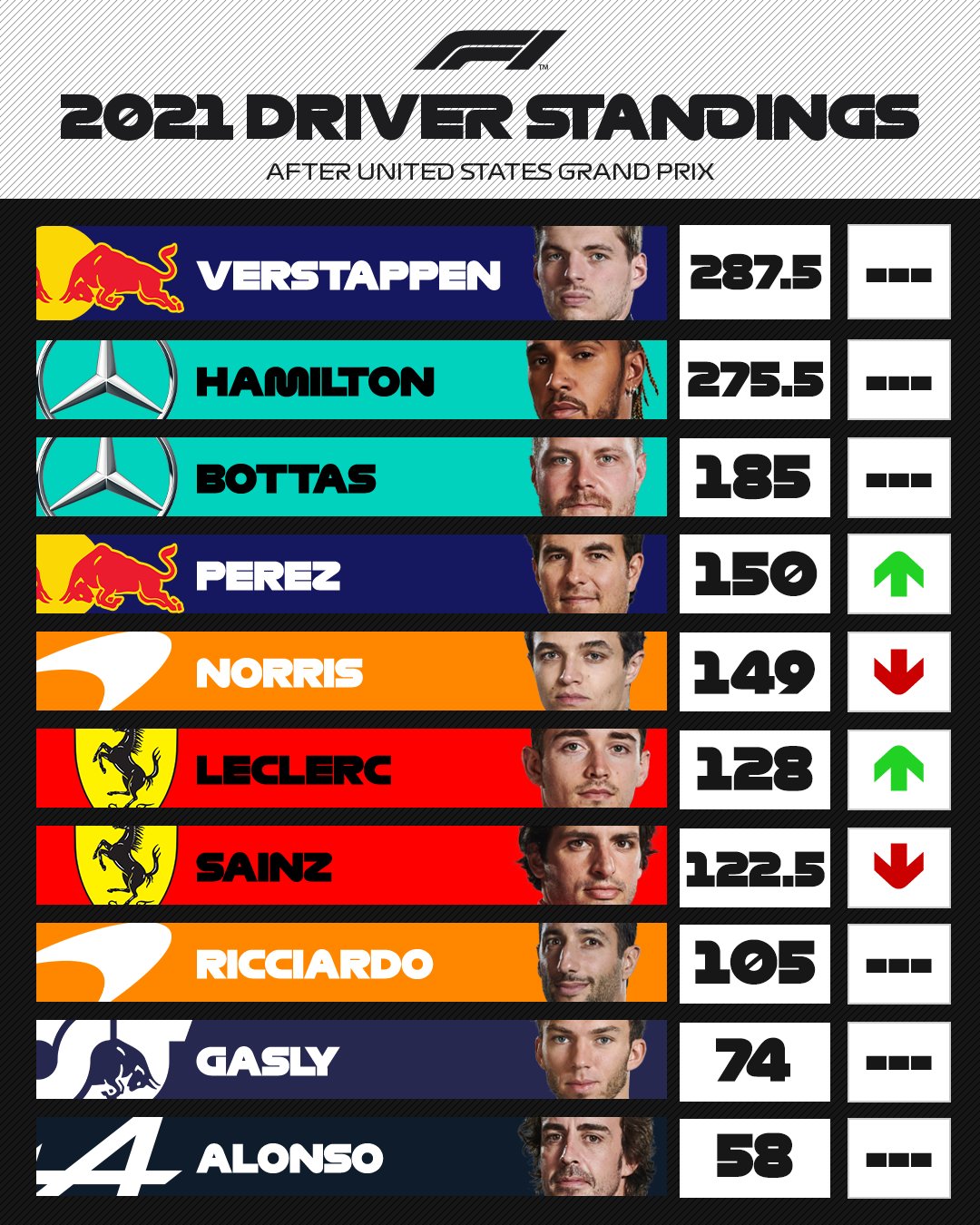 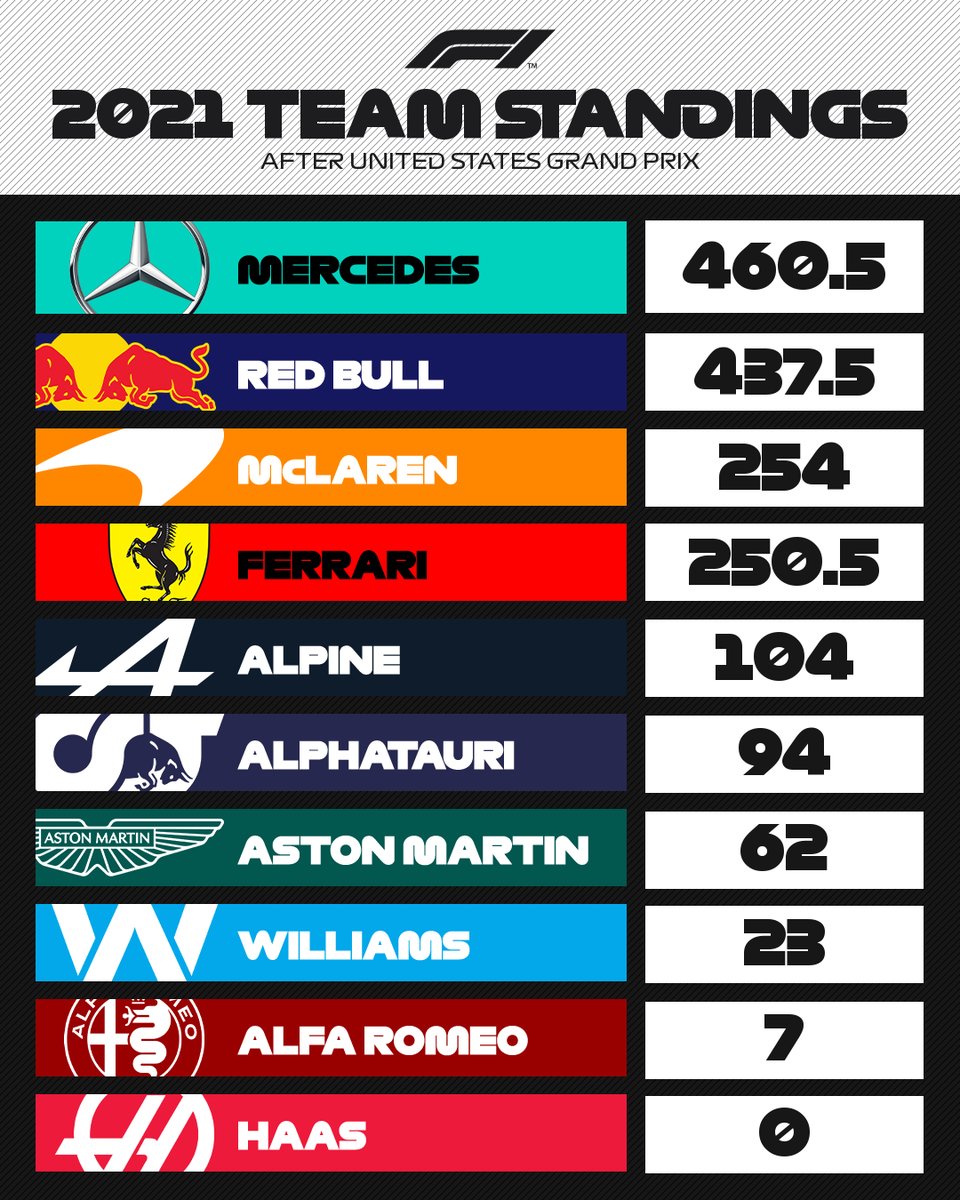