Bottas: Not the strongest weekend for us 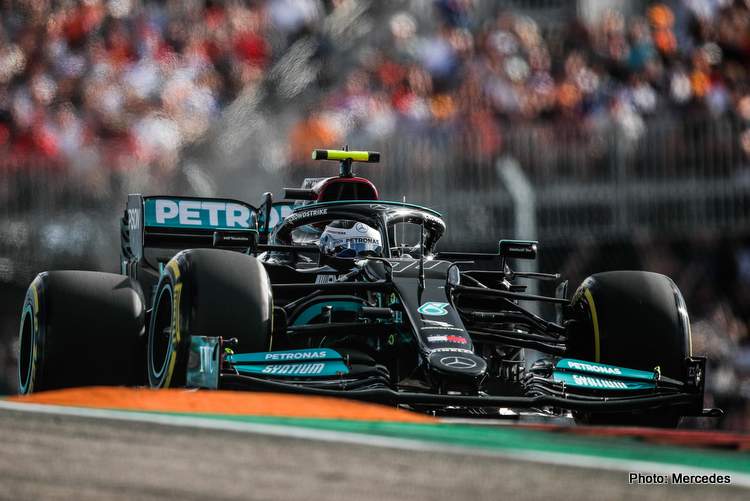 Valtteri Bottas could not repeat his Turkish form at the 2021 United States Grand Prix. Having an engine related grid penalty didn’t help, but the Finn admitted it was not the strongest weekend for him and his team.

Bottas entered Sunday’s race in Austin on the back foot, after his team opted to give him a new Internal Combustion Engine (ICE) – his sixth this season – amid rising reliability concerns for the once benchmark power units of the Turbo-Hybrid era.

He couldn’t qualify higher than fourth behind the on-form Sergio Perez, and started the race ninth, where he couldn’t make any impression whatsoever, something the Finn acknowledged in his team’s post-race media brief.

“It was a pretty uneventful race for me, we tried the best we could, but it wasn’t easy to fight through the field,” he said.

“Making progress was difficult and we knew it would be, because of the temperatures here and the characteristics of the track.

“In the first stint I got stuck behind the Alpha Tauri’s and that cost me quite a lot of time. Once I was behind slower cars, the pace difference wasn’t quite big enough to make passes easily,” Bottas explained.

“There weren’t any Safety Cars or other situations for us to make the most of, but with the grid penalty and where we started, I’m not sure what more we could have done,” he lamented.

“Not the strongest weekend for us, but in free air the car felt good and there are plenty of learnings we can take forward as a team,” the Alfa Romeo-bound driver concluded.

His team boss Toto Wolff also aired his frustration of the team’s disappointing weekend, and the team wingman’s struggles and said: “For Valtteri, he also struggled with overtaking and moving through the field, but we used the longer stints to make up some places and he put in a strong move on Sainz on the penultimate lap to take sixth.

“It’s not the weekend we hoped for, but we know there are still many opportunities to come. We are right there, we are in the fight and we’re enjoying the battle. So, let’s see what the next one brings,” the Austrian concluded.

Bottas still lies third in the Formula 1 Drivers’ Championship, 35 points ahead of Red Bull’s Sergio Perez. His result and Lewis Hamilton’s second place, mean that Red Bull outscored Mercedes by 13 points, thus reducing the gap between them to 23 points in the reigning champions’ favor, with five races remaining.

Tough race today, ended up 6th from 9th on the grid. Tried all I could. Thanks for the amazing crowd and support throughout the weekend 🙏#VB77 #F1 #USGP@MercedesAMGF1 pic.twitter.com/lwC9h98lRV