Hamilton: I hope we make it through turn one… 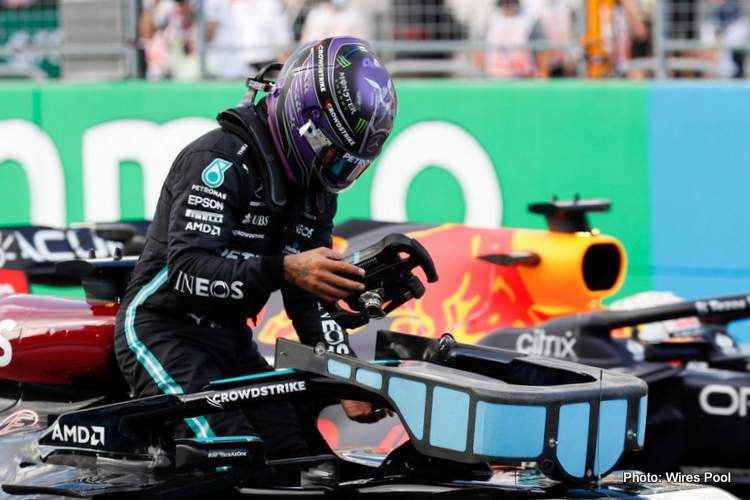 Mercedes driver Lewis Hamilton hopes he will make it through the opening corner of the 2021 United States Grand Prix in one piece as he lines up beside world title rival Max Verstappen on the front row of the grid today.

Red Bull’s Verstappen will have the advantage of starting from pole position after he beat his Mercedes rival to top spot by two tenths at a packed and sizzling Circuit of Americas in Austin.

Hamilton and Verstappen have already collided on two occasions this season – at Silverstone and Monza – and Turn 1, at COTA, is arguably one of the trickest first corners on the Formula 1 calendar with mayhem possible (even expected) as 20 of the world’s fastest cars power off the start line, with the two title contenders at the head of the field.

“I hope we make it through turn one and we get a good race,” said Hamilton during the post-qualifying press conference. “It is all fun and games. We are going to have fun, and give it everything as you would expect. It is no real difference to any other part of the season.”

Meanwhile, Verstappen, sitting to Hamilton’s left during the press conference, appeared to take umbrage with the line of questioning.

“I don’t see why we have to keep bringing this up,” the 24-year-old said. “It is not like we are the only ones who have touched in this sport.

“These things happen, unfortunately. But we are on the front row again and everyone is just expecting a great race and as drivers, that is what we expect, too. We will be professional,” insisted the Dutch ace.

Hamilton’s ferocious title battle with Verstappen was granted extra spice here on Friday, when they clashed in second practice.

Verstappen ran wide through the exit of the final corner before going wheel-to-wheel with Hamilton at 180mph on the uphill drag to the first turn.

Verstappen eventually conceded position to Hamilton before raising his middle finger in his rival’s direction and calling him a “stupid idiot”.

Commenting on the flashpoint, Hamilton added: “I didn’t run him wide. He decided to go round the outside and ended up going wide because we were battling into the last corner. It was a silly thing [to do].”

The Circuit of the Americas has been a happy stomping ground for Hamilton and Mercedes in the past.

Hamilton secured his third and sixth world titles here in 2015 and 2019 respectively, and has triumphed in Austin in five of his eight outings. A Mercedes car has started from pole at every race since 2014.

But Hamilton, six points behind Verstappen in his quest for a record-breaking eighth title, had no answer as the Dutchman romped to his 12th pole.

“Sorry, guys,” said Hamilton over the radio after he finished 0.209 sec adrift of Verstappen.

However, the Briton, who was fourth after the first runs in Q3, will take some comfort from splitting the two Red Bulls, with Sergio Perez third.

Charles Leclerc will start fourth ahead of Ferrari team-mate Carlos Sainz, while Lando Norris will be promoted to seventh following Valtteri Bottas’ punishment. The Finn took fourth, but is demoted to ninth after taking on his sixth engine of the season.

F1’s return to the United States – after last year’s race was scrapped because of the pandemic – has been greeted with spectacular enthusiasm.

A bumper crowd of 120,000 watched qualifying, while 140,000 are expected for Sunday’s race while TV viewing figures mya be the highest ever for a Grand Prix in the States.

Miami will be added to the calendar next season with a third race on American soil – understood to be in Las Vegas – expected for 2023.

We’re set up for a blockbuster race, we can’t wait!#USGP 🇺🇸 #F1 pic.twitter.com/W4TWfkVKK3