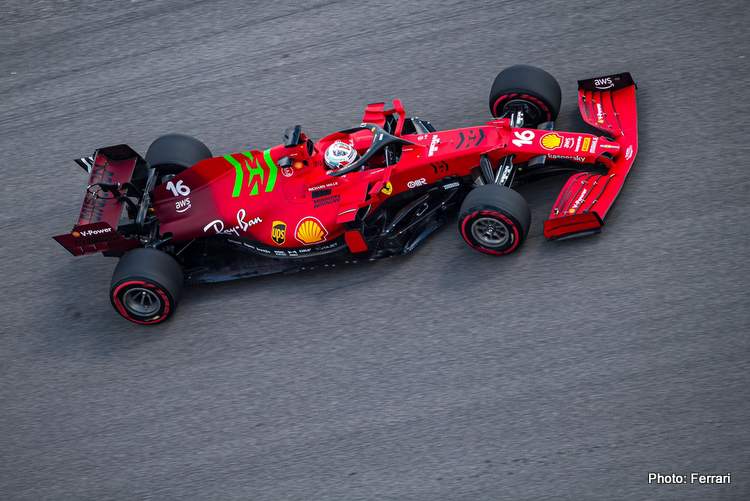 Charles Leclerc’s trip to Austin was not straight forward, and it seems his race weekend won’t be as well, as he deals with overheating tyres, and bumps making the track “particularly treacherous”.

With Formula 1 commencing its activities in Austin for the 2021 United States Grand Prix, Leclerc was fourth and seventh for Ferrari in FP1 and FP2 respectively, under the watchful eyes of team boss Mattia Binotto who was back at the Ferrari pit wall after skipping the Turkish Grand Prix.

“It’s great to be back in the United States!” Leclerc said in his team’s press release. “The atmosphere here is always so special, both on the track and in Austin, in the heart of the city.

“Everyone is very friendly and enthusiastic and I was pleased to see so many fans already in the stands, many of whom were our supporters with their Ferrari flags,” he continued.

Going into business, Leclerc said: “As for today’s work, we have completed the planned program, trying different solutions. The most challenging aspect are the bumps which make the track particularly treacherous.

“With the high temperatures we are experiencing, tire management becomes a key factor, because they tend to overheat, especially in the third sector,” the Monegasque explained, echoing what other drivers have highlighted regarding the tyres’ performance.

“This is why we need to find the right compromise between pushing too hard in the first section, but paying the duty in the last, and saving the tires at the beginning to have them fresher and being able to force in the final lap.

“In tomorrow’s third free practice session we still have to work to find the best balance before qualifying,” the Ferrari charger revealed.

Leclerc’s teammate Carlos Sainz seems to be enjoying the “fantastic” Circuit of the Americas despite its bumpy surface.

“How nice to be in Austin again!” he said. “The track is fantastic as always, and it has been from the very first moment.

“It is a beautiful circuit and very pleasant to drive,” Sainz went on. “The asphalt has gotten bumpier over the years, but I think this is now a feature of the circuit and is a challenge for both cars and drivers.”

The Spaniard was fifth in FP1, ninth in FP2, but was nevertheless confident of his pace, as he suffered from traffic on his flying lap.

“Today we tried different set-ups and we improved a bit from the first to the second session,” he explained. “Overall, I am happy with our Friday and the pace is promising considering I found traffic in sector 3 on my fastest lap and was unable to complete a lap that would have otherwise been very good.

“The temperatures on the track today were very high, which obviously had an effect on the long runs, where degradation on the Soft compound manifested itself quickly.

“This can make things difficult on Sunday,” Sainz predicted, “so it is a factor that must be taken into great consideration.”

Both Ferrari drivers have their work cut out to put their team ahead of McLaren in the constructors’ championship. Third in the teams’ standings is a target that has recently become quite achievable due to the recent strong run of results by the Scuderia and its drivers.

As a result Ferrari’s gap to the Woking-based team has closed down to only 7.5 points with 6 races remaining this season.