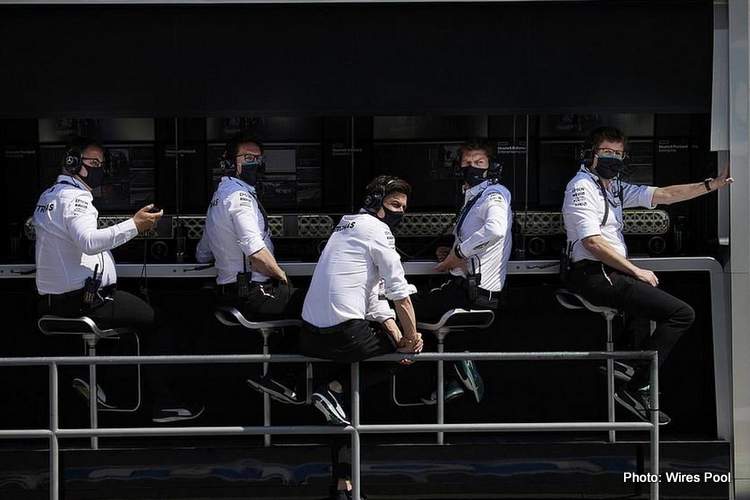 Toto Wolff was left counting Mercedes’ losses after the 2021 Turkish Grand Prix, concluding things could have been far worse but insisting the world title fight, between Lewis Hamilton and Max Verstappen, remains a wide-open contest.

Much has been said after a dull but intriguing race at Istanbul Park in tricky wet conditions all afternoon. Nevertheless, rain master Hamilton stormed from P11 on the grid (thanks to a ten-place grid drop engine penalty) to third place with a dozen laps to go.

Thereafter a great debate was triggered, as the World Champ reluctantly pitted when he felt he had a shot at taking the car home on intermediates, which had transformed into ‘interslicks’ and were fast losing pace, as the race progressed and started to go to the drivers that opted to stop earlier.

Should Hamilton have stopped? That is the big question Mercedes faced during the crucial late stages of the race. But the serial Champs took the safe route by pitting Hamilton neglecting to take a gamble on third which might have been on the cards for the 100-time Grand Prix winner.

Notably, Pirelli say the tyres would not have lasted the distance without blowing up or slowing drastically, as no-stopper in the Alpine, Esteban Ocon did in the final couple of laps, in which he was well over a dozen seconds per lap slower than his rivals.

Immediately after the race, Mercedes F1 boss Wolff, explained to Sky F1 the call to pit Lewis on lap 50: “We thought we could finish third without stopping or, if a dry line emerged, maybe going to a soft tyre. Then we saw Leclerc dropping off and Lewis was dropping off and it was clear we wouldn’t make it to the end.

“That would have been better than what we ended up with. But it was measured and in the car, he didn’t see how much he was dropping off. It was clear that had he stayed out then he would have lost out to Gasly.”

Later in the team report, Wolff continued, “With Lewis, we had difficult decisions to take throughout the race. We thought we could maybe hold out with him, not stopping, and take third place. Or, if a dry line appeared, maybe even bring him in and switch to the Soft tyre.

“The balance for us, therefore, was between pitting, taking it conservatively and fighting with Leclerc and Perez on track for P3 or, by taking a calculated gamble, have a chance to win the race or finish P3.

“As it unfolded, we could see Leclerc’s pace dropping off on the old Inter, shortly followed by Lewis and then we knew we couldn’t go until the end and needed to stop.

“At that stage, Lewis was losing 1.5 secs to Gasly and Perez and it would be a matter of time before he was caught. We settle for P5 and I’m happy with the decisions we took.

“There is always an absolute view and a relative view. The relative view is that in the last race, Red Bull were very happy to only lose seven points from a grid penalty – today we lost eight points so it isn’t the end of the world.

“The absolute view is that today, we could have scored another three, four or five points more. But that’s fine, the championship is wide open and the fight continues,” added Wolff.

On Sunday, Verstappen on 262.5 points turned a two-point deficit into a six points advantage over Hamilton with six rounds to go.

On the upside, Wolff was chuffed with Valtteri Bottas, who next year moves to Alfa Romeo: “Absolute dominance from Valtteri, a 10/10 drive from the get-go from him. He had the race under complete control, not only with his pace but his management of the tyres was fantastic. Well done Valtteri, a very strong weekend.”

After the 16th Round on Sunday in Turkey, Mercedes increased their F1 constructors’ championship to 36 points over Red Bull.