Perez: It was not an easy race for me 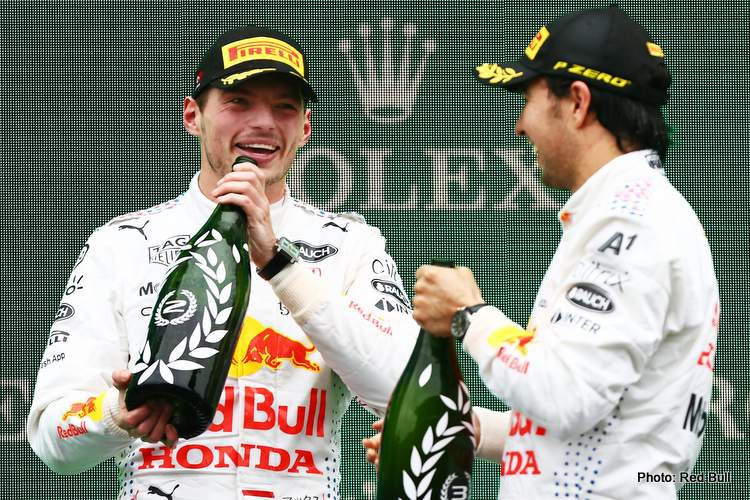 Sergio Perez admitted that his hard fought third place in Istanbul was not straight forward, and that the 2021 Turkish Grand Prix was not an easy race for him.

Perez was hired by Red Bull for one simple reason, and that is to have an experienced driver able to back up the team’s lead driver Max Verstappen in his quest to secure his first Formula 1 Drivers’ Championship title. He wasn’t able to do his job frequently, but fittingly compensated for that at Istanbul Park.

Perez qualified seventh in Turkey, but started sixth after Lewis Hamilton served his engine penalty, and was one of the cars Hamilton had to overtake on his damage-limiting drive from 11th. As it transpired, the Mexican’s RB16B was impossible to overtake despite the seven-time champion’s racing prowess. The fight between the pair on lap 34 turned out to be the highlight of the race.

Perez later spoke of his tough race in his team’s press release and said: “This podium is very special because it was not an easy race for me, it was hard and exhausting at times, so I am very happy this evening.

“It has been a while since I have been up there, I think the last two or three races we should have been on the podium, but we have been so unlucky. I got a good start, I think there was some contact between Fernando and Pierre into turn one so there were three cars, including me, and I thought we weren’t going to make it but in the end, it was a good result for me.

“After that I didn’t feel comfortable in the first stint with the car and I lost a lot of ground but then the second stint was all about pushing at the right time and using my experience to get a podium for the Team.

Of his epic battle with Hamilton, he said: “Lewis was closing in really fast and at that time I was struggling quite a lot with my tyres, he had good pace and I thought he might get past me but it turned into a good fight and I came out on top. Lewis is a top driver and it was enjoyable racing with him.

“When I was standing on the podium I saw a lot of Mexican flags in the grandstands, we are so far from home here in Turkey so it was lovely to see.

“I think there is a lot we can learn from this race, it is a good result for the Team and now we’re looking forward to Austin,” the Mexican veteran concluded.

Red Bull team boss Christian Horner described how the team handled the strategy with Perez, and said: “For us the crucial moment today was when to pit Checo, we could have kept him out to keep holding up Lewis, but we decided to pit him because we didn’t believe Hamilton’s tyres were going to make it to the end of the race.

Horner was full of praise for the Mexican: “Checo did an amazing job today, he raced Lewis just as hard as Max does. He went wheel to wheel with him and he actually ended up in the pit lane when Lewis ran him out there, and then it was a drag race down the start-finish straight and he just stuck with it.

“The next race in Austin has been a Hamilton strong hold so we are going to have to be at the very top of our game, it’s great to be in this fight and the whole team is really enjoying it,” Horner concluded.