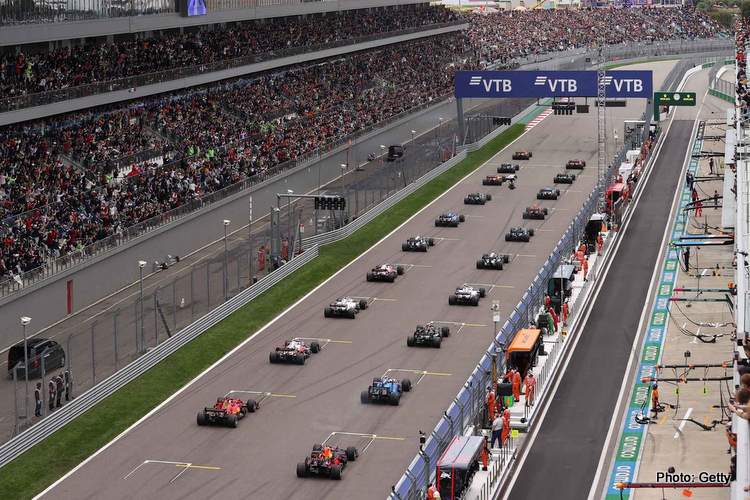 Usually the Russian Grand Prix at the Sochi Autodrom isn’t the most enthralling race weekend of the year, but this is the 2021 Formula 1 season, so of course it was totally awesome.

With rain causing havoc on track and completely mixing up the order come the chequered flag, it brought around a weekend of historical achievements and painful heartbreak in equal measure.

So here we go, this is my ratings for the 2021 Russian Grand Prix.

Having secured his 100th win in F1, Lewis Hamilton endured one of the toughest wins of his career.

The Russian Grand Prix weekend was one of two halves started on Friday with Hamilton crashing into his front jackman, an unusual mistake for Hamilton, which wouldn’t be his last in Russia.

Saturday didn’t see fortunes change for the 7-time World Champion, as he crashed in the pit entry during Q3, ruining his and teammate Valtteri Bottas’ qualifying runs.

Come race day, a slow start due to lack of room forced Hamilton further back than he would have liked, but this soon changed after his pit stop with some impressive lap times and catching leading car Lando Norris.

The weather prevented a battle of the British drivers in the dry, but it was the experience from Hamilton and his Mercedes team to swap for the intermediate tyres, ultimately earning him his historic 100th win.

Not a perfect weekend by any stretch of the imagination, and on any other weekend he probably wouldn’t have been on the top step of the podium, but it’s one I’m sure Lewis Hamilton will not forget soon.

What are you doing in P2 Max Verstappen! Starting from the back of the grid due to penalties for his new engine was always going to make this weekend difficult, but his start was solid and made light work of Valtteri Bottas passing him in the early stages of the race.

At one point in the race he was within touching distance of Lewis Hamilton, but momentum soon shifted as he had to pit early off the hards onto the medium compound tyre, forcing him back to P7.

But mother nature was on the Dutchman’s side as the rain come down, Verstappen was able to capitalize by pitting early for the intermediates, passing everyone in and around him on the track.

Ultimately on a weekend where low expectations and damage limitations were probably at the forefront of Verstappen and Red Bull’s minds, it has worked out to be a very good weekend in terms of the championship picture.

A race of mixed emotions for Carlos Sainz in Sochi. After lap one it looked like a win could be on the cards, having overtook former teammate Lando Norris going into Turn 2 even after a relatively poor start off the line. But having kept Norris at bay for a short stint, the Brit managed to overtake Sainz.

Things then began to go badly for the Spaniard after his early pit stop, but after consistently good lap times he was rewarded with great fortune from there on in. A slow Sergio Perez pit-stop, and well timed pit stop during the chaotic rain period allowed him to leapfrog Daniel Ricciardo and secure P3. All in all, a huge positive for Carlos Sainz as he secured his third podium for the Scuderia.

Starting to show some good consistent pace in the McLaren is Ricciardo. A strong start of the line helped him jump Hamilton and keep him at bay. Then a poor pit-stop seemingly ended all hope of a podium finish, but the Aussie worked well to climb back up the field in merit and amongst the chaos. It’s nice to see Ricciardo getting back to his best as it seems.

Similar to Verstappen, what are you doing in P5 Valtteri Bottas. Starting P17 due to an engine change, some people believe this was a tactic to cause Verstappen problems. But as we’ve seen time and time again, his defensive driving is just non-existent at times. Bottas then proceeded to sit well outside the points until the rain came along, and a well-timed pit-stop allowed him to shoot up to P5. Lucky to be this high up and that’s why the rating is so low.

He’s just still an exceptional driver, isn’t he? This was arguably one of his best drives since coming back into the sport, but due to poor TV directorship, it wasn’t highlighted as much as it deserved to be. A fantastic 37 lap stint on the hards helped his race massively, as fresh tires helped him pass Verstappen to claim P6.

Passing the three drivers of Ricciardo, Sainz and Perez in changing weather conditions was simply outstanding driving but stayed out one lap to late and ended up losing all the places he deservedly gained. Top work once again though!

Can we all just have a moment to share our heartfelt love for Lando Norris. Nine times out of ten, I would be here rating Lando Norris a TEN rating for his thoroughly deserved maiden win in Formula One. But isn’t this sport just cruel.

Saturday was a day of huge celebration as his blistering Q3 flying lap landed him his first Formula One pole position, with this momentum carried into Sunday

Although losing out to Sainz on the opening lap, he gained P1 back and then spent the majority of the race leading and showing his class, however changing conditions and poor judgement from him and the team left him out and driving the very wet track on slicks. Having to ultimately box, he slipped right down the order.

And don’t be blaming Norris for staying out in the rain, because remember it’s easy to judge given the hindsight that everyone has after the event. His race win will come soon, and days like this will make it more the sweeter.

We’ve all missed you Mr. Räikkönen, and you’ve made us all smile with this P8 performance. Started well, and gained places to get P8 and stayed in the points on merit. He kept it ice cool in the tricky circumstances and gained big points for the team.

Deserved better did Perez. Mr. tyre management was at it again, making his hard compound tyre last 37 laps and whilst doing so keeping up with Hamilton in front on the mediums.

But then a very poor pit-stop and bad call staying on the slicks in the rain ended all momentum for Perez, resulting in a finish which he didn’t deserve.

The race pace though should improve the Mexican’s confidence, even with a race weekend with little points.

He loves finishing in the points now does George Russell, and I’m all for it. Secured P3 on Saturday which again shows his ability to out-perform that Williams car in such a consistent basis, and although the high grid position, a P10 is still a great result for the team given their race distance pace.

He held his own in the top order for a large number of laps before eventually falling off simply due to the car and an early pit-stop being the wrong strategy.

Hugely mixed emotions for Stroll in Russia. A fantastic start saw him jump right up to P4 but fell down to P8 where he stayed consistently for a long stint.

A ten-second penalty was awarded for his incident with Gasly after he had already hit teammate Sebastian Vettel, and that’s never going to help the fight for a points finish is it.

Showed some excellent spells in the race but ultimately never looked like things were going to go his way. A bad qualifying started the weekend off in poor fashion, but he started the race well and held P10.

He then made steady ground after his pit-stop and reached the Top Ten, but then, the rain. This forced him back in places and ended him up here in P12. He deserved much more but its just one of them races.

Didn’t look himself this weekend did Gasly, which is unusual to see. Knocked out in Q3 was very much a surprise to everyone given his recent masterclasses in qualifying, and this basically set the tone for the race where he never looked like scoring points. Hopefully juts a one-off weekend for Gasly.

Didn’t really see anything from Ocon during the race. Beaten convincingly by teammate Alonso all weekend really summed it up for Ocon and finished where he deserved to finish.

The rain really didn’t like Charles Leclerc did it. He started the race at Sochi in fine fashion, gaining numerous positions in the opening phases, and when he was given new tyres after an impressive first stint, he got himself into the top ten.

Like so many though, he stayed on the slicks when the weather turned sour and ended all hope for anything points-wise. A real shame as before the rain he had a stellar drive.

Not one of the Italian’s finest drives, as he was easily beaten by his returning teammate. It was also not the kind of result you want to be having when your potential future in the sport is uncertain. But given he lost radio communications with his engineer on the first lap, it was always going to be a long day at the office.

I think he’s incredibly lucky to have a seat for next season, because his form in recent weeks has been outright bad. After an impressive Saturday, all this was for nothing with his race pace being just so slow, which doesn’t help when silly errors are also being made.

Being the only home driver this weekend didn’t inspire Mazepin to an out of this world performance, but really what can you expect with his machinery.

A good start was impressive from the Russian as he climbed to P12 but was soon back at the back of the pack.

Qualified well but like many was given a new engine and so, started near the back. Didn’t do much in the race then crashed in wet conditions. Onto the next, I guess.

Out-qualified his teammate at Sochi and managed to pass Mazepin before retiring, so it’s not all bad news for the German.