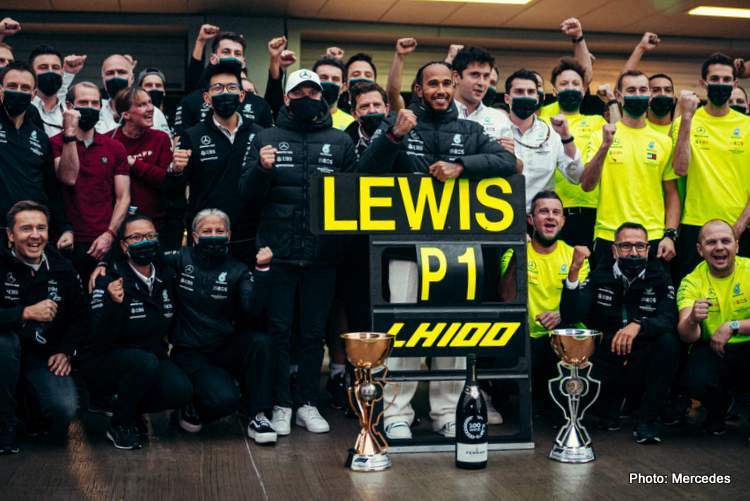 Lewis Hamilton hailed a “magic moment” on Sunday after becoming the first Formula 1 driver to win 100 Grands Prix, his Mercedes team boss Toto Wolff also hailed the achievement, sealed with a victory at the 2021 Russian Grand Prix saying it was simply “mind-blowing”.

If the milestone took longer to reach than many had expected, with F1 seven-time world champion Hamilton fending off questions about possible jinxes before the Sochi weekend, it was worth the wait.

Only four drivers have reached even a half-century of wins since the championship started in 1950, a statistic skewed by the fact that early years featured as few as six rounds compared to the current 22, as a driver’s longevity was limited back then.

Hamilton is way out in front, having roared past German Ferrari great Michael Schumacher’s previous record of 91 last season.

The sport’s most successful driver of all time is now leading the championship again, this time by two points from Red Bull’s Max Verstappen.

“It’s a magical moment,” said the 36-year-old. “I have dreamed of still being here and having this opportunity to be able to win these races and get to drive with such phenomenal talents this late in my career.

“This is a special moment for everyone that’s been a part of it. I’ve had the most incredible team… there’s too many to name.”

Hamilton said that, just like his on first win in Canada back in his debut 2007 season with McLaren, his father Anthony had spoken to him on the night before.

The Briton told reporters he had taken nothing for granted, sometimes even doubting it was going to happen — although Mercedes have yet to be beaten on the Sochi circuit since the first race there in 2014.

Wolff said it would take time for the full extent of Hamilton’s achievement to sink in.

“I think we are witnesses to a career that is just amazing,” the Austrian told Sky Sports television.

“The 100th race victory is just mind-blowing. Today we talk about it and it’s going to be in the news for 24 hours but only many years down the line are we going to realise that we’ve been part of that.

“We realise that we are part of a journey that no other sportsman in Formula One has done so far and that is beyond the races that we have won or championships,” added Wolff.

“That is, from the human aspect, to be part of this is special.” (Reporting by Alan Baldwin)