Hamilton: I wasn’t even sure the 100th would come 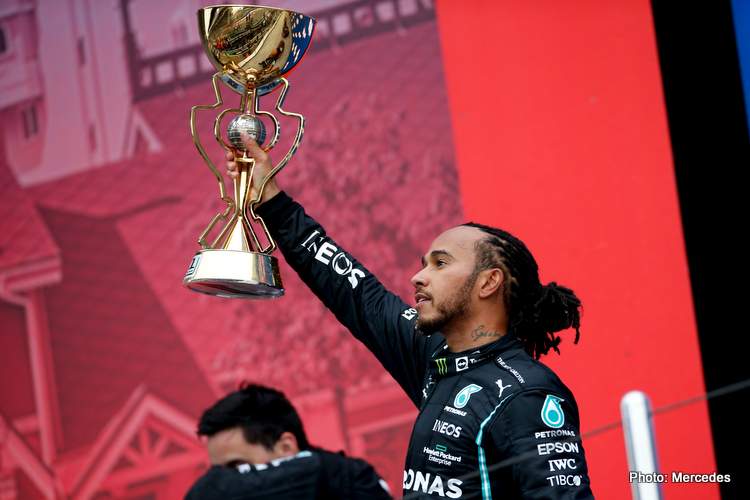 Sochi had been more than kind to Lewis Hamilton, and this weekend’s 2021 Russian Grand Prix was no different, as the Mercedes drive secured his fifth win at the venue; most importantly his 100th career victory.

Hamilton rewrote the Formula 1 record books again this Sunday at Sochi, with his win being his 100th, 5,222 days after his first at the 2007 Canadian Grand Prix. That makes him the most driver to win races in F1 history and at the age of 36. His quest continues to secure a record breaking eighth drivers’ title this year, with a gladiatorial fight with Red Bull’s Max Verstappen going down to the wire.

Today’s race was not straight forward however. Despite title rival Max Verstappen being set to start at the back of the grid for taking an extra power unit, Hamilton and his team messed up the qualifying session held in rainy conditions, which meant Hamilton had to settle for fourth on the grid.

His start to the race was not ideal as well, as he lost several positions, then had to play catch up, but a combination of proper tyre management and superior pace meant he was breathing down race leader’s neck Lando Norris close to the end when the rain hit. Mercedes made the right call to put Hamilton on intermediates, while McLaren faltered’s, and the Briton ended up winning his elusive 100th.

Hamilton expressed his relief for completing this milestone win, he said: “Wow… 100! It’s taken a long time and I wasn’t even sure the 100th would come!

“Going to bed last night I wasn’t the happiest with the job I did yesterday. I watched the replay over and over again; they were subtle mistakes but I was so determined to put things right when I woke up this morning,” reflected Hamilton on his subpar qualifying.

“Today was tough – I lost a lot of ground at the start, just trying to stay out of trouble. I was patient and at the end, when the rain came, I didn’t want to let Lando go by boxing. Of course I didn’t know what the rain was doing, it was just my feeling but I’m incredibly grateful to the strategy team for the job they did today.”

Hamilton didn’t forget the team behind his success: “Getting anywhere near 100 victories wouldn’t be possible without the hard work of the men and women here and back at the factory, I’m so grateful to them – it just feels so special.”

He also acknowledged Norris’ performance: “Lando did an amazing job today, he had incredible pace and he’s doing such a great job for McLaren. It was bittersweet to see my old team ahead, they’re doing so well powered by Mercedes and it’s good to see them united again.

“Max did a good job to come up from second to last, the battle continues and we know we need to be on top form over the remaining races,” concluded Hamilton wary of the difficult title fight ahead.

His teammate Valtteri Bottas who dropped to 17th on the starting grid for getting a “tactical” new engine (he started 16th after Antonio Giovinazzi’s gearbox penalty was applied), looked set for a disappointing result, but was saved by the rain at the end of the race to finish fifth.

Bottas reflected on a tough day in the office: “Firstly, congrats to Lewis on the win and his 100th victory. From my side, it was a difficult race and not an easy day, but the situation at the end with the rain saved it for me.

“Before that, I was struggling to progress through the field. It was much more difficult than I thought it would be, because I just couldn’t follow through the corners – I was getting big understeer. I couldn’t carry the speed and get close enough to overtake, and other cars were finding it easier to follow closely.

“Then the rain arrived, I wanted to stop one lap earlier but the team wasn’t quite ready, but we were still one of the first cars to stop, which was good. I managed to climb up the order and score some good points, which is positive after a tricky day,” said a relieved Bottas after scoring some good points for his team.

Hamilton heads to Turkey in two weeks time with a 2 points lead in the drivers’ championship, whereas his team retains the first position in the constructors’s standing by 33 points to second-placed Red Bull.

To the Mercedes family. This one is for you. ❤️