Sochi FP3: Cancelled due to torrential rain, qualy in doubt 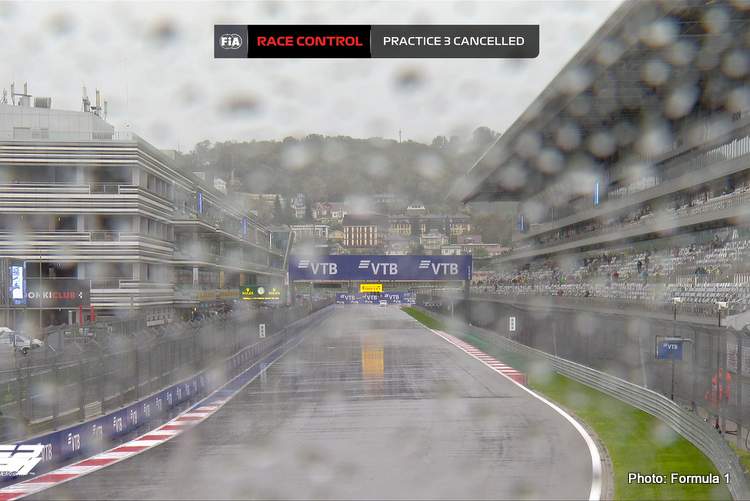 Saturday at Sochi did not start well, with torrential rain, thunderstorms, and lighting bolts taking center stage, instead of Formula 1 action.

Earlier today, FIA racing director Michael Masi explained in an interview with F1.com how they planned to deal with the curveball mother nature threw at them.

Later on, the FIA confirmed that the third free practice session is cancelled due to heavy rain. The session was initially scheduled to start at 1200 local time. It was not the first casualty today as the first Formula 2 sprint race was also scrapped.

“In the interest of safety [the decision has been taken] to modify the Official Programme by cancelling Free Practice Session 3 due to Force Majeure,” stated the decision by the stewards.

“For the purposes of the regulations and associated time limits, Free Practice Session 3 will be considered as having taken place, except where otherwise advised by the Race Director.”

With the fate of FP3 now sealed, all eyes are on the F1 qualifying session scheduled at 1500 local Sochi time, and whether it will also be cancelled as well, and held on Sunday.

The last time F1 had a Sunday morning qualifying was in Japan 2019.

“From what we are seeing from the forecast side…we will have sort of this level of rain until about 1.30 to 2pm local time and then it decreasing in the afternoon,” said race director Michael Masi.

“The priority from today’s perspective is obviously Formula One qualifying this afternoon, so Formula One will take priority.”

Masi said the light would be the determining factor in how late qualifying could be postponed until.

“Sunset locally is about 1815…but with weather conditions like this obviously (the) light diminishes far earlier,” he added.

“If qualifying isn’t able to happen today, as we’ve seen a few times before in the past, then we will redo the programme and hold qualifying on Sunday morning.”

No track action yet in Sochi but the heavens are putting on a proper show ⚡️😮#RussianGP #F1 (🎥 @Formula2) pic.twitter.com/b57p3taqyx

No track action yet in Sochi but the heavens are putting on a proper show ⚡️😮#RussianGP #F1 (🎥 @Formula2) pic.twitter.com/b57p3taqyx