Verstappen: Impossible to pass with my top speed 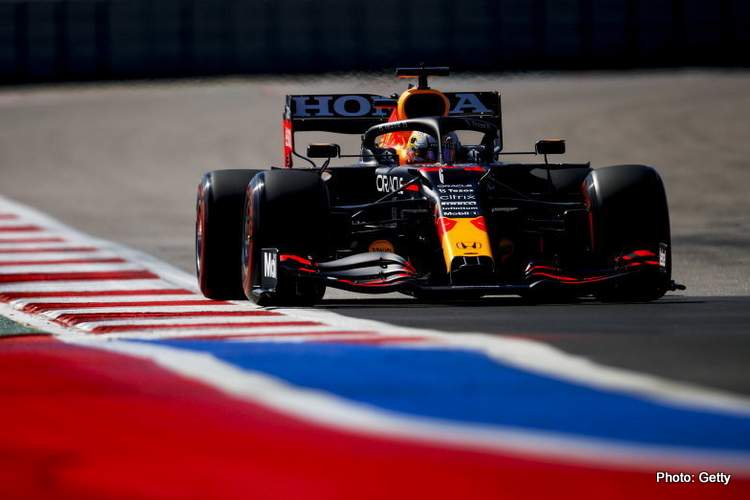 Red Bull have opted to take an engine penalty for Max Verstappen for the 2021 Russian Grand Prix, believing that Sochi will provide overtaking opportunities as they go out for damage limitation on Sunday.

With a three-place grid penalty for his involvement in the collision with Formula 1 title rival Lewis Hamilton at Monza last time out, adding the extra penalties for the PU change makes perfect sense.

However, during FP2 on Friday an exasperated Verstappen, with a new Honda engine bolted to his RB16B, reported over the radio “impossible to pass with my top speed” as he struggled to pass the Mercedes-powered Williams of Nicholas Latifi, during the course of the one-hour session.

That hardly bodes well for a driver starting the race at Sochi Autodrom from the back row of the grid, however, Verstappen pointed out the positives in his team’s Friday report: “We thought it would be best to take the engine penalty here in Russia, we took everything into account before making the decision and we, of course, considered the weather for tomorrow.

“We had to take the penalty at some point so if we didn’t take it here, we would have taken it somewhere else. As for the setup, we are trying to make the best possible race car for this weekend despite starting from the back of the grid.

“I hope it’s going to work out and we will try to make the best of it during the race on Sunday, for now, let’s wait and see what the weather will be like tomorrow,” added Verstappen who leads Hamilton by five points in the 2021 F1 drivers’ standings ahead of Round 15 in Russia.

Verstappen ended the day sixth fastest, while Sergio Perez was only good for 11th in the sister car. With his teammate starting from the back, all eyes will be on the Mexican taking the fight to Mercedes, but clearly has work to do to close the 1.3s gap to Valtteri Bottas in top spot.

The Mexican veteran tends to get up to speed as the weekend progresses, and will be needing to have his A-game for qualifying on Saturday.

Perez summed up his day in the team report: “We have some good information going into qualifying tomorrow when there won’t be much running due to the rain, so today was probably the last chance we have to test the dry conditions before qualifying.

“I think there is potential in the car for this weekend, we just have to make sure we get it right. I think my first and second sectors looked good but there are some areas to improve in the third sector.

“There are some set-up changes we might need to make to the car to suit the weather conditions come qualifying but there are still a lot of interesting things to be analysed later on this evening.

“With Max starting from the back, it is going to be a bit of a challenge as a Team and obviously Mercedes are very strong around here but hopefully we are able to put some pressure on them and qualify very close to them, that would be ideal,” added Perez.