Jessica Hawkins: I’m not finished with the racing dream 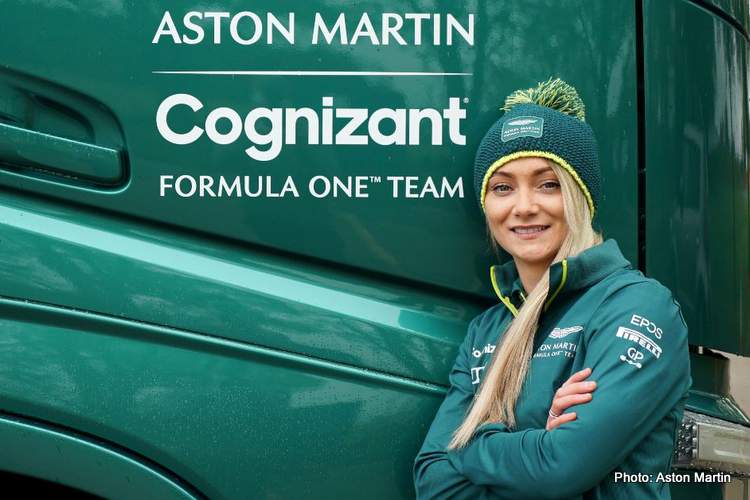 Aston Martin driver ambassador Jessica Hawkins was at Monza over the past weekend for the Italian Grand Prix in her role assisting the team, editor Will Dodds spoke to her.

Now a few months into her role with the Silverstone outfit, the W Series racer is balancing the position with her on-track responsibilities as a driver.

After she made a slow start to the second-ever W Series campaign, Hawkins has been in the points for each of the last three races, including a season-best fifth place at Zandvoort over the Dutch Grand Prix weekend.

Having supported DTM during its inaugural season in 2019, W Series became part of the support package for Formula 1 this year, with two races remaining at Circuit of the Americas in the USA and Autodromo Hermanos Rodriguez in Mexico.

Meanwhile, the 26-year-old will continue her work with Aston Martin, and continue to pursue her goal of racing in the British Touring Car Championship.

Hawkins sat down with Grand Prix 247 ahead of the Italian Grand Prix to talk about what has been a busy year for her personally.

“I don’t think it’s any secret that I’ve not been pleased with my results earlier on in the year,” she said. “I did anticipate a tough start to the season just because I’ve spent so long out of the seat – I’ve only done two races in two years and I’m competing against people that are regularly racing and testing those cars.

“I do feel like we are getting back on track now and this is how I saw the season going really so I am hoping for a strong finish at COTA and in Mexico.”

Although W Series was forced to take a year off in 2020 as a result of the COVID-19 pandemic, it managed to build on the momentum of a successful debut and secure a slot on the F1 platform, with Hawkins and her rivals given the opportunity to race a number of circuits for the first time.

“W Series did such a great job in its first year on the DTM package that there was only one place for it to go really and that’s at the pinnacle of motorsport,” she explained.

“I’ve not raced any of the circuits before, even Silverstone despite living only half an hour away. Well, I have raced around the national layout and had some great success there, but all the other tracks are brand new to me. It’s not ideal learning them, especially as we only have one free practice, but that makes the simulator time all the more important.”

With two races to go, the goal for Hawkins is clear: “I would really like to finish on the podium. I believe that is a tall ask but equally I think it is achievable. Obviously, there are so many things that need to slot into place for that to happen, but I’ll do everything within my power to make sure that’s possible. There are a lot of people that have worked very hard this season, so I’d like to reward them with a good result.”

Hawkins joined Aston Martin in May of this year as a driver ambassador, a role created following the brand’s return to F1 over the off-season.

Starting off with an initial conversation, things moved slowly at first, but she has since settled in well to the role while not on W Series duty.

“It first started many months ago, but it was nothing more than being asked if the role was available, would I be interested,” she said.

“And I didn’t really hear much more than that for another six months maybe, but then it came around very quickly and we got into contract talks very quickly.

“Since then, I’ve been part of the team, and even within just a few hours of being the track for my first day with the team I felt very much a part of the operation. It was a very warm welcome back to the team this weekend after a few weeks away with W Series and I’ve missed everyone here. Everyone was asking me about my races at Spa and Zandvoort which was a really nice feeling.”

Through her role with the team, Hawkins has been able to work closely with Sebastian Vettel and Lance Stroll, Aston Martin’s F1 drivers, including learning from them while out on track walks prior to the start of a race weekend.

“They’ve both been fantastic,” she said.

“I’ve been on a few track walks with them now and actually I went on a track walk here at Monza. We got about halfway around, and Seb actually pointed out some of the banking from the old circuit. I said that I had never been to Monza before, so he said he would take me to the banking.

“So, at the end of the track walk we went to have a look, which was really nice. Even on my first weekend he was asking me about my racing. He doesn’t have to give me as much time as he does, but I think he really does make time for his team, which is lovely because he’s got such an amazing CV.”

When asked about whether a full-time role with BTCC could be an option in the future, she explained: ”Growing up I watched F1 and touring cars on TV all the time, and touring cars is probably a little bit more achievable for me in my career, and that’s really honestly where my heart lies. While I’m not in a position to be signing contracts now I think that a full season isn’t completely out of the question.

“I know one team in particular that I’d really like to be with, and I know they’re keen to have me as well, but there’s a few things that need lining up before that. I certainly have unfinished business with touring cars.”

Outside of racing and Aston Martin, Hawkins has also been successful as a stunt driver, firstly with the Fast and Furious live shows and now with the new James Bond film, No Time to Die.

“I kind of went down that route because I had run out of money to race, and an opportunity arose to be part of the Fast and Furious live shows,” she said.

“I thought ‘I’ve got no money to go racing so I’m just going to go and do it’. I had never really done drifting before, but I took to it quite well and I ended up getting this job. I did a few years with the live shows travelling Europe, and it was one of the most incredible experiences of my life.

“That then snowballed into movies after I met people and started to go down that direction. It is something that I’d always like to fall back on, but certainly for now I’m not finished with the racing dream,” declared Hawkins.