Hakkinen: Zak and Andreas have done a brilliant job 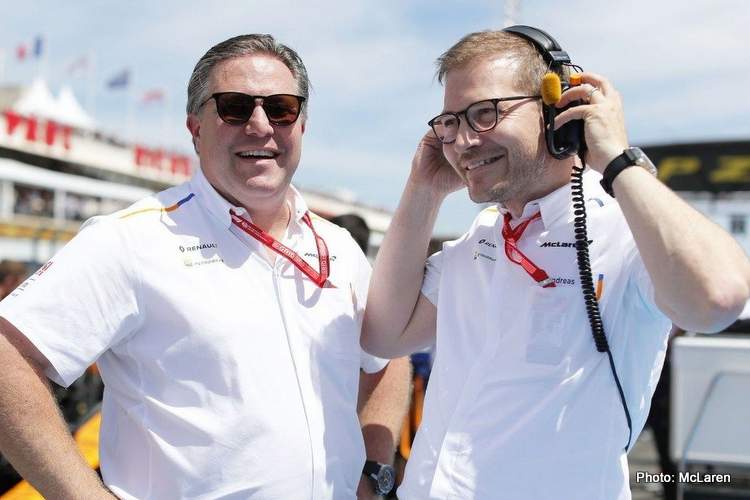 Mika Hakkinen won his two Formula 1 world titles with McLaren, thus when they powered to a sensational one-two at the 2021 Italian Grand Prix, the Flying Finn was overjoyed for his team.

Until recently it has been lean years for the once mightiest F1 team of all, whose driver roster over the years is a list of some of the biggest names in motorsport folklore. But in 2017, with the team in freefall thanks to a disastrous Honda partnership, their long-standing patron, Ron Dennis was ousted and in his place came Zak Brown, taking the helm of a damaged and sinking ship his predecessor left him.

Much has happened since then, but Brown weathered early criticism as he sought to rebuild McLaren, and has done so admirably, defying the doubters, to reestablish the Woking outfit at the sharper end of the grid.

The addition of former Porsche WEC team boss Andreas Seidl proved to be a masterstroke, as has been the development of Lando Norris into a formidable race driver and with victory at Monza, Daniel Ricciardo has taken the top of the podium for his eighth F1 victory, and his first since 2018.

Reflecting on the weekend at the Temple of Speed, Hakkinen wrote in his Unibet column: “Zak Brown and Andreas Seidl have done a brilliant job to lead the team into this era. It is an exciting time for everyone involved.

“I am so very happy for everyone at McLaren for achieving a fantastic 1-2 in Italy on Sunday. It’s a brilliant result, and one that they have worked very hard to achieve.

“Having won both my World Championships for McLaren I know the team well. I also know what this victory means to them. Nine years is a long time to wait between race wins, especially for a team which has won 20 World Championships.

“To rediscover the winning formula is never easy in this business. During the 2015-17 partnership with Honda the team realised that it needed to take a new approach to F1. What we saw on Sunday was the result of that new strategy.” 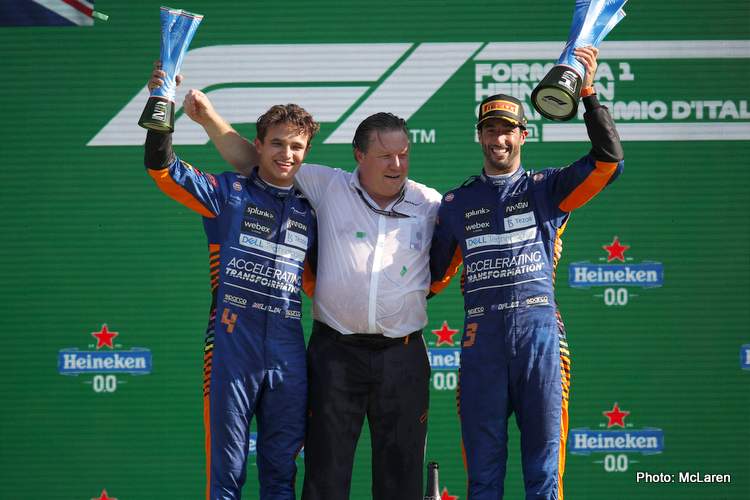 Norris has been shining all year. As a result, he is fourth in the championship standings on 132 points with eight rounds remaining. Ricciardo, on the other hand, was out of sorts throughout the first half of the season, so much so that even after scoring maximum points at Monza, he is still 49 down on his young teammate.

However, the Dan of old has been emerging since the summer break, with Italian Grand Prix victory his reward and a pleasant surprise for F1 fans, as the big smiling Aussie remains one of the most popular drivers on the grid.

Hakkinen was also impressed: “To see Daniel and Lando finish first and second on merit, controlling the race after a strong performance in Friday qualifying and Sprint Qualifying, was quite special.

“Daniel has taken time to settle into the team, but this is completely normal. It took me four years to win at McLaren – it has taken him six months. A new team means learning how to work with new people, adapting your style to their way of working, understanding the way the car works and all its complex systems.

“There is nothing easy about this, so Daniel has had to work hard. Winning the Italian Grand Prix is his reward and it will really boost his confidence,” explained Hakkinen.

Listen to just how much this win meant to @danielricciardo 🧡#ItalianGP 🇮🇹 #F1 @McLarenF1 pic.twitter.com/fYPRDDLcwt

“In Lando, he has a very young, quick, talented teammate who has been working with McLaren for four years and driving for them in F1 since 2019. He has been one of the big stars this season, finishing in the points at every race apart from Hungary and making it onto the podium three times.

“I am sure he wanted to be the driver who would take McLaren’s first win, but he did the right thing to show his speed yet support his team mate and secure the one-two. His day will come.

“Together Daniel and Lando make a formidable combination and it has been clear for some time that the team was getting closer and closer to scoring a win. All it took was for Red Bull Racing and Mercedes to have a less-than-perfect day and McLaren was in a strong position,” added Hakkinen, the 1998 and 1999 F1 World Champion.

Stats show that after Daniel’s triumph on Sunday, McLaren now have 183 Grand Prix victories to their credit, second only to Ferrari on 238 wins.

A brave and brilliant move from Norris to get past Leclerc 👏#ItalianGP 🇮🇹 #F1 pic.twitter.com/iU1i1hLWlf