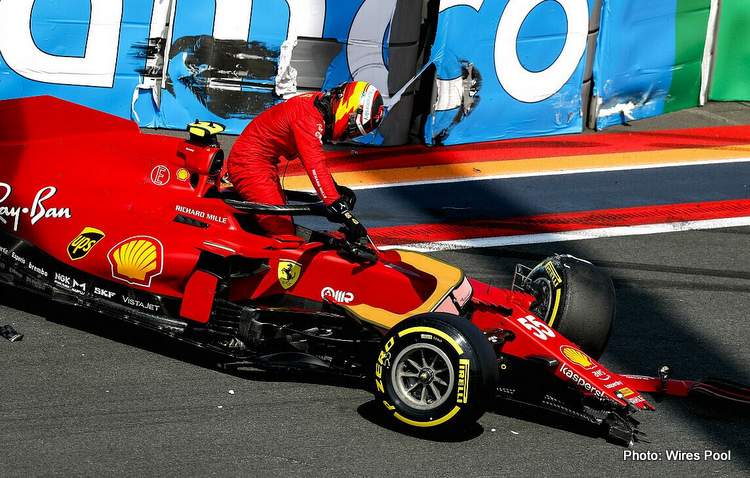 His crash at Zandvoort on the banked Turn 3 prompting queries from readers about what goes on in a Formula 1 garage in the aftermath of a crash.

Time and time again we see teams step up with remarkable efforts rescuing their damaged cars from the doom of not qualifying for, or not starting a race, so much so that the repeated remarkable successes to repair can give the perception that getting a badly damaged F1 car back on track is relatively straight forward, which of course is not.

If you’ve ever witnessed an F1 garage in rapid response repair mode and you haven’t worked in F1 yourself, at first glance you could be forgiven for thinking that it’s uncontrolled chaos,  but if you look harder you will soon see that it is a predetermined order of events designed to achieve the delivery of a fully functioning F1 car back to the driver by the next session, and as close to the required performance envelope as possible.

Quite simply what happens in the garage at this time is a very specific algorithm.

Let me run you through how I would expect the activity to pan out.

We all understand that F1 cars are complicated, expensive and in some ways fragile pieces of kit, and so within reason a team would generally prefer to have a scout team of 2 or 3 attend the car during its retrieval to ensure its ERS system is safe, that the car is loaded securely without damaging it, that any sensitive IP is covered, and so that a preliminary damage assessment can be called through to prepare the team for a quick response upon return to the garage.

Upon arrival and offloading back in the garage, the damage will be stripped to an extent allowing for the work lifts to raise it to waist height so that work can begin, depending on the degree of damage.

Critical to the whole process of repairing the car is the organizational structure of the team, what their responsibilities are, and how they all interact and communicate with each other.

In charge of the repair would usually be the car’s chief engineer who will be the focal point of the inspection data about to flow their way, and the repair direction to be taken.

In general, the specific front and rear end mechanics will inspect their areas of responsibilities, as will the PU, gearbox, electrical/electronic and other specialist technicians.

Quite often, not only will damaged sub-assemblies such as suspension corners, gearboxes, bell-housings etc. be removed for repair or replacement, but likewise will the undamaged ones be removed for the sake of more thorough inspection and non-destructive testing (NDT).

Each specific sub-assembly will have its own documented disassemble and install process with which the specific technicians and mechanics not only know back to front, but also have plenty of practical experience in.

Metallic components will be crack tested using ultrasonic equipment or dye penetrant, and composite components ultrasonic tested for delamination if need be.

A damaged composite monocoque does not always mean that it needs to be replaced, and teams will usually have multi-skilled staff trackside that can perform reasonably sized structural composite repairs to tubs in-situ using portable vacuum bags and pumps and mini-curing shrouds.

As we would expect, teams carry a plethora of spares, sometimes enough to build each chassis two times over, including spare tubs and even down to the level of complete spare wiring looms, and many will be transported as sub-assemblies ready for installation, such as suspension corners that will be pre-assembled with baseline settings.

Once a car has been stripped and re-assembled the wet loads such as hydraulic fluids, brake fluids, coolants lubricants and fuels will be loaded and lines pressurized and checked for leaks, PU oil pressure brought up and the brake lines bled.

The suspension will be then flat patched, or what others might consider to be a very detailed wheel alignment, where all four corners are attached to a very accurately levelled modular jig, and lasers used to help measure and set cambers, toes, dive, squat, ride height and sway bars, whilst accurate digital scale pads are used to set the corner weights and help set the centre of gravity position and height correctly.

A detailed wheel alignment is critical to the ultimate performance of an F1 car, but not critical to making the grid for the race, or to make a session, and on Saturday at Zandvoort, Ferrari had such little time to repair Sainz’s car that this step was omitted, which was the reason why his performance level in qualy was below the norm for him. His woes were compounded by the post qualy parc ferme conditions, ensuring he would start the race on a less than optimal set-up.

With a repaired car with properly aligned suspension, systems are brought online, the oil warmed up and the engine fired up and brought up to temperature, final leak checks are performed, and data checked to make sure system parameters are nominal.

The final step in the repair is the final approval by the chief engineer to lower the car back to ground level jacks and bodywork fitted.

Sometimes a serious repair can be performed in a matter of two or three hours in between sessions, and up to 25 people can be directly involved, and although it may be an intense and stressful environment, successfully returning a damaged car to the circuit in perfect condition in such a short amount of time can be very rewarding indeed.

Thankfully he is okay and gets out of his car. We are now under a red flag whilst we wait for the track to be cleared#DutchGP 🇳🇱 #F1 pic.twitter.com/PQCVaVpZQC