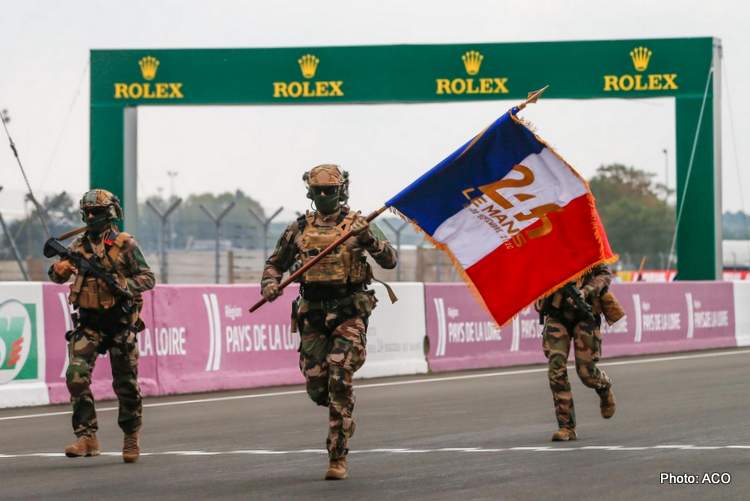 It’s the big day! The start of the 89th 24 Hours of Le Mans, the fourth of six rounds on the 2021 FIA WEC calendar, will be given at 16:00 sharp by Ferrari Chairman John Elkann.

After the support races, pressure mounts as the 24 Hours cars are placed on the pit straight, and only increases as the French national anthem, La Marseillaise, is played.

But it’s at 16:00, when the 62 cars are unleashed by the Race Director, that the adrenaline will be through the roof. Here we go for 24 hours of fierce battles and endless excitement!

Earlier in the day, from 11:30 to 11:45, the 62 teams will take advantage of one final free practice in preparation for the race. The session is the last opportunity to make sure the cars are performing well and to make adjustments as needed relative to the weather.

As a curtain-raiser and after two free practice sessions and qualifying, gentlemen drivers participating in the Porsche Sprint Challenge France will hit the track for their race between 09:00 and 09:45. Sixty drivers will compete at the wheel of 911 GT3 Cups and 911 GT3 Rs at a legendary circuit normallly reserved for professional and semi-professional drivers.

The Endurance Racing Legends event will show off 56 GTs and prototypes from the 1990s and 2000s during the second race between 10:15 and 11:00, proving the 24 Hours of Le Mans will live on forever.

From 12:15 to 13:10, Road to Le Mans competitors will hit the track for their second race, the fourth round of the Michelin Le Mans Cup season. This event is reserved for cars compliant with FIA GT3 regulations as well as LMP3s compliant with ACO LMP3 technical regulations.

Saturday is set to be the warmest day of the week with temperatures reaching 26°C, but there is a risk of storms and competitors in the race will be keeping a close watch on the weather forecasts.

“Storm cells are likely to develop to the east of Le Mans. This will be a short-lived phenomenon, but there is a risk between 15:00 and 20:00,” explained Pierre-Yves Guillerm, forecaster for Météo France Sports, the Météo France unit that works on all national and international sports events.

“The most difficult thing is pinpointing where and when the storms will break and the trajectory that they will follow.”

There is also a small chance of showers between 08:00 and 14:00 on Sunday. Such changeable weather could well add to the suspense during the race! Teams will need to interpret the forecasts and adapt their strategy accordingly.

“We often see differences in strategy. Some teams have their own weather experts for extra input,” the forecaster explained.