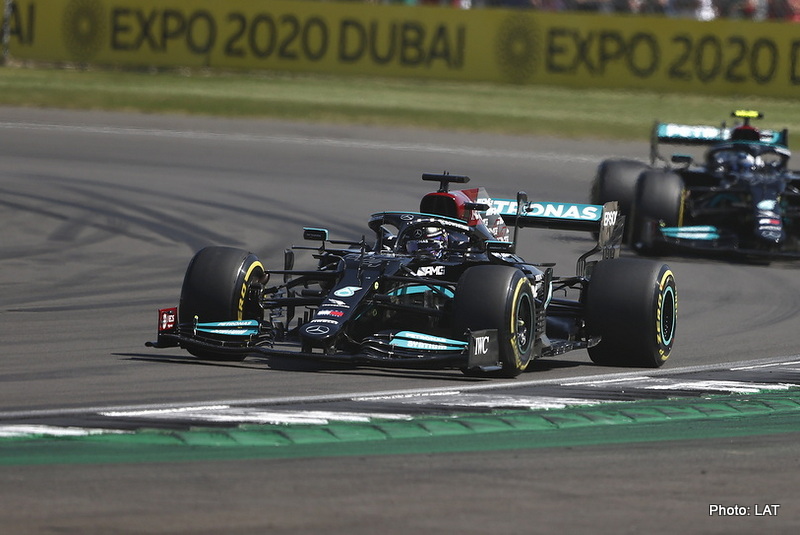 Lewis Hamilton won the British Grand Prix at Silverstone in dramatic fashion after a first lap collision with Max Verstappen that earned him a 10-second penalty.

With Hamilton starting second on the grid, he collided with polesitter Verstappen at Copse while trying to find his way past, sending the Dutchman into the barrier.

Verstappen was later taken to hospital and the red flag was brought out, while Hamilton picked up a 10-second penalty for causing the collision.

Charles Leclerc picked up the lead as a result of the crash having passed Valtteri Bottas on the opening lap, and held on until lap 50 when he was passed by the recovering Hamilton.

Leclerc finished second, while Bottas picked up third, but it will be the incident between Hamilton and Verstappen that will dominate the discussion around this race for days to come.

Following the red flag restart Leclerc retained his lead and was able to stay ahead until pitting on lap 30, two laps after Hamilton.

The 36-year-old served his 10 seconds while in the pits and came back out in fourth, behind Leclerc, Bottas and Lando Norris.

Norris had made a great start at the red flag to get past Bottas, but lost time following a slow stop and had to settle for fourth, just ahead of teammate Daniel Ricciardo.

Hamilton got ahead of Norris shortly after pitting, before Bottas was told to let him through on lap 41, with an 8.1 second gap to the leader and 11 laps remaining.

The seven-time British Grand Prix winner then set about chasing down Leclerc, finally passing him with two laps to go at the same corner he crashed with Verstappen at.

Speaking after the race, Hamilton said: “I always try to be measured in how I approach, particularly with battling with Max, he’s very aggressive. Then today I was fully alongside him and he didn’t leave me any space.

“But, regardless of whether I agree with the penalty, I take it on the chin and I just kept working. I was like ‘I’m not going to let anything get in the way of the crowd’s enjoyment of the weekend, the national anthem and the British flag’.”

“Congratulations to Lewis, he did an incredible job. It’s amazing to see so many fans in the grandstand. We definitely did not expect it. We have been fighting for the win, which is incredible.”

Carlos Sainz was sixth, after a slow pit stop cost him 12 seconds. The Spaniard had been on the two-stop strategy like Hamilton and Leclerc, but could not get past the belligerent Ricciardo, who held onto P5 brilliantly.

Fernando Alonso capped off an amazing weekend with a seventh-place result, the two-time champion never far away from the action.

Lance Stroll made a great recovery to finish eighth, despite starting back in 14th, with Esteban Ocon and Yuki Tsunoda rounding out the top 10 after a late puncture for Pierre Gasly, who finished 11th.

George Russell was 12th after a memorable weekend where the penalty he picked up on Saturday scuppered his chances, with Antonio Giovinazzi and Nicholas Latifi 13th and 14th.

Kimi Raikkonen had a late collision with Sergio Perez and finished 15th, just ahead of the Mexican who was 16th after a four-stop race that saw him deny Hamilton for fastest lap at the end.

Finally, Nikita Mazepin won the Haas battle from Mick Schumacher, while Sebastian Vettel retired following an early spin while in combat with Alonso. 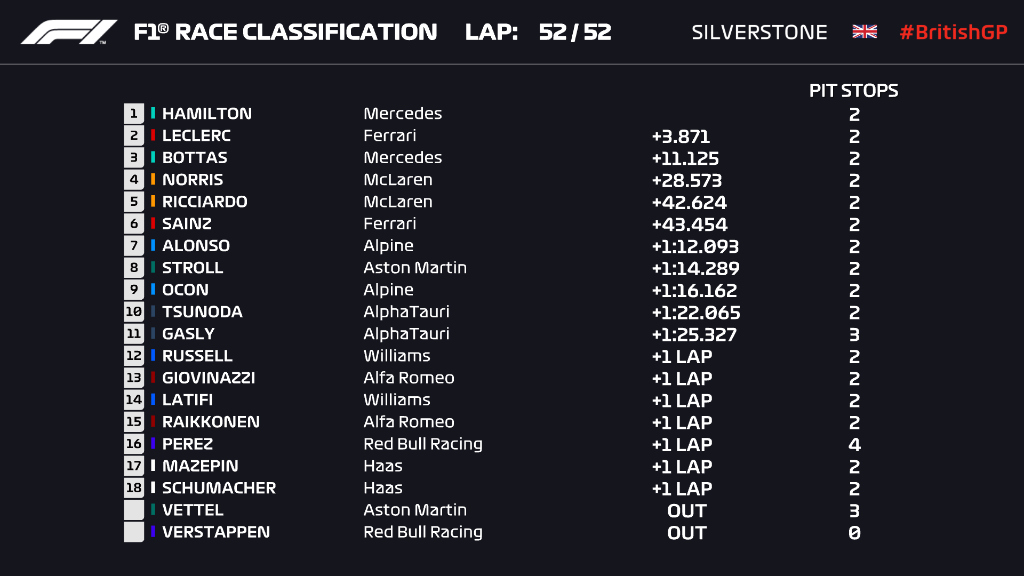